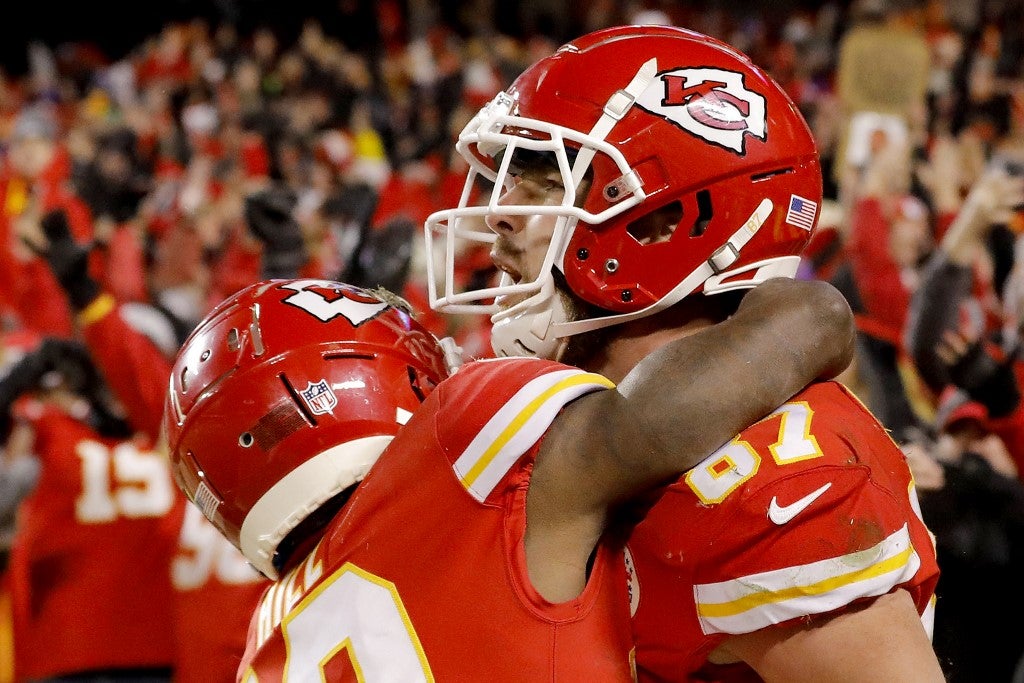 Travis Kelce #87 of the Kansas City Chiefs celebrates with Tyreek Hill #10 after catching the game-winning touchdown in overtime of the AFC Divisional Playoff game at Arrowhead Stadium on January 23, 2022 in Kansas City, Missouri. The Kansas City Chiefs defeated the Buffalo Bills with a score of 42 to 36. David Eulitt/Getty Images/AFP

Patrick Mahomes passed for 378 yards and rushed for 69 Sunday as the Kansas City Chiefs advanced to their fourth straight AFC championship game, outlasting the Buffalo Bills 42-36 in overtime in a divisional round matchup at Kansas City, Mo.

Mahomes completed an 8-yard touchdown pass to Travis Kelce on the first possession of overtime, which prevented the Bills from ever getting a chance in the extra session in an epic showdown for what could be a special rivalry for years to come.

THE @CHIEFS WIN THE GAME OF THE YEAR! #NFLPlayoffs #ChiefsKingdom pic.twitter.com/9eM2Ur15O0

“With that coaching staff and the players they have,” said Mahomes, “there’s going to be a lot of battles. I’m glad we got this one. We’re going to try to keep it rolling. We’ve got a good team coming in next week.”

Kansas City, the No. 2 seed, claimed its 11th win in 12 games but will host the AFC championship game next Sunday against the one opponent that beat the Chiefs during that stretch, the Cincinnati Bengals.

All of the AFC championship appearances on the Chiefs’ run (since Mahomes became their starter) have been at home, with the last two resulting in Super Bowl berths.

The teams each scored twice inside the final two minutes of regulation, generating 25 points during that span. Kansas City forced overtime on a 49-yard field goal by Harrison Butker as time expired.

Before that, Bills quarterback Josh Allen fired touchdown strikes of 27 and 19 yards to Gabriel Davis, the last coming with 13 seconds remaining.

Mahomes responded by hitting Tyreek Hill with a 64-yard touchdown. Later, when he took over with 13 seconds left, he hit Hill for 19 yards and Kelce for 25 to improbably set up Butker.

“Every time he (Mahomes) comes in the huddle, he says, ‘Let’s be great,’ and it’s not corny when he says it,” Reid said.

Bills coach Sean McDermott termed the performance a “tremendous effort by Josh,” who connected with Davis for four touchdowns, while finishing with 329 yards passing and 68 yards rushing. Davis caught eight passes for 201 yards.

“Josh played his ass off,” Mahomes said. “This was a great game between two great football teams and at the end of the day, Tyreek and Travis made plays to win the game.”

.@PatrickMahomes left the celebration and ran across the whole field to find @JoshAllenQB.

Mahomes engineered touchdown drives of 11 and 12 plays in the first half. He rushed for 49 yards on the first series, including an 8-yard score, and found Byron Pringle for a 2-yard TD pass with 1:52 remaining.

For the half, Mahomes totaled 163 yards and Allen 158, with no turnovers.

A 50-yard field-goal attempt by Butker sailed wide right at the halftime buzzer.

Read Next
NBA: Karl-Anthony Towns takes over in 4th as Wolves down Nets
EDITORS' PICK
EDITORIAL: To a bike-friendly future
House energy committee chair Arroyo bats for cheap electricity
Pagasa: Warm, sunny Sunday in most parts of PH
Is it safe to talk politics again at family gatherings? ‘The Reconciliation Dinner’ shows us what that’s like
vivo’s coming to town to grant wishes with more holiday promos
The Best Tech Gifts For The 2022 Holidays
MOST READ
LOOK: Vhong Navarro transferred to BJMP detention facility in Taguig
The Elephant Man in the Senate
Posh village as ‘shabu’ haven
LOOK: Zanjoe Marudo bonds with Ria Atayde, her family
Don't miss out on the latest news and information.