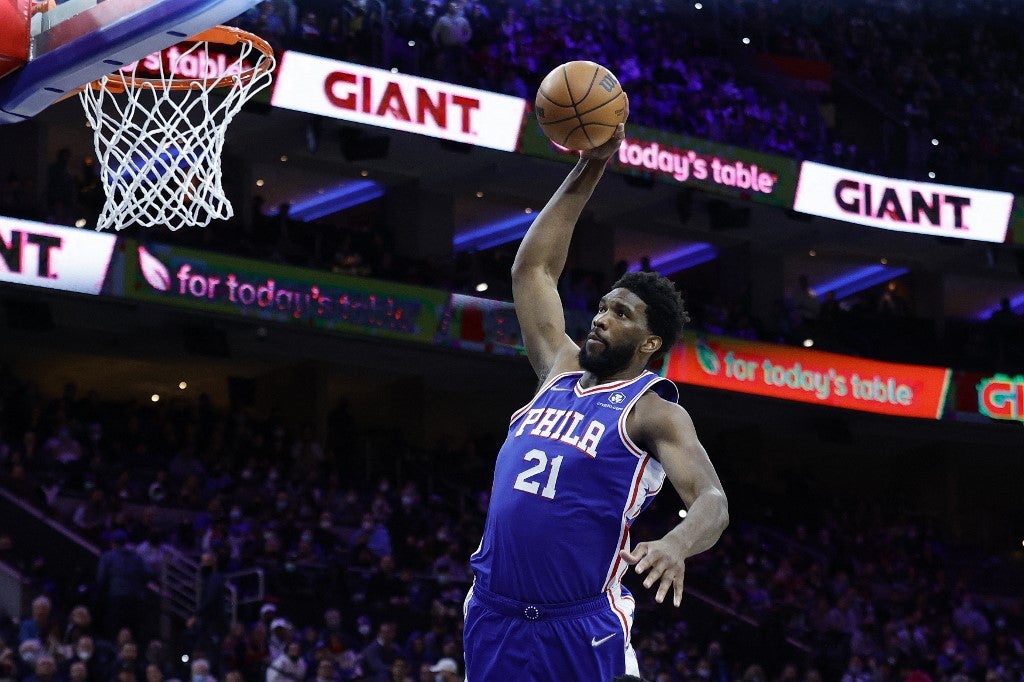 FILE – Joel Embiid #21 of the Philadelphia 76ers elevates for a dunk during the fourth quarter against the Boston Celtics at Wells Fargo Center on January 14, 2022 in Philadelphia, Pennsylvania. Tim Nwachukwu/Getty Images/AFP

Joel Embiid scored 38 points and pulled down 12 rebounds and Tobias Harris added 18 points and 11 rebounds as the visiting Philadelphia 76ers took charge early and just enough to hold on for a 115-109 win over the San Antonio Spurs on Sunday.

The 76ers led by as many as 15 points late in the third quarter but could never put away San Antonio, which clawed back to within two points after a steal by Derrick White and a layup by Dejounte Murray with 33.2 seconds to play.

Embiid sank a pair of free throws with 14.9 seconds remaining, and Tyrese Maxey added two more to clinch the win.

Embiid, who added six assists, has racked up at least 30 points in 12 straight road games.

Maxey hit for 18 points and Furkan Korkmaz added 17 for the 76ers, who have won seven straight games against the Spurs dating to December 2018.

The first quarter featured six lead changes, the final one at the 3:48 mark when Georges Niang’s 3-pointer put the 76ers up 20-18.

An alley-oop dunk by Andre Drummond off an assist from Korkmaz with 1:18 to play in the period pushed Philadelphia’s advantage to 29-23, and that’s how the quarter ended.

The 76ers added to their lead in the second quarter, going up by as many as 13 on two occasions in the period. San Antonio pulled to within seven points on White’s 3-pointer with 34.5 seconds to play in the period before Korkmaz hit a trey and Charlie Brown Jr. a running dunk in the final 11.9 seconds to grant Philadelphia a 59-47 lead at the break.

Embiid led all scorers with 16 points at halftime while Harris added 10 points and eight rebounds for the 76ers. Poeltl paced San Antonio with 13 points in the half; the Spurs shot just 39.6 percent prior to halftime.

Balanced Wizards too much for 76ers, Joel Embiid