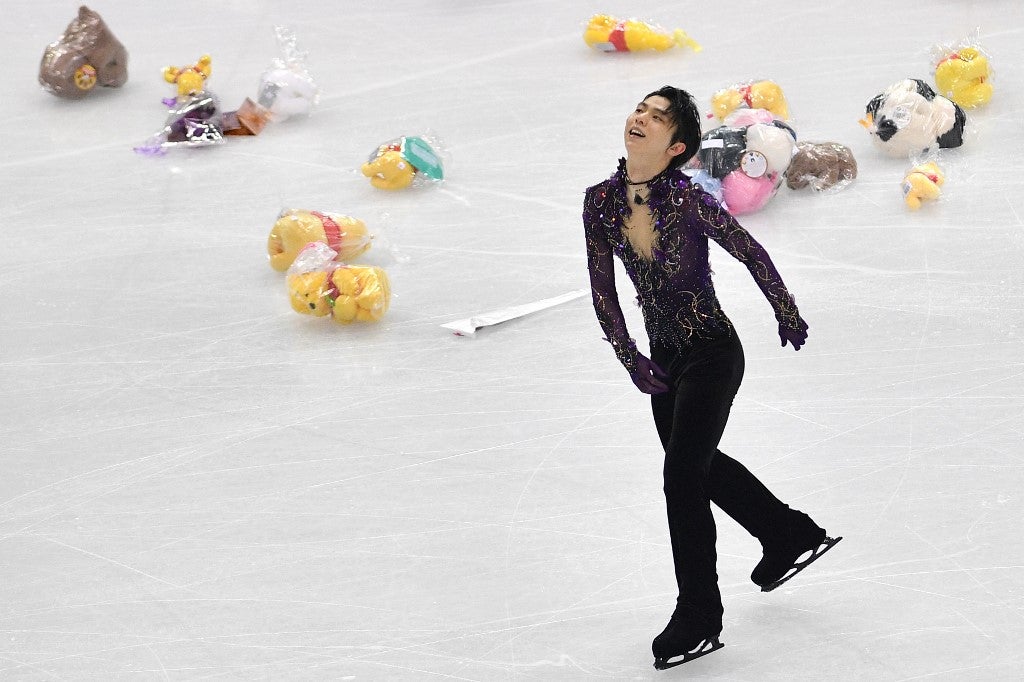 FILE–Japan’s Yuzuru Hanyu reacts after performing, as stuffed toys thrown by fans scatter the ice rink, during the Men Free Skating program on December 7, 2019 at the ISU Grand Prix of figure skating Final 2019 in Turin. (Photo by Marco Bertorello / AFP)

Few athletes inspire devotion quite like figure skater Yuzuru Hanyu, whose fans follow his every move, spend fortunes watching him compete and even carve sculptures of the Japanese star.

Hanyu, who is aiming to complete a hat-trick of Olympic titles at next month’s Beijing Winter Games, is worshipped as an icon by his adoring legion of “Fanyu” supporters.

They shower the ice with Winnie the Pooh toys after his performances and support him with a passion that even some Hanyu fans themselves find intimidating.

But they are united in their love for the boyish, rake-thin 27-year-old, who is known as “Yuzu” to his devotees.

“It’s as if he could disappear at any moment.”

Matsuo has made dozens of artworks of him, including a wooden sculpture that she says she carved “with a feeling similar to making a statue of Christ or Buddha”.

The general public will be locked out of the Beijing Games because of Covid-19, but Hanyu’s supporters will be glued to their screens from afar.

Many of his fans are middle-aged Japanese women, but he is also popular with a diverse range of people from around the world.

Mijeanne van der Merwe, a 26-year-old South African who lives in Germany, knew nothing about Hanyu or figure skating until she turned on the TV and watched him compete at the 2018 Pyeongchang Olympics.

“From the first note, I was hooked — the expression, the way he carried himself, the way he executed his program,” she says, adding that she burst into tears during the performance.

“Since then, I’ve been following him as closely as I can.” Fans of Japan’s Yuzuru Hanyu and Shoma Uno stand up during the victory ceremony for the men’s free skate during the 2021-22 Japan Figure Skating Championships at Saitama Super Arena in Saitama on December 26, 2021. (Photo by Philip FONG / AFP)

Matsuo, who also had no previous interest in skating, became a Hanyu fan after watching him win his first Olympic gold at the 2014 Sochi Games.

She says Hanyu has brought “light and color” into her life, and she wants her future grandchildren to see her artwork so they can learn about him.

But Matsuo has only seen her hero perform in exhibition shows, with tickets for competitions in Japan too hard to come by.

Demand is so great that tickets are sold through lotteries, and Matsuo says it is a “battle” to win them.

Those who succeed take part in rituals like throwing the Winnie the Pooh toys onto the ice after he performs, inspired by the tissue box cover he carries to the rink with him.

Matsuo says most Hanyu fans are “really nice people”, but she admits she has had problems with internet supporter groups in the past.

She describes “an atmosphere where people who had just joined couldn’t do things freely”, and others say the “Fanyu” world can be stifling at times.

“There are probably about a million fans in Japan, so I’m scared to be the one person from that group answering questions,” says one 64-year-old female Japanese fan, who did not wish to be named.

“Some people might go looking for the person who gave the interview, so it’s scary. Not everyone has the same opinion.”

‘Makes it look so easy’

She gets up in the middle of the night to watch his performances, chats with fellow fans from around the world, and spends money importing magazines and books from Japan.

“Obviously I have eyes and he is very pretty, but for me, he could have been the ugliest person in the world,” she says.

“It’s his dedication to his art, his sport — that was what caught me, the way he executes his program, the technical difficulty, the way he makes it look so easy.”

If Hanyu can win gold in Beijing, he will join 1920s star Gillis Grafstrom of Sweden as the only other man to win three Olympic singles titles.

But it will almost certainly be Hanyu’s last appearance on the Olympic stage, and retirement cannot be too far in the future.

Matsuo believes there is “no way” anyone like him will ever appear again.

“The way he looks and his technique and the effort he puts in — no one else will have that total package,” she says.

“I’m really happy that I’m alive at this time so that I can support him.”