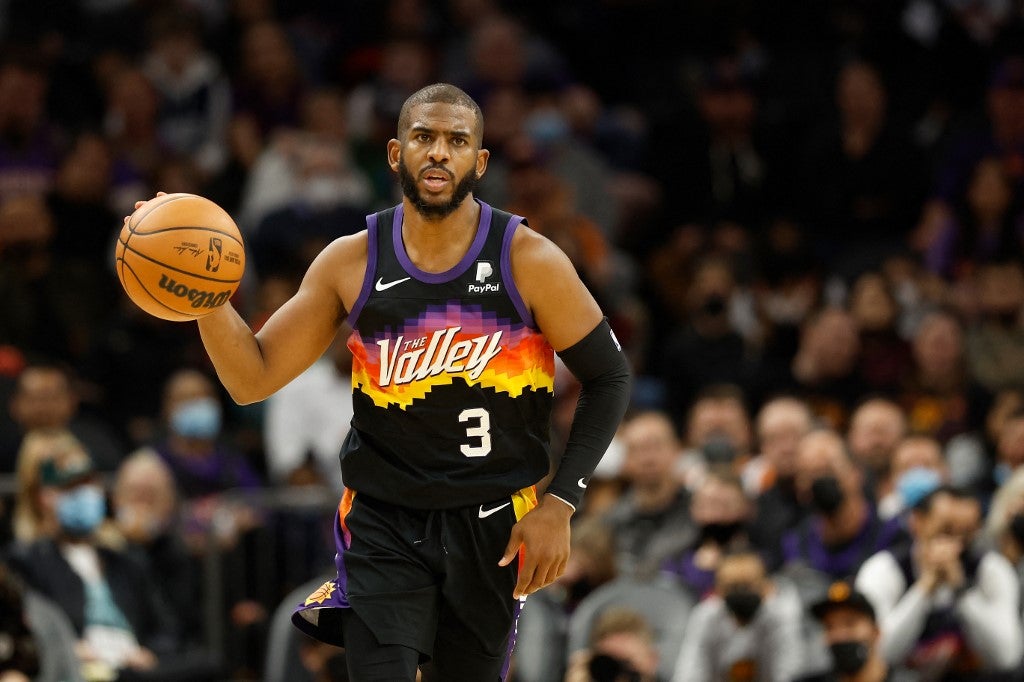 Chris Paul #3 of the Phoenix Suns handles the ball during the second half of the NBA game at Footprint Center on January 22, 2022 in Phoenix, Arizona. The Suns defeated the Pacers 113-103. Christian Petersen/Getty Images/AFP

Chris Paul collected 21 points, 14 assists and 10 rebounds as the Phoenix Suns held on to beat the visiting Minnesota Timberwolves 134-124 on Friday night for their ninth consecutive win.

Phoenix’s Devin Booker led all scorers with 29 points to go along with nine assists. Cameron Johnson contributed 23 points, hitting 5 of 9 attempts from beyond the 3-point arc.

Anthony Edwards recorded 27 points and 10 assists for Minnesota, which lost for the second time in as many nights. Karl-Anthony Towns finished with 23 points and nine boards, and Malik Beasley chipped in 26 points off the bench.

The Timberwolves, who trailed by 12 points late in the third quarter, closed within 112-108 after Edwards made a jump shot with 6:48 to play.

Minnesota cut the deficit down to 129-124 in the final minute but could not get any closer.

The Suns led 100-93 at the end of the third quarter. A 3-pointer by Phoenix’s Landry Shamet increased the advantage to 100-88 with 1:14 remaining in the period. However, Minnesota scored the final five points just before the buzzer on a three-point play by Jordan McLaughlin and a floating jump shot by Edwards after a Suns turnover.

A floating jump shot by McLaughlin evened the score at 66-66 with 2:07 left in the first half. Towns assisted on the shot, which came less than a minute after he assisted on a 3-pointer by Beasley.

After the Timberwolves pulled even, the Suns closed the half on an 8-0 run. Bridges initiated the surge with a 3-pointer, and CP3 capped it off with another 3-pointer followed by a pair of free throws.

The Suns led 40-32 at the end of the first quarter. Booker made a 3-pointer and Shamet contributed a trio of free throws during the final minute to push the lead to eight.