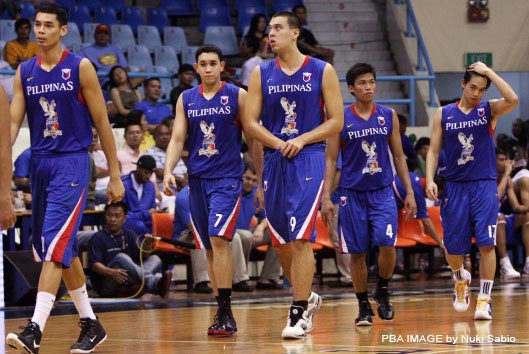 MANILA—Smart Gilas is going back to its original target of qualifying for the 2012 London Olympics after a breakthrough semifinal stint in the 22nd Fiba Asia Champions Cup.

Team manager Frankie Lim said the immediate goal is to lock up a slot in the Fiba Asia Championship in Wuhan, China, on Sept. 15 to 25 through the 9th Southeast Asian Basketball Men’s Championship in Jakarta two weeks from now.

The Nationals, who wound up fourth in the Champions Cup on Sunday after playing half-heartedly in their bronze-medal match against Qatar, face the Malaysians in their maiden game on June 23.

The Filipinos take on the Indonesians the next day and the Singaporeans on June 25 before the finals on the 26th, according to the schedule released by Seaba secretary general Dato Yeoh Choo Hock.

Just like the other national teams before them, Smart Gilas is a cinch to dominate the tournament where the top three finishers advance to the Asian championships.

“This (tournament) is important,” said Lim. “We’re the favorites but we cannot be complacent and think that we’re already assured of making it to Asian championships.”

Despite missing the bronze, Lim is convinced that Smart Gilas had met expectations in the Champions Cup, considered as the toughest club tournament in Asia.

“We had good games against Iran and Qatar and almost made it to the finals,” said Lim. “It was a good preparation for the team.”