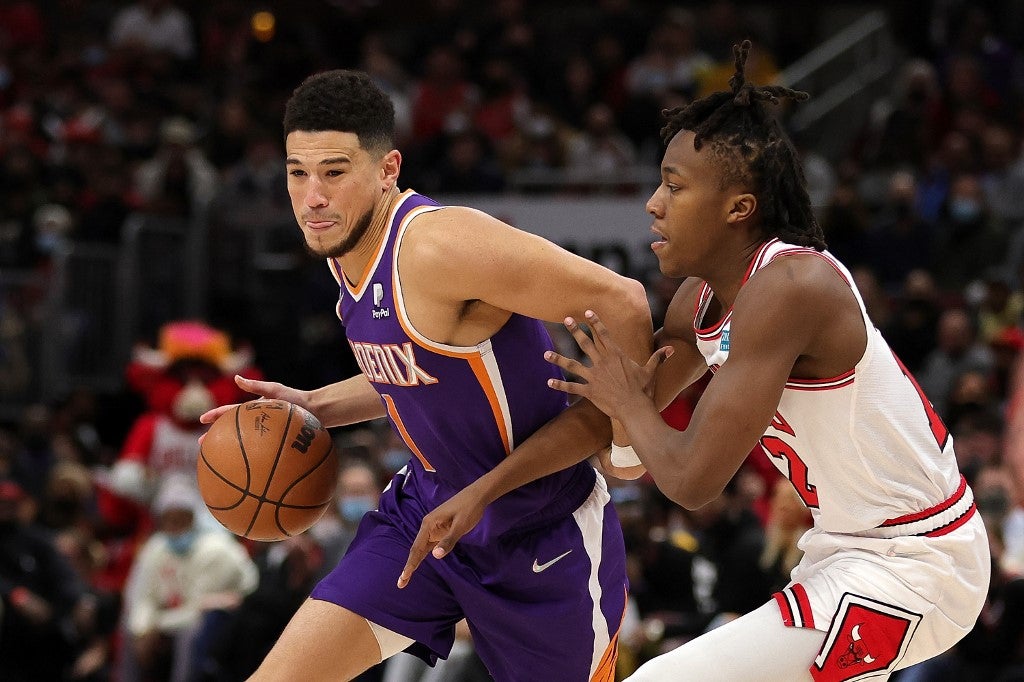 Devin Booker #1 of the Phoenix Suns drives around Ayo Dosunmu #12 of the Chicago Bulls during the second half of a game at United Center on February 07, 2022 in Chicago, Illinois. Stacy Revere/Getty Images/AFP

Devin Booker scored 38 points, Chris Paul and Jae Crowder each had double-doubles, and the visiting Phoenix Suns topped the Chicago Bulls 127-124 on Monday night for their 13th win in 14 games.

Booker went 14-for-23 from the field. He’s scored at least 30 points in five of his past eight games.

Start of Q4 on @NBATV pic.twitter.com/vuZ04kPmcw

Chicago lost for the second time in as many days while permitting 115-plus points for the seventh straight game. DeMar DeRozan converted a three-point play to cut the Suns’ advantage to nine with 5:56 to go, but Phoenix responded with five points in the next 40 seconds to regain control before the Bulls’ reserves made a late run.

DeRozan (38 points) and Zach LaVine (32 points) paced Chicago. It marked the third time the duo has scored at least 30 points in the same game this season.

This Euro-step by DeMar DeRozan 🔥

He's up to 38 points on @NBATV pic.twitter.com/8u7lljJ8qe

Coby White added 13 points for the Bulls, while Nikola Vucevic overcame a slow start to finish with 13 points and 12 rebounds, giving him 11 double-doubles in his past 15 games. LaVine also had eight assists and six rebounds, while Javonte Green grabbed eight boards.

Booker scored 22 first-half points on 8-for-10 shooting, including a 3-for-4 effort from 3-point range. Phoenix surged to a 67-49 lead at the break behind 56.5 percent accuracy from the field and savvy ball movement. The Suns had 16 assists against just four turnovers in the first 24 minutes.

LaVine (back spasms) and White (right adductor strain) each returned to the lineup for Chicago after missing the past two games.

Phoenix improved to an NBA-leading 21-5 on the road. The Suns are set to conclude a four-game trip Tuesday when they visit Philadelphia.

NBA: Suns bounce back from rare loss by routing Wizards