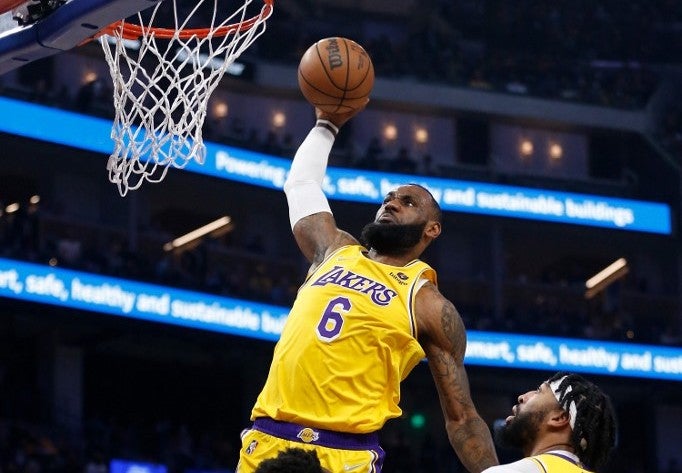 LeBron James #6 of the Los Angeles Lakers dunks the ball in the first half against the Golden State Warriors at Chase Center on February 12, 2022 in San Francisco, California. Lachlan Cunningham/Getty Images/AFP

James came into Saturday’s game against the Golden State Warriors needing 19 points to pass Abdul-Jabbar for most combined regular season and playoff points.

James drained a 3-pointer less than five minutes into the third quarter Saturday for his 21st point of the game and a total of 44,152 which vaulted him past Abdul-Jabbar.

James finished the game with 26 points but missed a key last-second free throw as the Lakers lost 117-115 to the Warriors.

He is fewer than 500 points from passing Karl Malone for number two on the regular season scoring list. He passed Michael Jordan for number one on the all-time playoff scoring list in 2017.

James also has scored 25 points or more in 22 straight games, which is the longest such streak of his career.