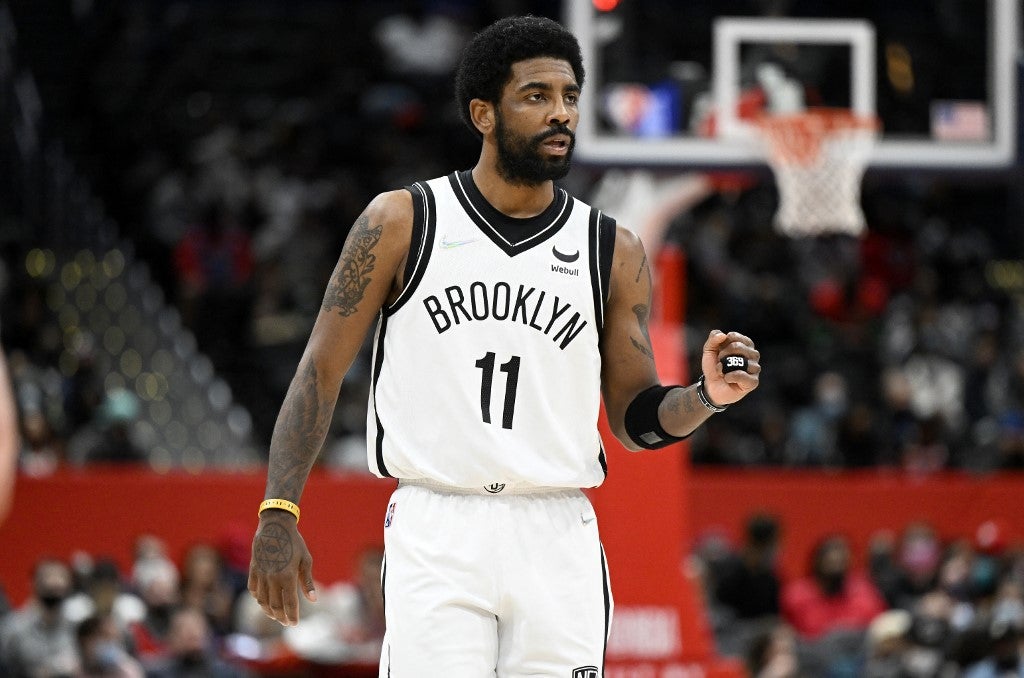 Kyrie Irving #11 of the Brooklyn Nets gestures during the second quarter against the Washington Wizards at Capital One Arena on February 10, 2022 in Washington, DC. Greg Fiume/Getty Images/AFP

Kyrie Irving said he feels “no guilt” over not being vaccinated — a decision that’s led to his part-time player status — amid an 11-game losing streak for his Brooklyn Nets.

With Kevin Durant out with a knee injury and James Harden traded, Irving was the last of the Nets’ big three standing Saturday night when Brooklyn lost to the Eastern Conference-leading Heat in Miami, 115-111. The Nets have fallen to 29-27 and to eighth place in the conference.

New York City rules that require vaccination against COVID-19 are keeping Irving from playing in home games in Brooklyn.

“There’s no guilt that I feel,” Irving told reporters after scoring a game-high 29 points on Saturday. “I’m the only player that has to deal with this in New York City because I play there. If I was anywhere else in another city then it probably wouldn’t be the same circumstances. But because I’m there, we have (mayor) Eric Adams, we have the New York mandate, we have things going on that are real-life circumstances that are not just affecting me, bro. So you ask me these questions, I don’t feel guilt.”

Nets coach Steve Nash said Saturday that Durant is working his way back from a sprained left MCL, which has kept him out since Feb. 15, but there is no timetable for his return. And it’s unclear when Ben Simmons — the centerpiece of the Harden trade to Philadelphia — will be in game shape after sitting out the season in a dispute with the 76ers. Kyrie Irving #11 of the Brooklyn Nets cheers on his team in the first quarter against the Washington Wizards at Capital One Arena on February 10, 2022 in Washington, DC. Greg Fiume/Getty Images/AFP

The Nets have six games remaining in February, and Irving is eligible to play in just one — Feb. 26 at Milwaukee.

In his postgame comments, Irving said he had received assurances from the league and players association about his ability to play but those assurances have gone unfilled.

“I’m just living my life as best I can just like everybody else that missed these last two years,” Irving said. “I didn’t have a plan in place while all this was going on, didn’t know. The NBA and the NBPA made it very clear that there would be things that I would be able to do to work around this. And that’s off the table. So you tell me if I’m just alone out here or do I have support from everybody else that’s dealing with the same thing?”