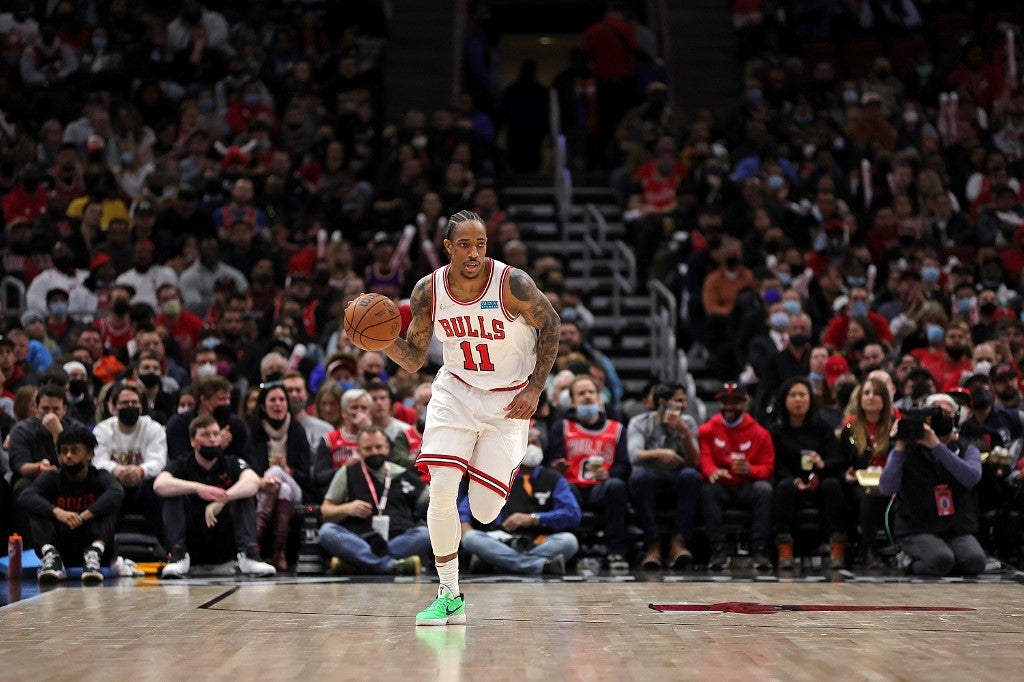 DeMar DeRozan #11 of the Chicago Bulls handles the ball during a game against the Phoenix Suns at United Center on February 07, 2022 in Chicago, Illinois. Stacy Revere/Getty Images/AFP

DeMar DeRozan poured in 40 points and continued his historic scoring run as the Chicago Bulls outlasted the visiting San Antonio Spurs 120-109 on Monday to win their fourth straight game.

The Bulls trailed by six points entering the fourth quarter but then DeRozan took charge, scoring 11 of Chicago’s next 13 points to give the Bulls the lead. The Bulls never trailed again, as DeRozan and Nikola Vucevic dominated the stretch.

San Antonio had two huge turnovers on successive possessions down by four points in the final 1:53 to hamper its comeback attempt.

DeRozan has scored 30 or more points in seven consecutive games (improving on a career-high) and established a franchise record with his sixth straight game of at least 35 points, supplanting the mark set by Michael Jordan in the 1996-97 campaign.

🔥 38 for DeMar DeRozan 🔥@chicagobulls up 5 late on NBA TV! pic.twitter.com/0yViPRFovu

Vucevic added 25 points and 16 rebounds in the win, with Coby White scoring 24 points and Ayo Dosunmu hitting for 12. Chicago got just 12 points from its bench but shot 52.3 percent from the floor and earned a 58-41 edge on the boards.

The Bulls led 29-27 after a back-and-forth first period as Vucevic (12 points) and White (11) combined for all but six of Chicago’s points.

San Antonio swept to the front at 34-29 by scoring the first five points of the second period, after which there were nine lead changes and five tied scores before DeRozan’s two free throws with 48.1 seconds left in the quarter gave the Bulls a 59-57 advantage at the break.

White led all scorers with 16 points in the half with DeRozan and Vucevic adding 15 each for Chicago over the first 24 minutes of play. McDermott paced the Spurs with 14 points while Walker IV had 11 and Murray scored 10 for San Antonio.

The Spurs retook the lead with a 9-2 run in the middle of the third quarter. Chicago tied the game at 79 on a jumper by DeRozan with 4:26 to play and again on a hook shot by Vucevic on its ensuing possession but San Antonio rode nine points by Walker IV and a layup and a dunk by Keita Bates-Diop to end the period up 89-83.