Alaska wants a title to cap its 35-year PBA stint

A team that won with integrity and lost with honor
By: Denison Rey A. Dalupang, Musong R. Castillo - @inquirerdotnet
Philippine Daily Inquirer / 05:20 AM February 17, 2022 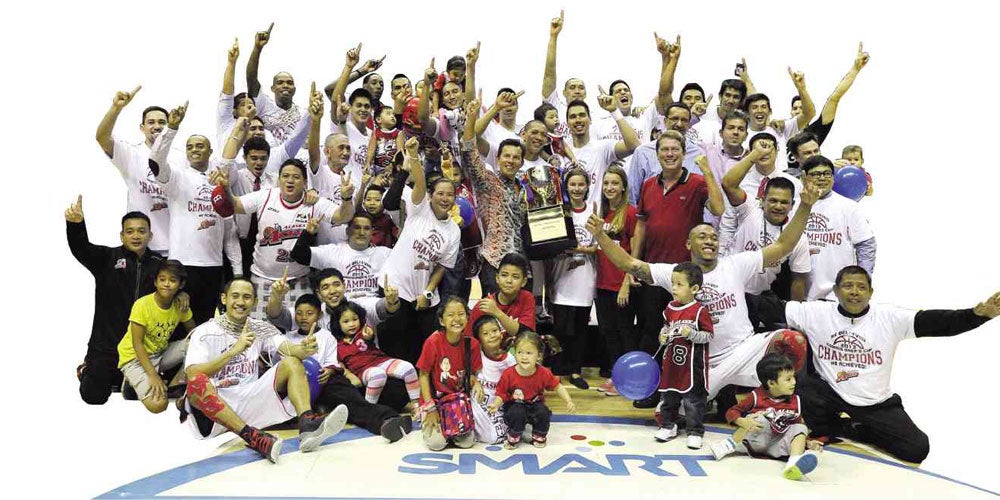 As it ends a storied stint in the league, Alaska is hoping that the 2013 title it won won’t be the last for the franchise. (Photo by AUGUST DELA CRUZ)

Using walls adorned by Alaska’s accomplishments in the Philippine Basketball Association (PBA) as a backdrop during a video conference, Wilfred Uytengsu was emotional in announcing late Wednesday morning that the ongoing Governors’ Cup will be the franchise’s last conference in the league.

Count the milestones the franchise will leave in its wake: Thirty-five years of participation, 14 championships in 31 Finals appearances, a rare Grand Slam completed in 1996 when parity in the league was at its highest, and of course, playing with honor and integrity all throughout its PBA existence.

That is Alaska’s legacy, one that cannot be carried over as the team tries to find a suitable buyer for its franchise before June so that the coaches, players and staff can be acquired lock, stock and barrel; otherwise Aces go into a dispersal draft.

And in true Alaska fashion, the team is not about to go into the sunset quietly.

“As I told the team today, we still have one more conference to get our 15th ring,” Uytengsu said. “I am not throwing in the towel yet. I don’t know if we will have that many fans watching the Finals, but I hope Alaska is there.”

Import Ola Ashaolu summed up on social media what the team’s rallying cry will be: “Last Dance.”

The development comes as a shock to this basketball-crazed nation, but it was one Uytengsu said he knew was coming sooner than later after he sold the family company to Royal FrieslandCampina back in 2019 while he stayed on as chair and maintained control of the team that entered the league in 1986.

“Once we sold the company, I knew at some point this would be an eventuality. And it’s just come to a situation where the [new parent] company wants to refocus its efforts,” Uytengsu said. “It was a really, really hard decision.”

For all that the franchise has achieved, it did not start out on a bed of roses story as, back in the day, there were seasons where Alaska would be the league’s favorite whipping boys.

And that drove the basketball-enamored Uytengsu nuts in building a competitive team from the ground up—doing so with all transparency that led to some of his famous declarations: “We will lose with honor and win with integrity.”

He reaped his fruits when a crew built around the likes of Johnny Abarrientos and Jojo Lastimosa and coached by the legendary Tim Cone completed that Triple Crown sweep—just the fourth in the league at that time—which forever etched the then-Milkmen as one of the greatest teams of all time.

Uytengsu has always looked at results. And he rewarded them, too. His team was the first in the league to hand out championship rings to its members and showered that 1996 team—from the coaches down to the last player on the bench—with a then-unheard of bonus: brand-new Honda Civics.

“I’m extremely proud of my time (23 years) with Alaska where I made many lifetime friends amongst the players and staff,” Cone told the Inquirer. “My coaching career grew under the stewardship and friendship of Mr. Uytengsu, and I’m grateful for his mentoring. I am who I am as a coach and as a person because of that.”

“Going forward now without Alaska in the league will seem unnatural, and I believe it will mark a time of great transition for the PBA,” said Cone. “It’s an end of an era.”

“I just hope everyone comes together to talk and think of the league first, and that the league continues to be successful,” he said. “I think in order for the league to continue to be healthy, you’ll need to see a level playing field. I think that is important.

“I hope we’ve done everything we can do as a franchise, as an independent team to set the example.”

Alaska’s last title came in the 2013 Commissioner’s Cup, and it has been a dry spell ever since.

But that doesn’t mean that the Aces have stopped contending. And one of the losses that followed was the bitterest pill to swallow; in 2015, Alaska bungled a 3-0 series lead in the race-to-four Philippine Cup Finals to yield the title to San Miguel Beer. That touched off a dominant streak in the conference by the Beermen.

PBA commissioner Willie Marcial has begged off from commenting heavily at the moment in deference to the breadth of Alaska’s history and contributions to the league.

But Marcial did say: “I admit I was saddened by their departure, but I thanked Mr. Fred Uytengsu for all the advice he’s always given me.”

The league boss called for an emergency board meeting to discuss the disbandment, Marcial rightfully said: “Alaska deserves all our attention today.”

From entering the basketball public’s consciousness via that cute TV commercial in 1974 of a wide-eyed, pint-sized boy playing against import Cisco Oliver with the tagline “Wala pa ring tatalo sa Alaska,” the company built a team that has gone on to enjoy a truly fine ride very few squads in the league have experienced.

Uytengsu’s vision, and the hard work that all the coaches, players, and utility personnel who has ever represented the team put in made sure that very few teams could beat Alaska’s success.

So when a true-blue PBA fan now talks of the exploits of the greatest teams of all, it won’t only be Crispa or Toyota that will be worth mentioning.

Alaska will be in the conversation, not only for the titles it won but for how the team played the game — with honor in times of defeat and with integrity every victorious turn.