LONDON – Moscovite Daniil Medvedev reached the pinnacle of men’s tennis when he became the ATP’s world number one on Monday but what should have been a day of pride for Russian sport has been engulfed by the country’s invasion of Ukraine.

Medvedev is only the third Russian man to top the standings and the first player outside the so-called “big four” of Novak Djokovic, Roger Federer, Rafael Nadal and Andy Murray to hold the top spot in 18 years.

But with the sporting world uniting its in condemnation of Russia’s invasion of Ukraine, Medvedev’s meteoric rise to the top could hardly have happened at a worse time for tennis.

On Sunday the Ukrainian Tennis Federation urged the sport’s governing body the International Tennis Federation (ITF) to immediately expel Russia and Belarus from the organization and ban Russia from team and individual tournaments.

In a letter seen by Reuters, the Ukrainian federation described the actions of Russia and Belarus in Ukraine over the past four days as “unprecedented, cynical and bloody”.

“Civilians are dying, including women and children; civilian infrastructure is collapsing … This is a full-scale war that will push our country back decades,” the letter said, adding that the goal of Russia’s invasion was “extermination.”

“Russia and Belarus do not have the right not only to hold international competitions on their territory, but also to participate in all ITF team and individual tournaments abroad,” the letter continued.

In response, the ITF said it had taken “swift action” to cancel all events in Russia indefinitely and that no ITF events would be held in Belarus for 2022.

“This is a fast-evolving situation; we are in active discussion with the ITF tennis family and the ITF Board to decide and align around our next course of action,” it said.

“We stand united with the Ukraine and are working with the Ukraine Tennis Federation. Right now, our priority is the safety of the tennis players and the security of all those participating in our events.”

Any restrictions on individual Russian players, while seen as unlikely, would cast doubt on Medvedev’s participation at the next Grand Slam, the French Open in May.

Ahead of his coronation as world number one Medvedev took to Twitter on Sunday with a plea for peace.

“Today I want to speak on behalf of every kid in the world,” he said. “They all have dreams, their lives are just starting, so many nice experiences to come…

“That’s why I want to ask for peace in the world, for peace between countries. Kids are born with inner trust in the world, they believe so much in everything, in people, in love, in safety, in justice, in their chances in life.

“Let’s be together and show them that’s it true, because every kid shouldn’t stop dreaming.” 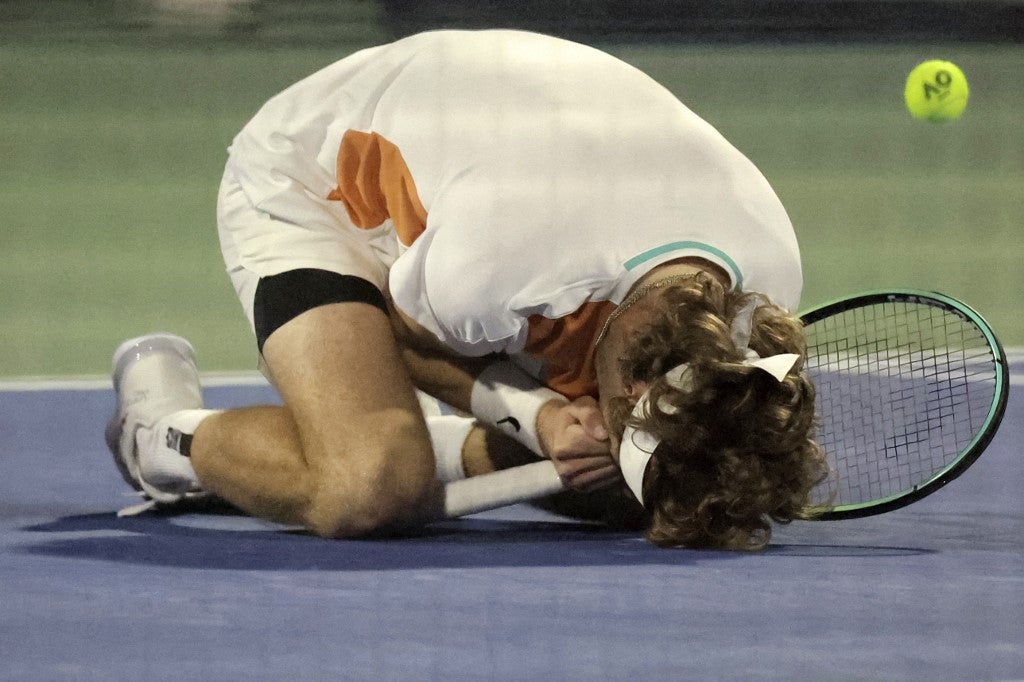 Andrey Rublev of Russia reacts after winning the final match of the ATP Dubai Duty Free Tennis Championship in the Gulf emirate on February 26, 2022. (Photo by Karim SAHIB / AFP)

Medvedev’s fellow Russian Andry Rublev, the world number seven, wrote “No War Please” on the lens of a TV camera on his way to winning the Dubai title last week.

Russia calls its actions in Ukraine a “special operation” that it says is not designed to occupy territory but to destroy its southern neighbor’s military capabilities and capture what it regards as dangerous nationalists.