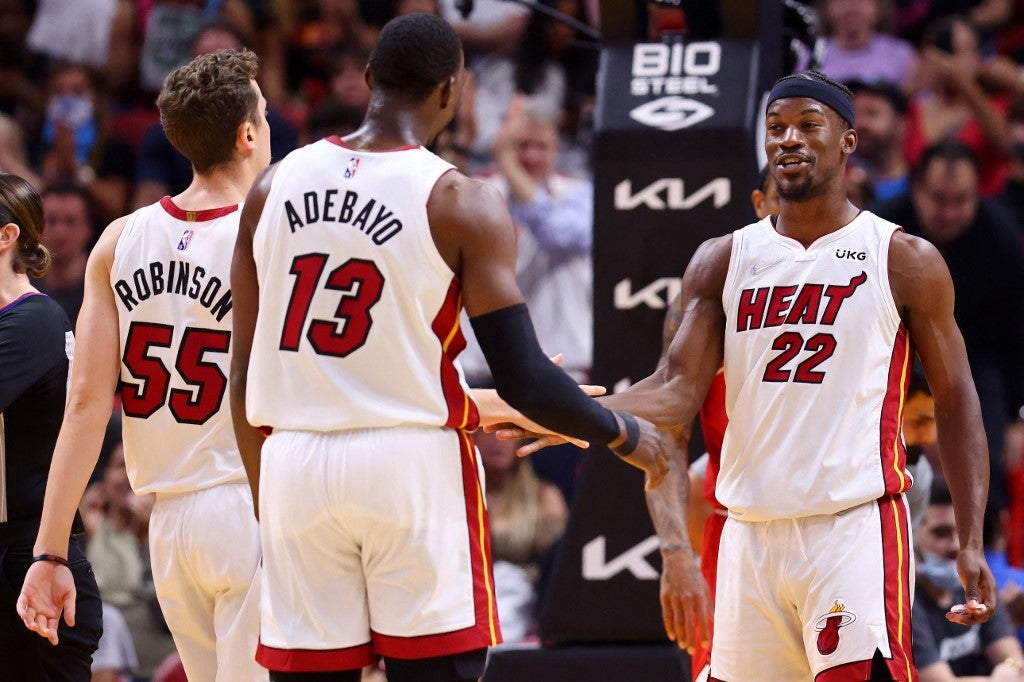 Jimmy Butler #22 of the Miami Heat celebrates with Bam Adebayo #13 against the Chicago Bulls during the second half at FTX Arena on February 28, 2022 in Miami, Florida. Michael Reaves/Getty Images/AFP

Tyler Herro and Jimmy Butler scored 21 points each as the host Miami Heat cooled off the Philadelphia 76ers, 99-82, on Saturday night.

Buckets returned and gave us what we needed ☕️ pic.twitter.com/PTa05Xwsub

Embiid, who was forced into a team-high four turnovers for the game, had just six points in the first half on 2-for-10 shooting.

The Sixers, who played without star guard James Harden (left hamstring injury), had their five-game win streak snapped. The Sixers had averaged 125.8 points during their streak.

For Miami, starting point guard Kyle Lowry missed another game due to person reasons. He has missed 12 of the past 21 games.

The Heat improved to 22-7 at home. They are 11-2 in their past 13 games overall, and they have beaten the Sixers twice in three tries.

Okay so how many more people do we have to convince? #6MOTYLER pic.twitter.com/gsoQfLa7Oq

Philadelphia started poorly with its lowest scoring first quarter of the season. The Sixers shot just 21.7 percent and trailed by as many as 11 points. By the end of the quarter, the Heat led 22-14.

Butler had 10 first-quarter points, nearly matching the Sixers on his own, and Embiid shot just 2-for-9.

Miami stretched its second-quarter lead to 20 points before settling for a 54-40 advantage at halftime. Herro led all scorers with 13 points, making 5-of-6 shots. Miami shot 61.1 percent in the second quarter.

In the third quarter, Embiid scored 12 points as the Sixers cut their deficit to 70-68 with 7.2 seconds left. But the last play of the quarter — a Gabe Vincent 3-pointer — gave Miami a 73-68 advantage.

Miami never relinquished its lead in the fourth quarter.

Herro set a franchise record with his sixth straight 20-plus-points performance off the bench.