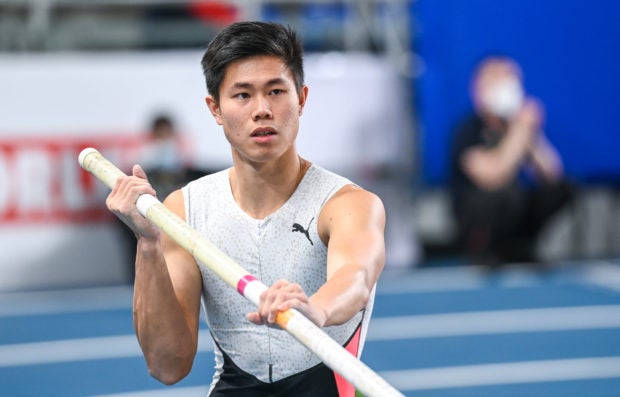 Ernest John Obiena continues to build his case for the coming 2022 IAAF (International Amateur Athletic Federation) World Indoor Championships and the 31st Southeast Asian (SEA) Games, proving himself worthy of inclusion to the national team despite his burdening split with the Philippine Athletics Track and Field Association (Patafa).

The world’s No. 5 pole vaulter recently cleared a season-best 5.91 meters for a silver medal that reset his own national indoor record at the Perche Elite Tour in Rouen, France.

It was .01m short of erasing the 24-year-old existing Asian indoor record in men’s pole vault owned by Kazakhstan’s Igor Potapovich, who jumped 5.92m in a meet held in Stockholm, Sweden, early 1998.

The mark eclipsed Obiena’s victories in the Orlen Cup and Orlen Copernicus Cup in Poland, where he jumped 5.8m both times, which made him eligible to the world indoor championships.

The Patafa has stood pat on its decision to freeze Obiena, more so after the agency got the blessing of World Athletics.