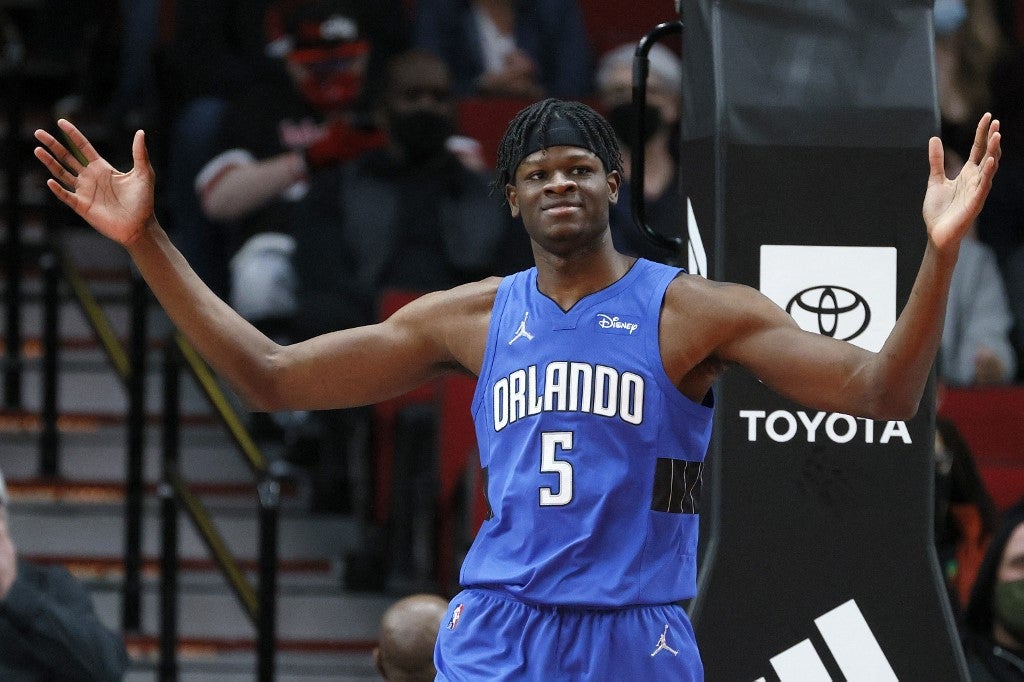 Mo Bamba #5 of the Orlando Magic reacts during the first quarter against the Portland Trail Blazers at Moda Center on February 08, 2022 in Portland, Oregon. Steph Chambers/Getty Images/AFP

Mo Bamba hit a go-ahead 3-pointer with 52.2 seconds left and the host Orlando Magic handed the Golden State Warriors their third straight loss with a 94-90 comeback victory on Tuesday night.

Franz Wagner hit three free throws with 13.2 seconds remaining — following the Warriors’ unsuccessful coach’s challenge for a shooting foul — for a 92-88 lead for the Magic. The rookie out of Michigan added a dunk off an inbounds play moments later to complete the scoring. Wagner ended the game with 18 points on the night.

Wendell Carter Jr. finished with 19 points and eight rebounds for the Magic, which won its second straight. Bamba had seven points, seven boards and three assists. His timely 3-pointer was just his second made-basket from the floor in 23 minutes of action.

For the Warriors, Jordan Poole scored 12 of his game-high 26 points in the third quarter to go with six assists and Otto Porter Jr. contributed 14 points and 15 rebounds off the bench as Golden State opened a five-game road trip.

Klay Thompson made a pair of 3-pointers and scored 15 points for the Warriors, who were playing their second game since star guard Stephen Curry sprained his left foot.

Jonathan Kuminga had a strong game off the bench with 14 points on 6-for-8 shooting. Andrew Wiggins, who scored 28 points in the first meeting between the teams on Dec. 6, had 13 points (5-for-19 shooting) and eight rebounds.

The Warriors, who trailed by as many as 13 points in the first quarter, outscored Orlando 36-19 in the third period on the strength of a 7-for-11 performance behind the arc. Golden State ended the quarter on a 22-13 run to take a 74-65 lead into the final 12 minutes.

Orlando jumped out to a 13-point lead before settling for a 25-17 advantage after the first quarter as Anthony made three triples and Wagner scored eight points.

Orlando rookie Jalen Suggs (ankle) missed his fourth straight game, while the Magic also announced on Tuesday that forward Jonathan Isaac underwent a small surgical procedure after suffering a right hamstring injury. Isaac was already set to miss the entire 2021-22 season as he recovers from a torn left ACL