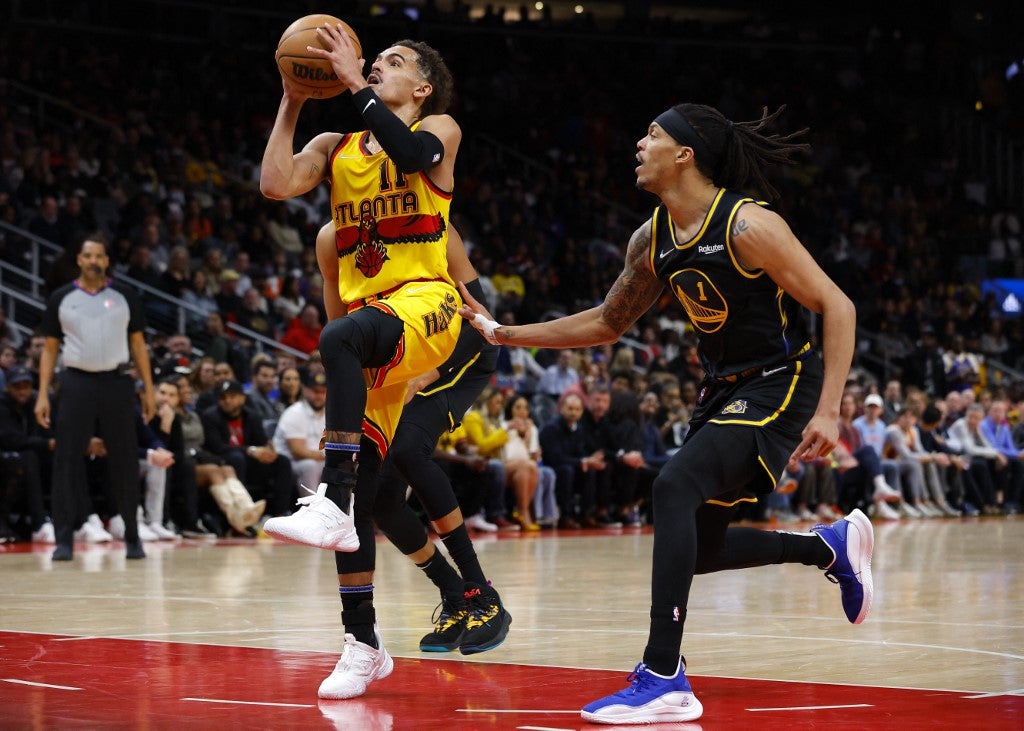 Trae Young #11 of the Atlanta Hawks goes up for a shot as Damion Lee #1 of the Golden State Warriors defends during the second half at State Farm Arena on March 25, 2022 in Atlanta, Georgia. Todd Kirkland/Getty Images/AFP

Trae Young scored 33 points and dished out 15 assists to help the Atlanta Hawks erase an 11-point deficit and defeat the visiting Golden State Warriors 121-110 on Friday.

Young shot 12-for-20 from the field, including 4-for-9 from 3-point range, and finished with his 37th double-double of the season. Young, 23, knocked down his 700th career 3-pointer, making him the youngest player to reach that milestone.

The Hawks (37-37) earned a split of the regular-season series with the Warriors while winning for the sixth time in nine games. Golden State (48-26) fell for the fourth in five games.

Atlanta led by 18 to start the fourth quarter, but Golden State whittled the deficit to three on a dunk by Kevon Looney with 4:27 left. The Warriors were unable to get closer, and back-to-back 3-pointers by Kevin Huerter and Young in the final two minutes put the game away.

Huerter left the game in the first quarter due to left shoulder pain but returned to finish with 20 points. Danilo Gallinari scored 25 before leaving with three minutes left because of a right elbow contusion, and Clint Capela had 19 points and 13 rebounds.

Golden State’s Klay Thompson responded from taking Wednesday’s game off for injury management by scoring 37 points, one shy of his season high. Jordan Poole scored 24, but only two in the second half. Poole added 10 assists.

Golden State led 42-36 after the first quarter, with the visitors making seven 3-pointers and shooting 62.5 percent from the field. The Warriors stretched the lead to 50-39 and had a nine-point lead with 2:13 left in the half before Atlanta scored the final 11 points to take a 69-67 edge into the break.

Young put up 15 points in the third quarter and Atlanta outscored Golden State 32-16 to hold a 101-83 lead after the period. The Warriors outscored the Hawks 19-6 to start the fourth quarter, pulling within five points with 5:37 left.

Golden State continues its five-game road trip on Sunday with a game at Washington. Atlanta begins a two-game road swing on Monday at Indiana.