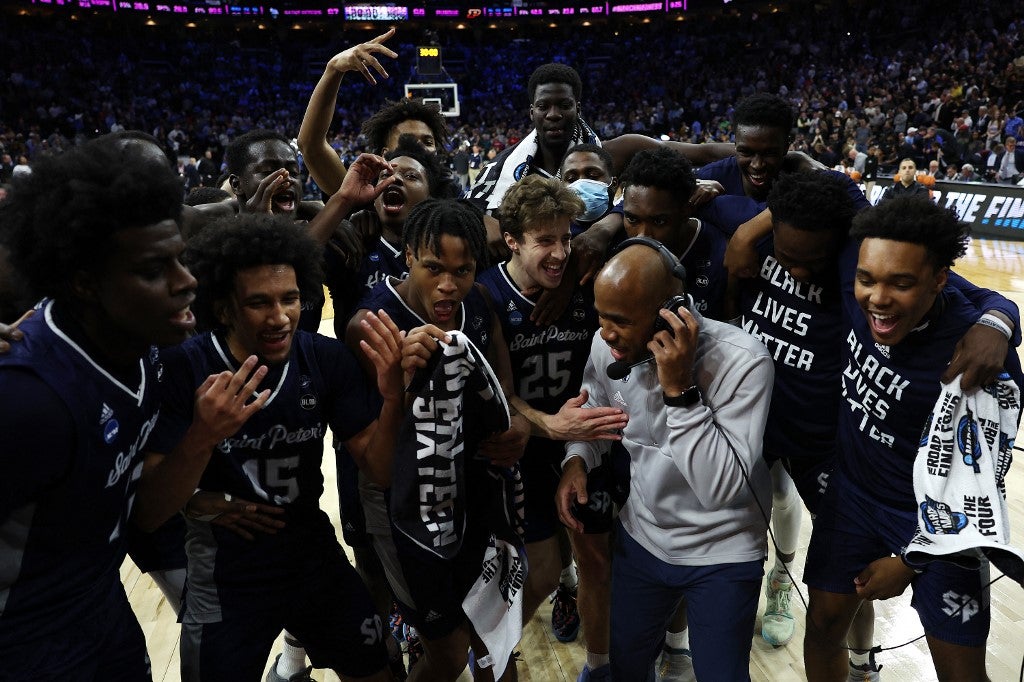 Daryl Banks III hit critical late-game baskets on his way to 14 points, and the Peacocks took down third-seeded Purdue 67-64 in an East Region Sweet 16 game Friday in Philadelphia to become the first team in NCAA Tournament history to make the Elite Eight as a No. 15 seed.

Cinderella's not ready to leave the Dance 🕺#MarchMadness @PeacocksMBB pic.twitter.com/4W7n8MhGQR

Saint Peter’s (22-11) overcame Purdue star Trevion Williams’ 16 points and eight rebounds. The Peacocks once again applied their aggressive defense and forced 15 turnovers before outshooting the Boilermakers (29-8) down the stretch.

“When you play against teams like that who’s ‘supposed’ to win, right, when you keep it tight, certain things can happen,” Peacocks coach Shaheen Holloway said. “We kept battling. I knew the ball was going to bounce our way, and it did.”

Saint Peter’s next will face No. 8 North Carolina, which defeated No. 4 UCLA later on Friday night.

Williams scored a quick five points for a 56-52 Purdue lead, but Doug Edert’s three free throws cut the margin to one with 4:02 left and Banks tied the game at 57 with a jumper for Saint Peter’s.

Purdue’s ensuing shot to beat the shot clock missed the rim. Banks made it 59-57 with a floating layup, and Williams was crowded inside to force a missed shot.

Free throws brought it to 63-59 before Mason Gillis’ putback of a missed trey trimmed it back to two with 25.8 seconds left. Banks made two more foul shots, and Jaden Ivey responded for Purdue with a 3-pointer with eight seconds to play.

But Edert, one of the faces of Saint Peter’s tourney run, made the game-clinching free throws with 4.1 seconds left. He finished with 10 points and garnered the love of the heavily pro-Saint Peter’s crowd.

“We’re happy, but don’t mistake it, we’re not satisfied,” Edert said. “Like (teammate) KC Ndefo always says, the job’s not finished. We feel like we belong and the more games we win, the more confidence we build.”

Philadelphia native Clarence Rupert scored all 11 of his points in the first half for Saint Peter’s. Zach Edey and Sasha Stefanovic posted 11 points apiece for Purdue, Gillis chipped in 10 and Ivey added nine to go with eight rebounds.

Edert tied the game at 17 when he knocked down a 3-pointer, his only basket of the half. A minute later, Jaylen Murray grabbed a steal and was fouled on the fast break, with his resulting free throws pushing the Peacocks ahead. Stefanovic guided Purdue back with two open 3-pointers.

The Boilermakers took the lead 33-27 on a 6-0 run completed when Stefanovic made a nimble cut and caught Williams’ feed for a layup. But Murray got a layup to fall at the buzzer to bring Saint Peter’s within 33-29 at halftime.

Saint Peter’s opened the second half with an 8-0 run to regain the lead while holding Purdue scoreless for the first 5:47. The stretch included a Purdue shot-clock violation induced by stifling defense.

Purdue coach Matt Painter used a timeout to reset. The Boilermakers returned and scored the next eight points, with three straight buckets by Williams.

The 6-foot-10 Williams scored 14 of his 16 points in the second half, making it appear he’d be the force to help Purdue pull away. Saint Peter’s moved to a zone look during the last five minutes, and Painter said his team didn’t knock down enough shots.

“I don’t want to take anything away from Saint Peter’s or Coach Holloway,” Painter said. “He did a fabulous job like he’s done all tournament.”