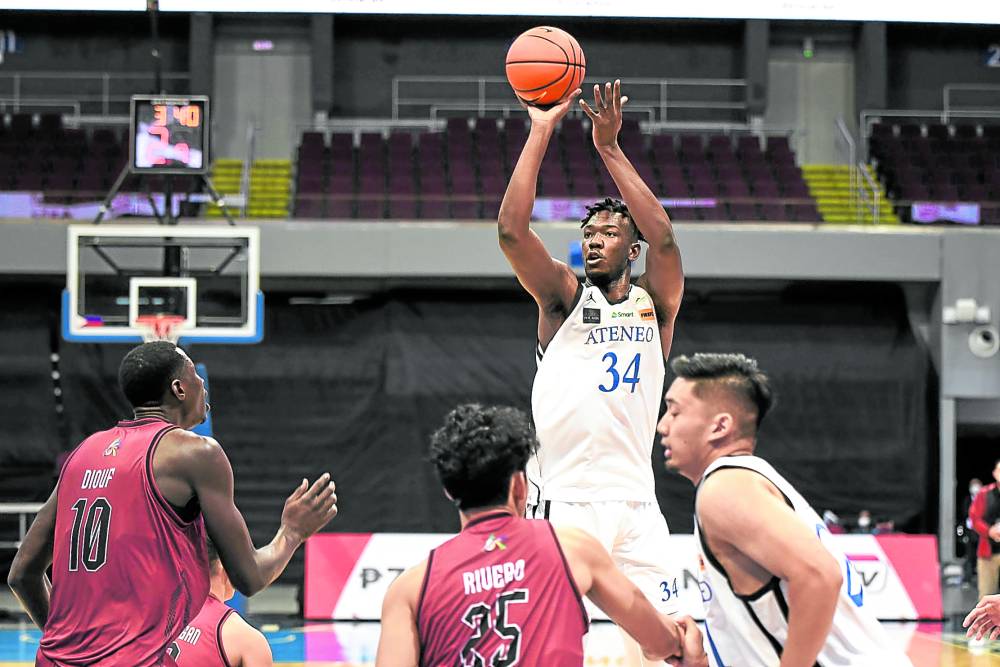 Ateneo needed just a short time to dismantle a University of the Philippines (UP) team that painstakingly built a championship contender for this season.

Now, it’s a matter of cleaning up that finishing kick.

The defending champions got off to a strong start, drew a strong performance from a homecoming star and then fended off a late fightback from the Maroons to hammer out a 90-81 victory at the start of the University Athletic Association of the Philippines (UAAP) men’s basketball tournament on Saturday at Mall of Asia Arena.

“Obviously we’re delighted to get a win in that thing,” said Ateneo coach Tab Baldwin. “We went into [the game] not knowing how we would perform, how UP would perform.”

But in what would become the theme for the opening-day winners—from Far Eastern U’s (FEU) demolition of University of Santo Tomas (UST) to National U’s (NU) squeaker over Adamson—Baldwin admitted the Eagles need a lot of work to shed off the rust brought about by the league’s two-year, pandemic-imposed hiatus.

“The performance needs a lot of improvement but every team will feel that way probably in the first week,” Baldwin said. “Overall I thought sloppy both ends of the floor—which isn’t a big surprise—but the effort will always be there.

“It’s almost like you have to outlast your opponent.”

Even FEU, which was hardly ever threatened in its game against a UST team trying to reassemble the pieces of a nuked program, felt like it has to tinker with a lot of aspects of its game after its 76-51 rout of the Tigers.

Rookie RJ Abarrientos drained three triples and had an assist in a brief run in the second quarter that gave the Tamaraws a 43-15 spread with 3:15 remaining in the half to effectively take the Tigers out of the game—and exposed UST’s patch-up program as a noncontender this season.

“I was really excited to play [in the UAAP] after two years,” said Abarrientos. “Our preparations that we did the last months, we bonded really well as a team and this was the result of our training.”

Both teams showed the rust gathered after being away from competition for two years because of the COVID-19 pandemic and the health lockdowns enforced by the government. FEU turned the ball over twice before making the season’s first field goal. UST had three errors before putting points on the board.

But as FEU warmed up, the offense froze for Santo Tomas, which seemed to treat the first half as a glorified three-point shooting practice session—missing a lot of shots in the process. FEU stormed to a 22-9 lead entering the second period. UST took 22 attempts from beyond the arc in the first half and made just four as the Tigers looked every inch a team that left its fight in Sorsogon, where they pawned off their future in an ill-advised training camp in 2020, held against the lockdown protocols.

National U also had issues with its victory, blowing a 14-point lead in the third period but squeezing out enough in the stretch to hold off stubborn Adamson, 71-69.

NU looked headed for a cruise behind a seemingly indefatigable pressure defense but wound up needing some tenacious work off the offensive glass and two misses from the stripe from Adamson’s Tricky Peromingan with nine-tenths of a second remaining before sealing the victory.

“Actually, although we won the game, [in] the fourth quarter, we struggled with poor execution,” said NU coach Jeff Napa. “This is a young team and we need to address that.”

Ateneo also struggled with hurried shots and unnecessary fouls in the fourth period, but had enough of a buffer as it took a 20-point lead there.

And as the Maroons rallied behind CJ Cansino, the former UST skipper, Ricci Rivero and Malick Diouf, the Eagles found timely hits from Tyler Tio and SJ Belangel to quell the rally.

“We had a big lead in fourth but we started to give that away by doing unintelligent plays … and committing silly fouls,” Baldwin said. “Offensively we became stagnant and shot the ball early in possessions when we didn’t have good shots.”

“We need to respond better. We allowed them to shave off more from that lead than we should. Tyler hit a big three, SJ hit a big three and that alleviated the pressure, but we should play smarter so we don’t have to face that pressure.”

Dave Ildefonso, the former Ateneo high school star who flew back to the Eagles’ nest after a stint with a rival school, assembled scoring bunches when needed as the defending champions got off to a rousing start.

“Just being under coach Tab [Baldwin] during that duration of time with Gilas just helped me understand his system a lot more,” said Ildefonso, who finished with 19 points on 7-of-14 shooting.

Raffy Verano added 18 points and five rebounds for the Eagles.

Ateneo used an 11-0 run to claim a 13-3 lead at the 3:03 mark of the first quarter. Ange Kouame drained a triple and a short jumper in that run. Ildefonso also knocked down a triple and added two free throws as the defending champs stretched the lead to 20-5.