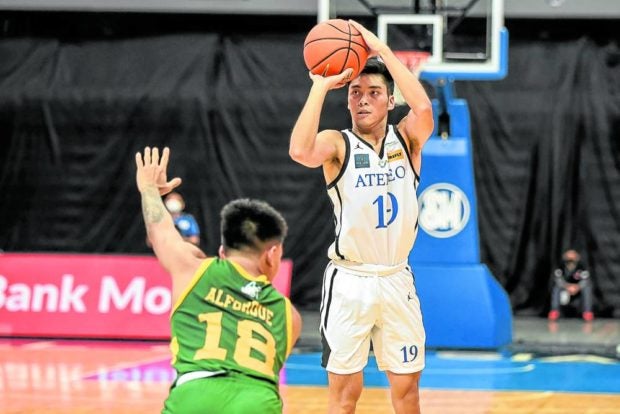 Tyler Tio scored all his 17 points in the third period, Dave Ildefonso and SJ Belangel came up clutch in the stretch and Ateneo—to no one’s surprise—stayed on top of the standings with a 79-70 victory over Far Eastern University (FEU) in Tuesday’s UAAP men’s basketball feature at Mall of Asia Arena.

Tio waxed hot and got the Eagles soaring in the third by scoring eight straight points that built a 56-42 cushion then nailed a three-pointer to beat the shot clock to give Ateneo its biggest lead, 63-42, 2:32 left before the fourth.

“I’m just happy that my shots finally went in and I’m thankful for my teammates for believing in me,” said Tio, who shot four-of-six from beyond the arc in his torrid stretch and also had two rebounds, one assist and a steal.

Adamson got its act together as Jerom Lastimosa sparked an 82-66 rout of University of the East in the earlier match.

Lastimosa unloaded 11 of his team-high 14 points in the opening period, going two for two from beyond the arc there, while Keith Zaldivar contributed 11 points for the Falcons, who also tore away in the third period after Didat Hanapi nailed two free throws to give Adamson a 76-42 spread.

Adamson coach Nash Racela earned his first win with his new team, which improved to 1-1 after opening with a loss to National U.

“Of course, we’re very happy getting the first win,” said Racela. “The good thing about it is that slowly the things that we emphasized on, we were able to correct some of our lapses last game.”

Racela also used the game as a teaching moment for lapses committed outside the game, limiting minutes of certain players, including opening match top scorer Hanapi over, well, ice cream.

“It’s a very simple thing, but yesterday was the birthday of our athletic director Fr. Aldrin Suan and he sent food for dinner with cake … coaches reminded that we have a game early in the next day and it would be better not to eat ice cream but five of our guys still did get a scoop or two. It’s partly discipline. We’re teaching them something.”

Ateneo, meanwhile, took its second straight win but needed to ward off a strong fight-back from FEU in the fourth to climb to 2-0.

Tamaraws star rookie RJ Abarrientos fueled a 15-5 run, capped by his assist to Emman Ojuola that breached Ateneo’s double-digit barrier at 72-66 with 4:34 left.

Ildefonso came to the rescue for the Blue Eagles with a crucial trey to stop the bleeding and Belangel added a clutch floater for a 77-68 breather. Ildefonso then sank two free throws to seal Ateneo’s 28th straight victory in the league.