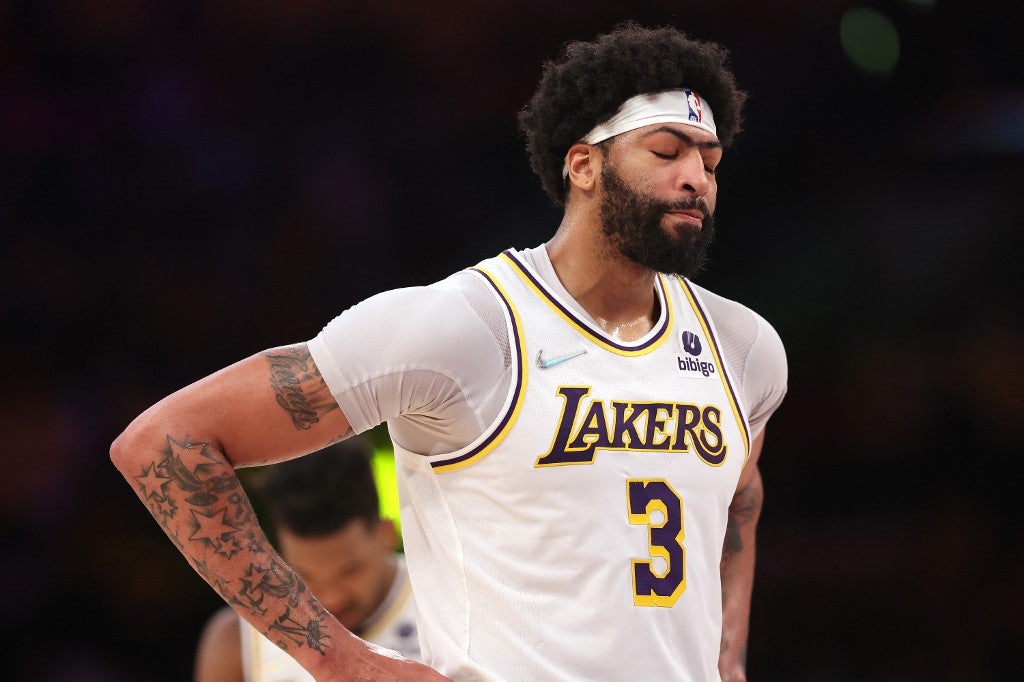 Anthony Davis #3 of the Los Angeles Lakers looks on after being defeated by the Denver Nuggets 129-118 in a game at Crypto.com Arena on April 03, 2022 in Los Angeles, California. Copyright 2022 NBAE Sean M. Haffey/Getty Images/AFP

The Los Angeles Lakers remain in desperation mode as they inch closer to being eliminated from play-in berth consideration.

The Lakers have lost six straight contests and 19 of their past 24 as they enter Tuesday night’s must-win road game against the NBA-best Phoenix Suns (62-16).

Los Angeles (31-47) trails the 10th-place San Antonio Spurs (33-45) by two games and the ninth-place New Orleans Pelicans (34-44) by three games in the three-way battle for the final two play-in spots. Both San Antonio and New Orleans own tiebreaker edges against Los Angeles.

So to gain the edge over the Spurs, the Lakers have to win three more games than San Antonio over the final four games of the season. As for the Pelicans, any New Orleans win or Los Angeles loss eliminates the chance of the Lakers catching them.

It certainly ranks as a dire situation for a club that has badly collapsed over the past eight-plus weeks.

More math for Vogel to consider: The Lakers are 0-3 against the Suns this season and 1-5 over the past six regular-season meetings. Phoenix also won a six-game, first-round playoff series against Los Angeles last season.

The Lakers are hopeful of having forward LeBron James on the floor Tuesday after he missed four of the past six games due to an ankle injury. He is listed as questionable.

James is averaging 30.3 points over 56 games and needs to play in two of Los Angeles’ final four games to qualify for a shot at the NBA scoring title. James last Friday scored 38 points in a damaging 114-111 home loss to the Pelicans.

Big man Anthony Davis also is listed as questionable. He has played in the last two games after missing 18 straight due to a foot injury. Davis had 28 points, nine rebounds and eight assists against Denver.

What bothers Davis is how the trio of himself, James and point guard Russell Westbrook were unable to establish a rhythm due to injury absences of James and Davis.

“We didn’t expect to only have 21 games together, but that’s been all year,” Davis said. “The times we were together, we looked good. … That being said, we still have enough (players) to play a basketball game. We will continue to fight this way, give ourselves a chance and see what happens.”

Phoenix has lost consecutive games to the Memphis Grizzlies and Oklahoma City Thunder. Its next victory will establish a franchise mark for wins in a season. The 1992-93 and 2004-05 teams also won 62 games.

However, coach Monty Williams wasn’t interested in discussing possible accomplishments after his club was badly outplayed in the second half of Sunday’s 117-96 road loss against the lowly Thunder. Phoenix was outscored 65-43 over the final 24 minutes.

“We’ve got to get back to playing our kind of basketball,” Williams said. “We had a bad second half. We didn’t play well, didn’t make a shot, didn’t have great energy, and they did. They played with great energy the whole night. You give them a lot of credit. We can sit here and talk about what we didn’t do, but they did well the whole night.”

Veteran point guard Chris Paul had a similar view of the shaky performance in which the Suns were outrebounded 54-33 and shot a season-low 18.4 percent (7 of 38) from 3-point range while the Thunder were knocking down 17 of 41 (41.5 percent) from long range.

“Usually, we impose our will on defense, and we didn’t,” Paul said. “So you gotta give them a lot of credit. They moved the ball, shot the ball extremely well and they beat us.”