NBA: Lakers ‘extremely disappointed’ after missing out on playoffs The Los Angeles Lakers were officially eliminated from postseason contention on Tuesday as the Phoenix Suns sent the crisis-stricken NBA giants spinning to a seventh straight defeat.

With an injured LeBron James watching from the sidelines, the Lakers’ faint hopes of scraping into the playoffs were snuffed out as the Western Conference leaders turned on the style to complete a convincing 121-110 win in Phoenix.

The Los Angeles defeat -– and San Antonio’s 116-97 win over the Denver Nuggets earlier Tuesday -– mean the Lakers will not be in the postseason for the first time since 2019.

It is only the fourth time since James entered the league in 2003 that the NBA superstar has failed to reach the postseason.

“We wanted to play our part in bringing success to Laker basketball and we fell short. It’s not been due to a lack of effort. We have all put in the work.

“Guys stayed fighting right to the end. We brought integrity to the process we just fell short through a disjointed season. We’re all disappointed.”

Tuesday’s loss brings the curtain down on a miserable campaign for the Lakers.

A decision to rebuild their roster last year in a blockbuster trade for Russell Westbrook has been a spectacular failure, accentuated by a long-term injury to Anthony Davis that kept the star forward sidelined for roughly half the season.

A pall of gloom shrouded the NBA’s most glamorous franchise in recent weeks, as loss after costly loss piled up to leave the 17-time NBA champions needing a miraculous sequence of results to somehow scrape into the play-in tournament.

Before Tuesday’s game, social media had been ablaze with speculation that the Lakers will move quickly to fire beleaguered coach Vogel, who led the team to the NBA championship in 2020.

Philadelphia 76ers coach Doc Rivers and Utah Jazz coach Quin Snyder have both been linked to the Lakers hot seat.

With San Antonio clinching victory over Denver well before the Lakers-Suns game had finished, Los Angeles knew that only a win would do in Phoenix.

‘Playing for our lives’ 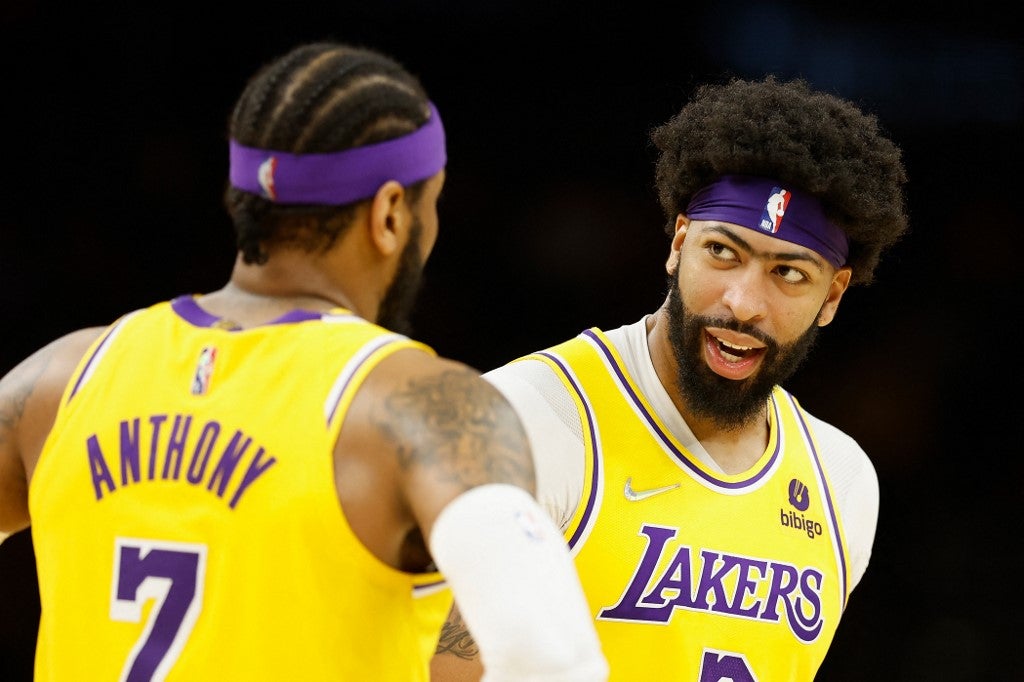 Anthony Davis #3 of the Los Angeles Lakers talks with Carmelo Anthony #7 during the second half of the NBA game against the Phoenix Suns at Footprint Center on April 05, 2022 in Phoenix, Arizona.  Christian Petersen/Getty Images/AFP

But after a bright opening they were rapidly outclassed.

The Suns surged into a 59-50 lead shortly before half-time and kept the hammer down in the third quarter, Devin Booker draining a three-point jump shot to put Phoenix 84-65 ahead before the Suns pulled 26 points clear.

Booker led the scoring for Phoenix with 32 points, with Deandre Ayton adding 22.

Vogel said knowledge of San Antonio’s win over Denver had not changed his team’s approach against Phoenix.

“We’ve been playing for our lives for the last five, six, seven games,” Vogel said. “It didn’t change anything.”

Westbrook, meanwhile, could not pinpoint how the Lakers’ season had gone awry.

“There’s not one thing,” Westbrook said. “There’s so many different things that happened but I don’t like to point fingers or blame anybody.”