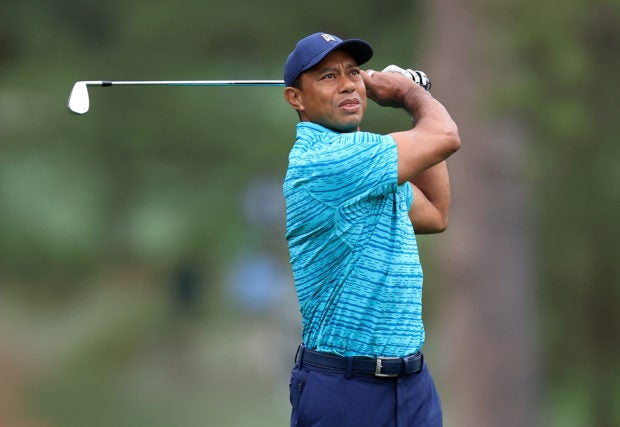 Tiger Woods follows his shot on the 17th hole during the second round of The Masters at Augusta National Golf Club on April 08, 2022 in Augusta, Georgia.   (Getty Images via AFP)

AUGUSTA – Tiger Woods faltered early then battled back into contention as his incredible comeback from severe leg injuries withstood gusting winds that wreaked havoc in Friday’s second round of the Masters.

The 15-time major champion fired a roller-coaster two-over par 74 to stand on one-over par 145 after 36 holes at Augusta National, nine adrift of leader Scottie Scheffler but only four back of second place.

“I’ve got a chance going into the weekend,” Woods said. “Hopefully I’ll have one of those lightbulb moments, turn it on and get it done.

“On the back nine on Sunday anything can happen. I’ve just got to get myself there.”

World number one Scheffler, seeking his first major title, was leading on the course at eight-under overall through 17 holes.

Woods, making an epic return 14 months after a horrific car crash, teed off only three strokes behind the leaders Friday but made four bogeys on the first five holes.

“It was blustery. It was windy, swirling all over the place,” Woods said. “I got a couple bad gusts and I made a couple bad swings.

“It was almost, ‘What else could go wrong?'”

He was at risk of missing the cut despite a solid opening 71, but rallied to carry his comeback charge into the weekend as he chased a record-tying sixth Masters crown.

As for his condition, Woods admitted, “I don’t feel as good as I’d like to feel.”

South African Charl Schwartzel, the 2011 Masters champion who has missed the cut in his six 2022 US PGA starts, fired a 69 for three-under 141, tied with  South Korean Im Sung-jae, who stumbled to a 74, and Ireland’s Shane Lowry, who shot 68.

“I never thought about a score,” Schwartzel said. “I did a very good job staying in the moment and hit every shot where I aimed in. I was very disciplined and didn’t give myself any trouble.”

Despite his struggles, the buzz around the course remained with Woods as spectators lined every hole to watch the 46-year-old legend as he battled the pain in his surgically repaired right leg to walk the hilly 7,510-yard layout.

Rods, plates and pins help hold together his leg after he was hospitalized for weeks and unable to walk for months. Rehabilitation work has allowed the medical marvel to make an epic comeback in an iconic setting.

Woods teed off in the third-to-last group alongside only Chile’s Joaquin Niemann after 2010 British Open champion Louis Oosthuizen of South Africa withdrew due to injury.

He missed seven-foot par putts at the first and third holes after saving par from a fairway bunker ant the second. He missed the green at the par-3 fourth on the way to bogey and sent his tee shot right into trees on the way to another bogey at the fifth before halting the slide.

Woods, who has slid to 973rd in world rankings, could match the all-time Masters win record of six by Jack Nicklaus and break the record he shares with Sam Snead of 82 career US PGA victories.