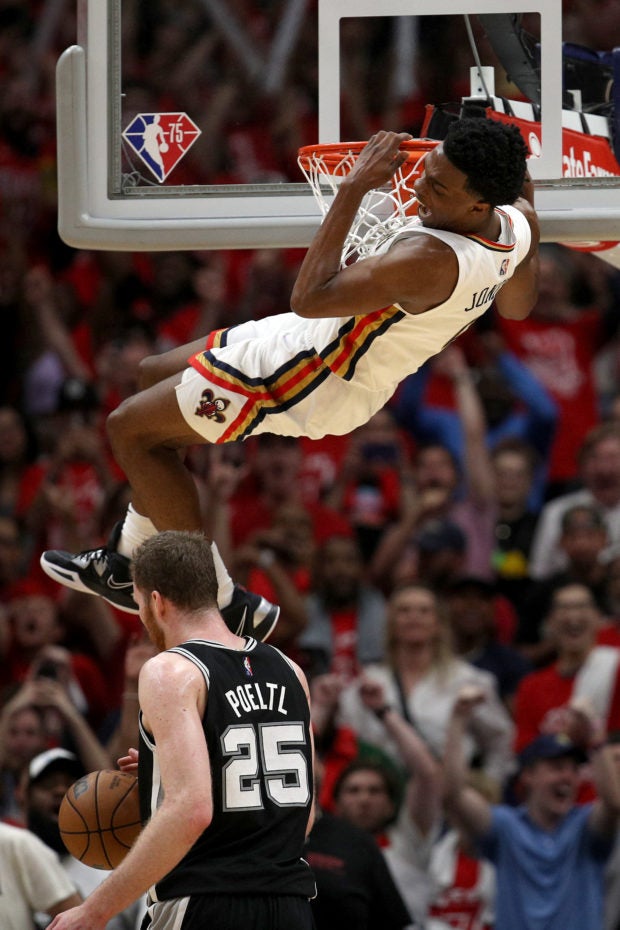 Herbert Jones of the New Orleans Pelicans reacts after dunking the ball over Jakob Poeltl of the San Antonio Spurs during the fourth quarter of the 2022 NBA Play-In Tournament at Smoothie King Center on April 13, 2022 in New Orleans, Louisiana. The Pelicans won, 113 – 103.  (Getty Images via AFP)

C.J. McCollum led the scoring with 32 points as the Pelicans punched their ticket to a win-or-go-home against the Los Angeles Clippers on Friday.

The winner of that game will advance to a first round playoff series against the top-seeded Phoenix Suns.

New Orleans were given a scare by San Antonio down the stretch however after the Spurs gradually chipped away at a 21-point deficit early in the fourth quarter to trail by just six points with around five minutes left.

But eight points in the closing stages from Brandon Ingram, who finished with 27 points, and a big defensive display from Jonas Valanciunas (22 points, 14 rebounds, two blocks) settled the Pelicans’ nerves and closed out the win.

“I thought we did a pretty good job of showing poise down the stretch,” McCollum said. “We had some lapses, but all in all it was a good defensive effort.”

The defeat could possibly be the last NBA game in the glittering career of San Antonio’s veteran coach Gregg Popovich.

The 73-year-old led the Spurs to five NBA championships but has faced increased speculation about his future this season, with many around the NBA tipping that he may retire after 26 seasons.

Popovich however quickly shut down questions about whether he planned to return next season.

“That question’s inappropriate,” Popovich told a reporter, instead preferring to dwell on the growth of his young team, who have an average of 24.

“We’ve never quit all year long and tonight was a good example,” Popovich said. “We played poorly for three quarters and the three best players for New Orleans all played great. If that happens, you’re going to lose if you don’t match it.”

“It’s the playoffs. The physicality and the grunt is really important, and we didn’t have it for three quarters,” he added.

“Great lessons for our guys. I don’t know if it was the enormity of the situation …Our youth showed until we collected ourselves, but it took too long.”