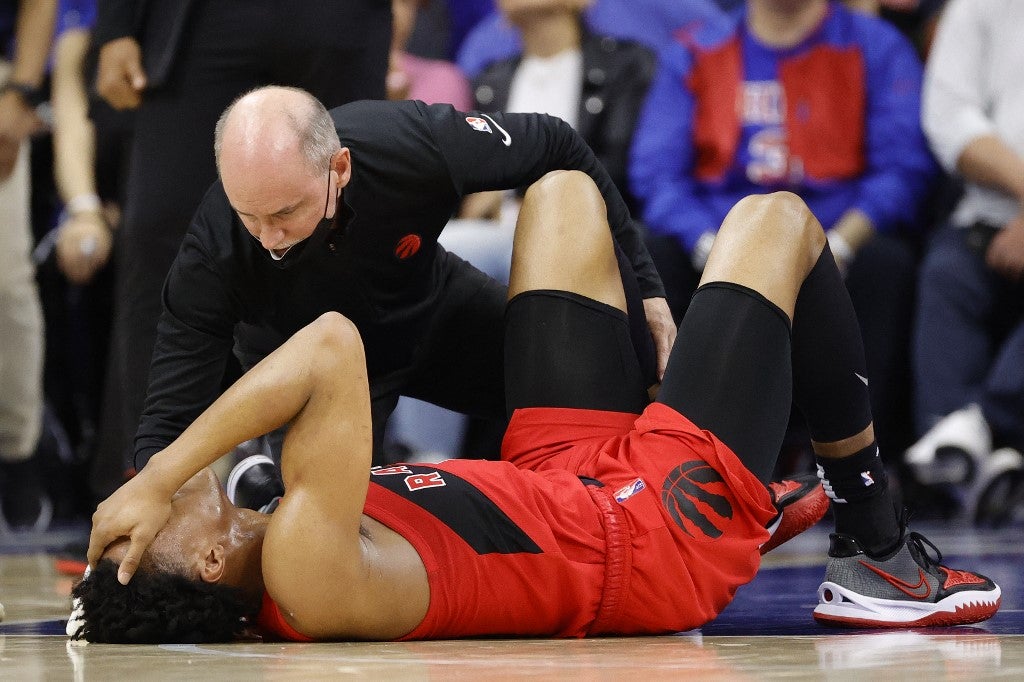 Scottie Barnes #4 of the Toronto Raptors receives medical attention during the fourth quarter against the Philadelphia 76ers during Game One of the Eastern Conference First Round at Wells Fargo Center on April 16, 2022 in Philadelphia, Pennsylvania. Tim Nwachukwu/Getty Images/AFP

Toronto Raptors rookie forward Scottie Barnes sustained a sprained left ankle in Game 1 of the Eastern Conference first-round series against the Philadelphia 76ers and is listed as doubtful for Monday’s Game 2.

The Raptors said Sunday that Barnes and Young both underwent MRI exams.

“It doesn’t look good for any of them,” Toronto coach Nick Nurse said of the trio after Sunday’s practice at Temple University. “We’ll evaluate them as we go and see where we end up.”

The fifth-seeded Raptors lost Game 1 131-111. With 9:06 remaining and the Raptors trailing 112-94, Barnes was helped off the court after 76ers center Joel Embiid stepped on his foot.

Barnes, who had been flirting with a triple-double, immediately fell to the floor and rolled over in pain. Medical staff came to assist him once play had been stopped.

The rookie of the year candidate finished with 15 points, a team-high 10 rebounds and eight assists in his postseason debut.

Trent had nine points on 2-of-11 shooting in 26 minutes and Young was scoreless in six minutes on Saturday against the fourth-seeded 76ers.