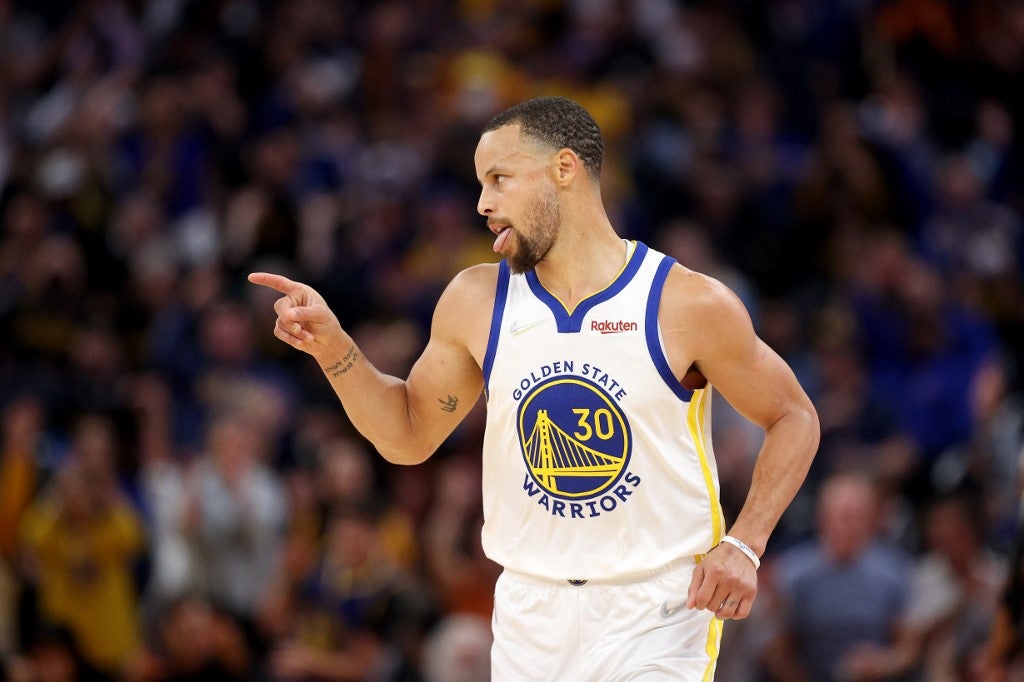 Stephen Curry #30 of the Golden State Warriors reacts after he made a basket against the Denver Nuggets in the first half during Game Two of the Western Conference First Round NBA Playoffs at Chase Center on April 18, 2022 in San Francisco, California. Ezra Shaw/Getty Images/AFP

Stephen Curry came off the bench to score 34 points in 23 minutes and Jordan Poole again stood out with 29 points and eight assists as the Golden State Warriors posted a convincing 126-106 victory over the Denver Nuggets on Monday night at San Francisco.

Klay Thompson added 21 points as the Warriors took a 2-0 lead in the Western Conference first-round series. Andrew Wiggins had 13 points and eight rebounds for Golden State, which won the first two games by an average of 18 points.

Chef Curry with the pot 👨‍🍳

Steph Curry is up to 34 points for the @warriors.#NBAPlayoffs presented by Google Pixel on TNT pic.twitter.com/KqjkL5hVhE

Nikola Jokic recorded 26 points and 11 rebounds for the Nuggets before drawing his second technical foul and earning an ejection with seven minutes remaining.

Game 3 of the best-of-seven series is Thursday night in Denver.

Curry came off the bench for the second straight game after missing the previous 12 contests with a left foot injury. He connected on 12 of 17 shots and hit 5 of 10 from 3-point range.

💦 Steph couldn't hold back his excitement after the 4-point-play

Poole, 22, was electric for the second straight game while turning the Splash Brothers into a trio. He made 10 of 16 field-goal attempts, including 5 of 10 from 3-point range.

Thompson added three 3-pointers as Golden State made 17 of 40 (42.5 percent) from behind the arc and shot 54.8 percent overall.

The Nuggets shot 42.5 percent from the floor and were 13 of 46 (36.1 percent) from behind the arc. Will Barton had 12 points and 10 rebounds and Monte Morris and Bones Hyland also scored 12 apiece for the Nuggets.

The Warriors seized control in the second quarter with a 16-0 surge that turned a 12-point deficit into a 47-43 lead.

Curry’s driving layup gave Golden State its first lead of the game at 44-43 with 4:11 left in the half. Poole culminated the run with a 3-pointer 33 seconds later.

The Warriors led 57-51 at the break and then began the third quarter with a 10-2 burst to take a 14-point advantage. Poole recorded a four-point play to start the half and completed the surge with three free throws after being fouled while shooting a 3-point attempt.

The Nuggets moved within 72-64 on Jokic’s basket with 5:48 left before Thompson scored eight points during a 16-4 spurt that saw Golden State stretch the lead to 20. Curry capped it with a four-point play to make it 88-68 with 2:54 remaining.

The Warriors took a 101-81 lead into the final stanza. Thompson opened the fourth quarter with a trey and Golden State cruised to the finish.