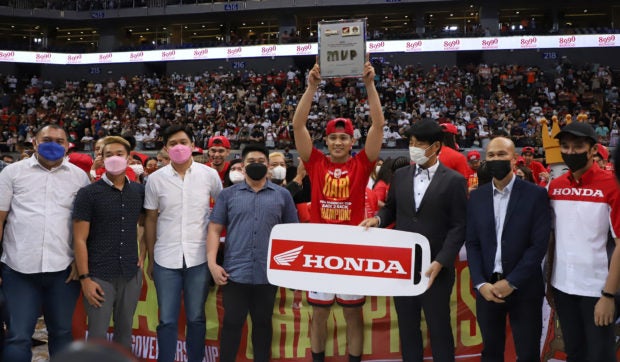 MANILA, Philippines — Barangay Ginebra coach Tim Cone had nothing but praise for guard Scottie Thompson, who capped his stellar conference with the Finals’ Most Valuable Player plum.

There was no doubt in Cone’s mind that Thompson deserved all his achievements this conference, winning the Best Player of the Conference and his second PBA Finals MVP since the 2018 Commissioner’s Cup.

The multi-titled PBA coach again likened Thompson to former Alaska player Johnny Abarrientos, who is one of the league’s greatest guards.

“Well, is there a player who’s more deserving? I mean, all the things he does for us, defensively, offensively, on the boards,” said Cone after Ginebra’s 103-92 victory over Meralco in Game 6 on Friday at Mall of Asia Arena.

“I have so much history, I got 30 years of experience, so I’m into comparisons. And, again, it’s very similar to what Johnny Abarrientos used to do for us. He played great defense, he could rebound great for a guard, and he was such a great controller of the game. And he never got tired, and he always hustled, never got tired. That was Johnny’s big thing, he never got tired.”

Cone won nine PBA titles together with Abarrientos from 1996 to 2000.

“When I was a young coach, I used to make our guys do really, really hard drills, and Johnny would do the hard drill and look at me and smile while he was doing it, and laugh. And everybody else was dying, but Johnny wasn’t,” Cone shared.

“Scottie never gets tired either. We played him 47 minutes and something like 35 seconds in one game, I just couldn’t take him off the floor.”