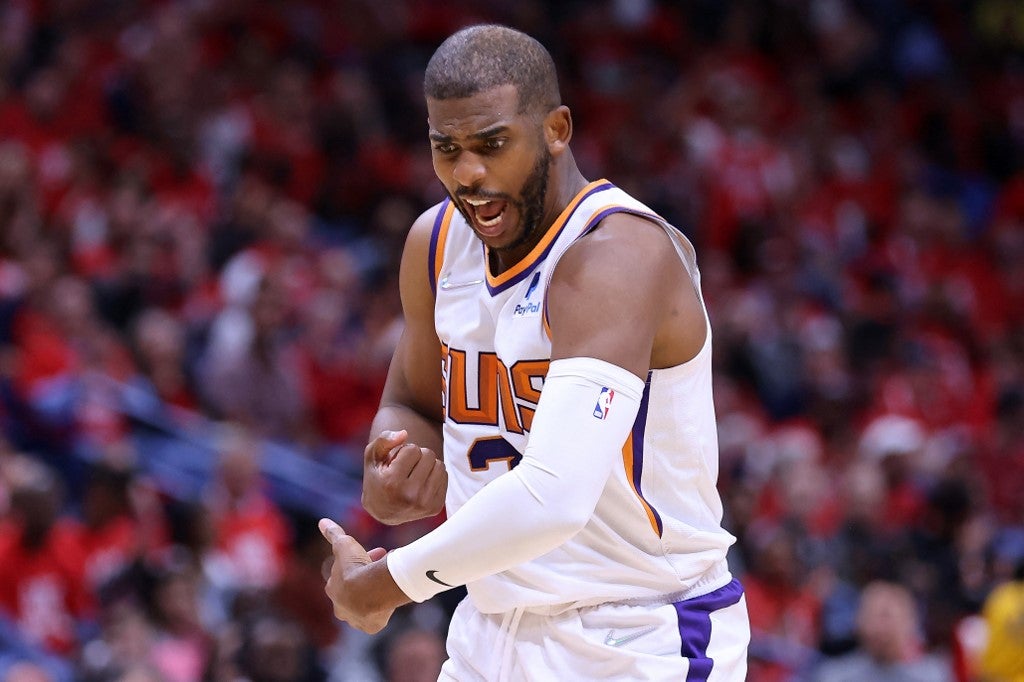 Chris Paul #3 of the Phoenix Suns reacts during the second half of Game Three of the Western Conference First Round game against the New Orleans Pelicans at the Smoothie King Center on April 22, 2022 in New Orleans, Louisiana.  Jonathan Bachman/Getty Images/AFP

Chris Paul scored 19 of his 28 points in the fourth quarter and also recorded 14 assists without committing a turnover to lead the Phoenix Suns to a 114-111 victory over the host New Orleans Pelicans on Friday night.

Deandre Ayton added 28 points on 13-of-20 shooting and collected 17 rebounds to help the Suns take a 2-1 lead in the best-of-seven Western Conference first-round playoff series. Phoenix prevailed despite Devin Booker being sidelined due to a right hamstring injury.

Cameron Johnson started in place of Booker, who was injured in Game 2 and is expected to miss the rest of the series. Without the long-range bomber, Phoenix focused on the inside game as Ayton and JaVale McGee (15 points on 7-of-8 shooting) helped the Suns produce a 64-40 edge in points in the paint.

☀ @CP3 felt the game slipping away and TOOK OVER in Q4!

Jae Crowder scored back-to-back baskets to give the Suns a 102-95 lead with 2:08 left in the game. McCollum scored a basket for the Pelicans with 1:55 left, but Paul hit a floater and Mikal Bridges sank two free throws to make it 106-97 with 49 seconds remaining.

Ingram tallied nine points in less than 20 seconds as New Orleans trimmed its deficit to 110-106 with 22.5 seconds to play. However, Bridges made four straight free throws as Phoenix staved off the charge.

Bridges tallied 17 points and Crowder added 10 for Phoenix, which shot 50.6 percent from the field despite being a miserable 15.4 percent from 3-point range (4 of 26). The Suns committed just six turnovers while forcing New Orleans into 15 giveaways.

Devonte’ Graham and Herbert Jones added 12 points apiece for the Pelicans, who made 48.1 percent of their shots and were 11 of 32 (34.4 percent) from behind the arc.

The score was tied at 43 in the second quarter when New Orleans’ Jaxson Hayes pummeled Crowder as McCollum’s shot went through the net. The officials reviewed the play and gave Hayes a flagrant-2 foul and an ejection with 5:13 left in the half.

The Suns were energized after the incident and went on a half-closing, 16-5 burst to lead 59-48 at the break. Ayton led Phoenix with 21 first-half points.

New Orleans trailed by 13 early in the third quarter but later inched ahead at 74-73 on Ingram’s jumper with 3:33 left. Phoenix led 81-79 entering the final stanza.

Read Next
UAAP: Adamson boosts Final Four bid, turns back UST
EDITORS' PICK
TNT brings Sarah G and Mimiyuuuh together for epic collab
Imee Marcos tests positive for COVID-19
Dengue cases in PH continue to swell: 92,343 as of July 23
House energy committee chair Arroyo bats for cheap electricity
‘Revolting’: 29,000 teachers left out after PS-DBM bought pricey, outdated laptops
SMDC all set for growth, prepared to face market resurgence
MOST READ
Raffy Tulfo blasts ‘killjoy’ critics of Angara’s birthday party: It’s for charity
Homeowners of BF Homes in Parañaque protest opening of 5 gates to public
Jaya, family safe after house burned down in US
Bongbong Marcos to PNP: Use of force must be reasonable, justifiable and only when necessary
Don't miss out on the latest news and information.