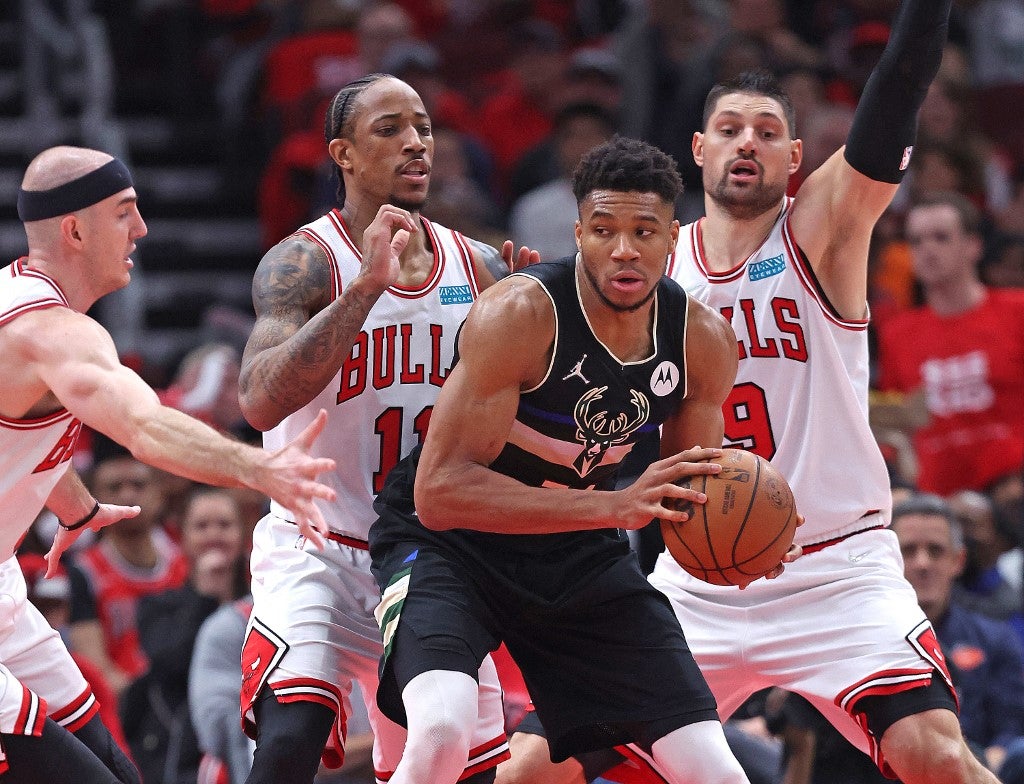 Giannis Antetokounmpo #34 of the Milwaukee Bucks looks to move against (L-R) Alex Caruso #6, DeMar DeRozan #11 and Nikola Vucevic #9 of the Chicago Bulls during Game Four of the Eastern Conference First Round Playoffs at the United Center on April 24, 2022 in Chicago, Illinois. Jonathan Daniel/Getty Images/AFP

Grayson Allen continued to torture the host Chicago Bulls with 27 points off the bench in 28 minutes, Giannis Antetokounmpo scored 32 more and the Milwaukee Bucks completed a two-game road sweep with a dominant 119-95 victory in Game 4 of their Eastern Conference playoff series on Sunday afternoon.

The third-seeded Bucks, who have won 15 of their last 17 first-round playoff games, own a 3-1 series lead and will go for the clincher in the best-of-seven series on Wednesday night in Milwaukee.

He becomes the 7th player in NBA history with at least 5 such Playoff games. https://t.co/WS67xOZgLS

Getting increased playing time in the absence of injured Khris Middleton, Allen shot 10-for-12 overall and 6-for-7 on 3-pointers en route to his second straight postseason career-high.

After totaling just three points in the first two games of the series, Allen exploded for 22 points in Friday’s 111-81 win at Chicago.

Antetokounmpo chipped in with 11-for-22 shooting from the field, helping the Bucks scorch the nets to the tune of 52.3 percent. The Most Valuable Player candidate completed his third double-double of the series and 44th of his postseason career with a game-high 17 rebounds.

Attempting to rebound from a defeat as they had in Game 2 in Milwaukee to draw even, the Bulls hung within 25-24 into the second minute of the second quarter before falling gradually behind.

The Bucks’ biggest push occurred over the final 2:39 of the period, when Allen contributed two- and 3-point hoops to an 8-2 run that turned a nine-point game into a 56-41 halftime advantage.

Chicago suffered a key blow during that stretch when Alex Caruso took a Jevon Carter forearm in the face and had to leave the game. Caruso had a bloody nose as he went to the locker room, was examined for a concussion and did not return.

The sixth-seeded Bulls got no closer than eight in the second half.

Holiday added 5-for-8 accuracy on 3-pointers to Allen’s 6-for-7, helping Milwaukee go 17-for-33 and outscore the hosts 51-27 points advantage from deep.

The Bulls have never rallied to win a playoff series after falling behind 3-1.