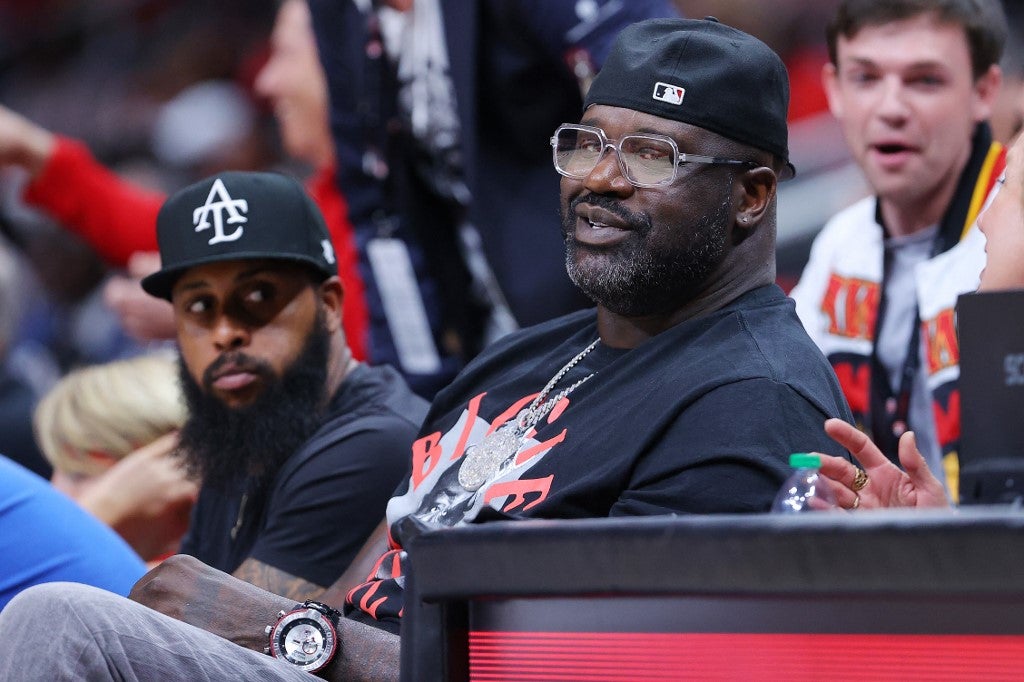 Former NBA player Shaquille O’Neal looks on during the second quarter in Game Three of the Eastern Conference First Round between the Miami Heat and the Atlanta Hawks at State Farm Arena on April 22, 2022 in Atlanta, Georgia. Kevin C. Cox/Getty Images/AFP

LOS ANGELES – The Los Angeles Lakers should keep their ‘Big Three’ of LeBron James, Russell Westbrook and Anthony Davis together but need to surround them with young players who can knock down shots, Lakers legend Shaquille O’Neal has said.

Injuries sidelined Davis and James for stretches of the season and prevented the trio from ever finding a rhythm. The veteran squad, which was the oldest in the league with an average age of 30, ultimately missed the playoffs.

“I think they definitely have to get younger,” O’Neal told Reuters while promoting Icy Hot pain-relief patches.

“So if they can keep LeBron, Russell and AD, everyone else needs to be very young. You can’t have five or six guys in their upper 30s because the league is getting younger and faster.”

“To have, as Chuck (Charles Barkley) says, old geezers running up against these young boys, it’s not going to work over an 82-game stretch.”

The Lakers parted ways with Frank Vogel at the end of the season despite the head coach having led the team to a championship inside the NBA Bubble in 2020.

O’Neal said Mark Jackson, who infused a young Golden State Warriors team with confidence that later helped them flourish into a dynasty under Steve Kerr, would be his pick to replace Vogel.

“Mark Jackson helped build Golden State before Steve Kerr took it to the next level,” he said. “He made it a very sexy brand to watch, so I’m sure he can do that with LeBron and Russ.”

O’Neal said he is a fan of the popular and controversial HBO show “Winning Time,” a scripted series on the rise of the Showtime era Lakers in the 1980s.

“I like it but I don’t like how they depict my good friend Jerry West. But other than that I think it’s very interesting.”

West, the Lakers former general manager, is depicted in early episodes as having a hot temper and the Hall of Famer has asked for an apology and even threatened legal action against the show’s creators.

“Jerry was always kind and compassionate to me. I’ve never seen him have those meltdowns. So I think that portrayal of Mr. West was probably false,” said O’Neal.

Despite that, he said he would welcome a second season focused on the Shaq and Kobe Bryant-led Lakers, who won three straight championships starting in 2000.

“I’m the type where you can say or do whatever you want, no problem. I understand the entertainment world,” added O’Neal, who won an Academy Award last month as a producer on “The Queen of Basketball,” a short subject documentary on the life of pioneering star Lusia Harris.

He said a desire to celebrate female athletes was part of what inspired him to work on the documentary and noted that the new Icy Hot campaign sees him partnered with tennis champion Sloane Stephens and National Women’s Soccer League star Rose Lavelle.

In recent interviews, O’Neal has opened up about regrets he has about his personal life, particularly when it comes to the end of his marriage to Shaunie O’Neal, in which he has said he made “terrible mistakes.”

The pair have four children and divorced in 2011.

O’Neal has also expressed regrets with how he handled his relationship at times with Bryant, who died in a helicopter crash in January 2020, and former Orlando Magic teammate Penny Hardaway.

O’Neal, 50, said he has grown more introspective with age.

“When you’re older you reflect more and if somebody asks you a question, you have to be honest,” he said.

“I’m not going to sit up here and disrespect my former queen. I’ve got to be honest about what went wrong and how it went wrong.

“Sometimes you’ve got to take accountability … so if I did something that was my fault, I’m man enough to look the person in the eye and say it was my fault.”