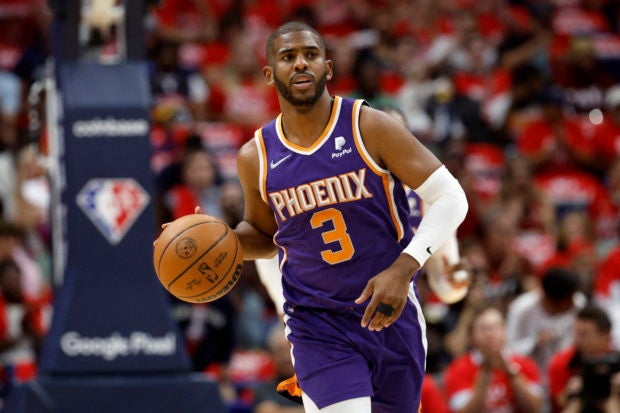 Chris Paul of the Phoenix Suns looks on during the game against the New Orleans Pelicans at Smoothie King Center on April 28, 2022 in New Orleans, Louisiana.  (Getty Images via AFP)

LOS ANGELES – Chris Paul produced a perfect display of shooting to lead the Phoenix Suns to a series-clinching victory over New Orleans and advanced in the NBA playoffs on Thursday.

The 12-time All-Star Paul made 14-of-14 shots from the field to set a new postseason record as the Suns defeated the Pelicans 115-109 to complete a 4-2 series victory in the Big Easy.

It marked an emotional return to New Orleans for Paul, who began his professional career in the city with six seasons for the then-Hornets between 2005 and 2011.

“I always say this city raised me,” Paul said. “It’s nice to do it here in New Orleans… it’s home for me. I root for this team when I’m not playing against them.

“It’s unbelievably special. You have no clue what it’s like for me to walk into this building. Everybody that works here, they’re like part of my family. This is like my family. There’s nothing like playing in this city.”

The Suns were also buoyed by the return from injury of Devin Booker, whose 13-point haul included a crucial three-pointer late in the fourth quarter to edge Phoenix ahead.

“Having Book back was everything,” Paul added. “Down the stretch they started to blitz and they forgot we had Devin Booker standing over there on the wing.” Devin Booker of the Phoenix Suns shoots the ball over Jose Alvarado of the New Orleans Pelicans at Smoothie King Center on April 28, 2022 in New Orleans, Louisiana.  (Getty Images via AFP)

“I’ve been watching him since I was eight years old,” Booker said. “It doesn’t surprise me.

“It gives you the utmost confidence, playing alongside him, knowing he’s going to take care of the ball, knowing that the ball is going to find the right person, on time, on target.”

The Suns will play the Dallas Mavericks in the Western Conference semi-finals.

The Mavericks dug deep to defeat Utah 98-96 on the road in Salt Lake City to complete a 4-2 series win over the Jazz.

Luka Doncic and Jalen Brunson scored 24 points apiece as Dallas fought back from a 12-point third-quarter deficit for a gutsy win.

Utah’s Bogdan Bogdanovic missed a wide-open three to win the game on the buzzer as Dallas escaped with victory.