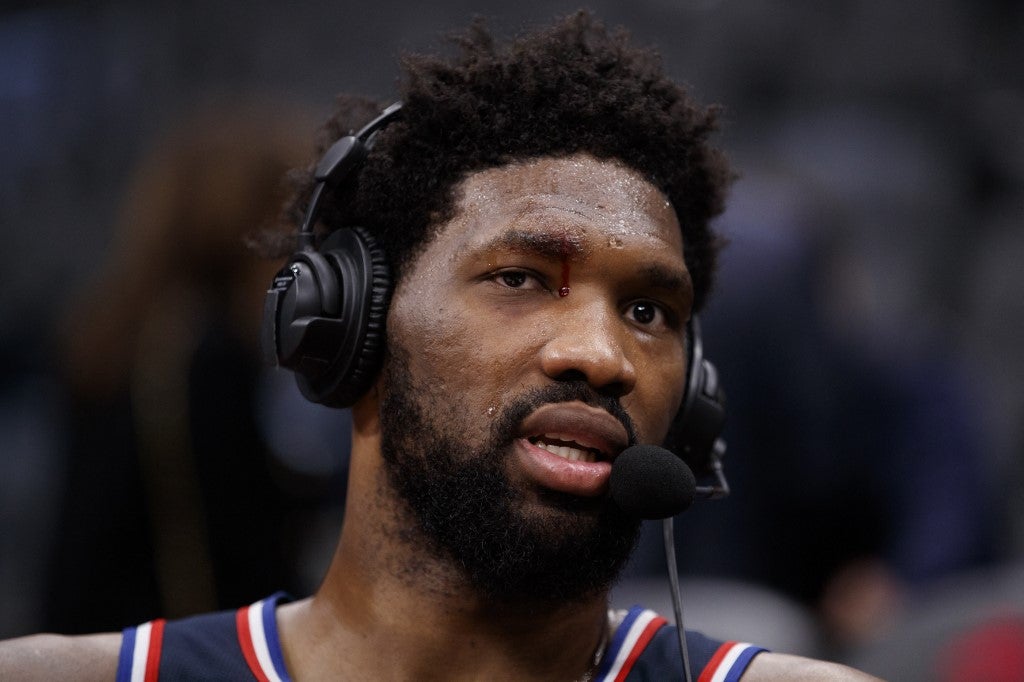 Joel Embiid #21 of the Philadelphia 76ers drips blood from his brow after a 132-97 win in Game Six of the Eastern Conference First Round against the Toronto Raptors. Cole Burston/Getty Images/AFP

Philadelphia 76ers center Joel Embiid, one of the leading candidates for NBA Most Valuable Player, is sidelined indefinitely due to a fractured right orbital bone and a mild concussion.

The team announced Friday that Embiid will miss at least Game 1 of the 76ers’ Eastern Conference semifinal series against the Miami Heat on Monday.

Embiid got hurt with 3:58 left in the 76ers’ clinching Game 6 against the host Toronto Raptors on Thursday. Philadelphia led 119-90 when Toronto’s Pascal Siakam caught Embiid in the face with an elbow on a drive to the basket.

A five-time All-Star, Embiid has experienced a similar facial injury. In 2018, he fractured his left orbital bone and was sidelined for three weeks before returning to action in the playoff, wearing a facemask.

Embiid, 28, came away from the play holding his face as Toronto fans cheered, possibly in response to a play earlier in the game when Embiid shoved the Raptors’ Chris Boucher in the back.

In the six games against Toronto, despite playing through a thumb injury, Embiid averaged 26.2 points and 11.3 rebounds. He sank a tiebreaking, turnaround 3-pointer to win Game 3 in the final second.

During the regular season, he averaged a league-leading 30.6 points and 11.4 boards.