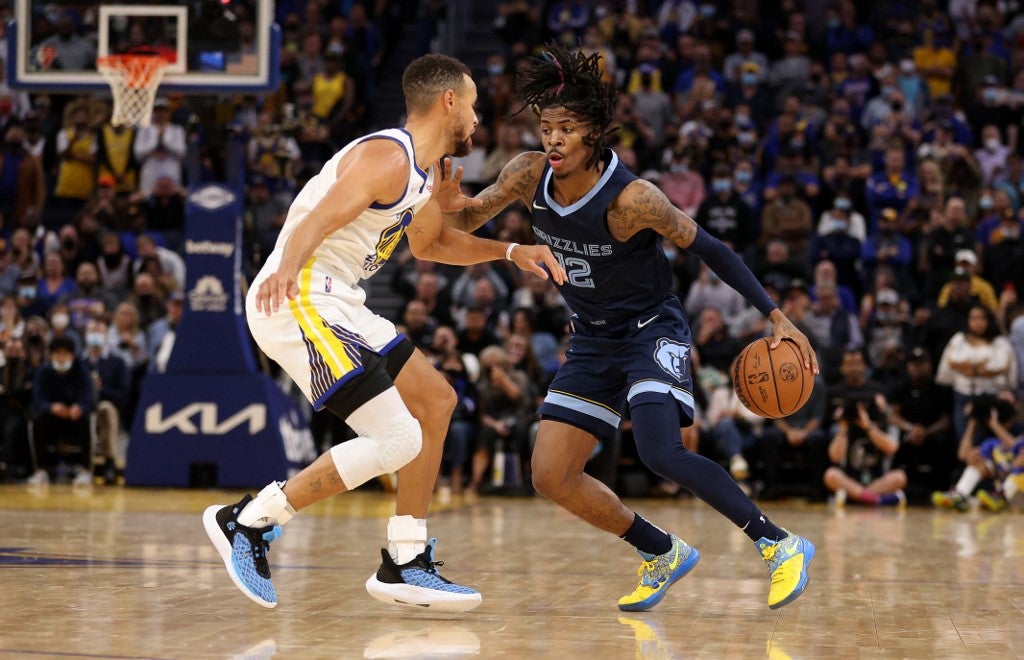 Ja Morant #12 of the Memphis Grizzlies is guarded by Stephen Curry #30 of the Golden State Warriors at Chase Center on October 28, 2021 in San Francisco, California. Ezra Shaw/Getty Images/AFP

The Golden State Warriors are looking to re-create their postseason magic, which included five consecutive NBA Finals appearances from 2015 to 2019.

The Memphis Grizzlies are new to the scene, coming off their first playoff series win in seven years.

The second-seeded Grizzlies and third-seeded Warriors will showcase youthful energy versus veteran experience when the teams tip off in Game 1 of their best-of-seven Western Conference semifinal series Sunday in Memphis.

Golden State is coming off a 4-1 series win over the Denver Nuggets in the first round of the playoffs. The Warriors won all three games on their home court and split a pair of games on the road.

Klay Thompson (22.6 points per game in the playoffs) and Jordan Poole (21.0) also have scored early and often for Golden State. Andrew Wiggins is averaging 14.0 points and a team-high 6.8 rebounds.

Yet it is Curry who sets the tone for the Warriors’ up-tempo attack.

“He’s a lot stronger,” said Draymond Green, who is in his 10th season with Golden State. “When he’s driving to the hole, what teams used to do is bump him off his path. Can’t move him anymore. …

“You have to overreact to the shot. If you’re not pressed up and overreacting to the shot, then he shoots, and good luck. But once he puts his head down and drives it, and he’s committed to getting to the hole, he’s strong enough to take those bumps and not get pushed off his path.”

The Grizzlies also are determined to stay on their path.

Memphis held on for a 4-2 series win over the scrappy Minnesota Timberwolves in the opening round. The Grizzlies posted identical 2-1 records at home and on the road.

Although Bane scored the most points, Ja Morant commanded the most attention. He averaged 21.5 points, 10.5 assists and 8.7 rebounds in the six games against Minnesota.

Three other Grizzlies players averaged double-digit scoring in the first round, including Dillon Brooks (16.5 points per game), Brandon Clarke (16.5) and Jaren Jackson Jr. (11.8).

Jackson said he and his teammates had a bigger goal in mind after the series win.

“It’s a good feeling, but (we’re) still not satisfied,” he said. “You’ve got to keep raising your level.”

The series will pit Warriors head coach Steve Kerr against Grizzlies head coach Taylor Jenkins. Kerr has an 81-29 career record in the playoffs with three NBA championships, while Jenkins is 5-6 in the postseason.

Yet the past does not always dictate the future. Jenkins is confident in his young group.

“You definitely have got to celebrate moments like this,” Jenkins said after the first-round win. “You’ve got to cherish this. Winning a series, you don’t want to take for granted. …

NBA: With ‘chip on shoulder,’ resilient Grizzlies move on to face Warriors

NBA: Stephen Curry pours in 30 as Warriors knock out Nuggets