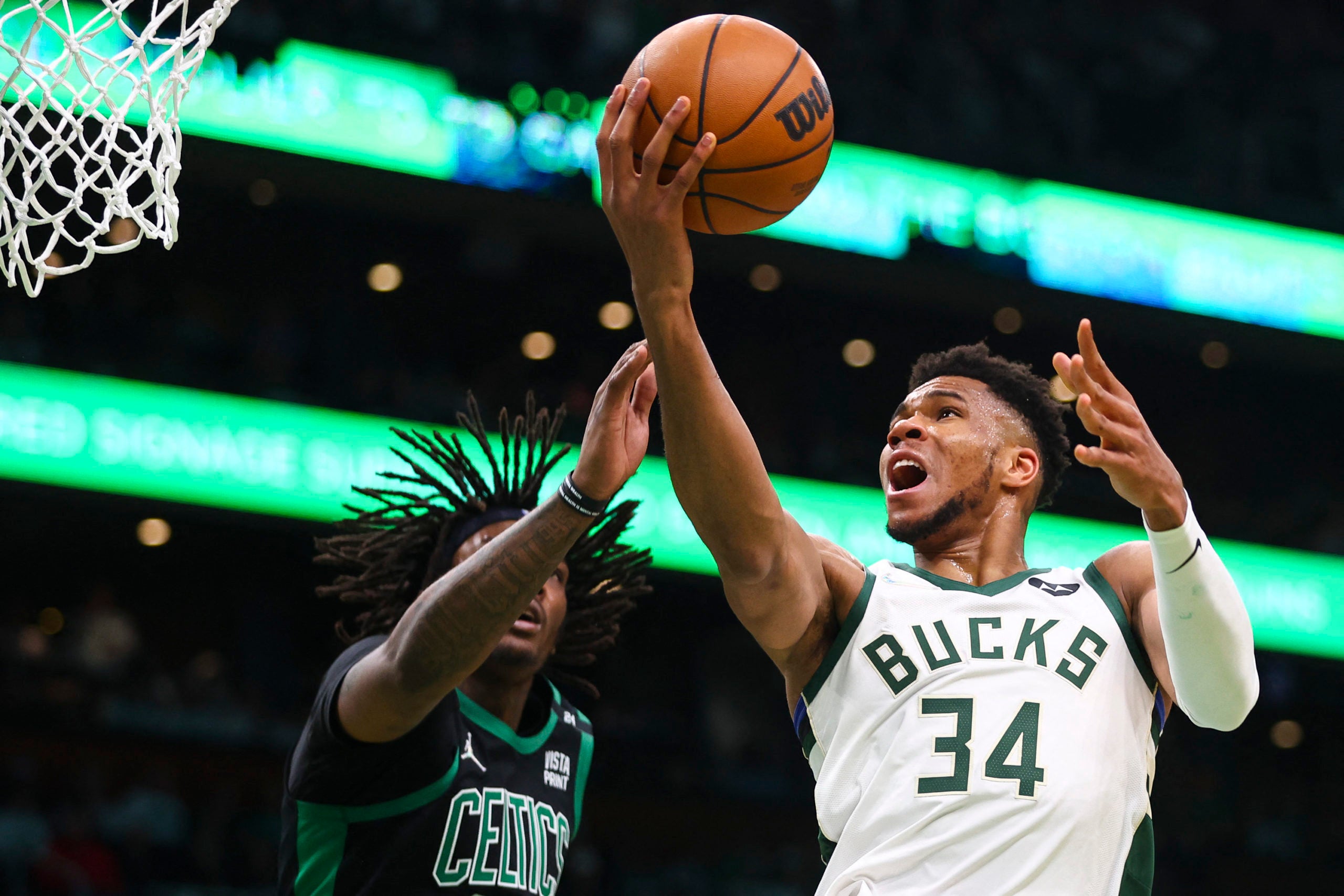 FILE– Giannis Antetokounmpo #34 of the Milwaukee Bucks drives to the basket past Robert Williams III #44 of the Boston Celtics during Game One of the Eastern Conference Semifinals at TD Garden on May 1, 2022 in Boston, Massachusetts. Adam Glanzman/Getty Images/AFP

Boston was not as fortunate against Giannis Antetokounmpo, who posted his second career playoff triple-double, in Milwaukee’s series-opening victory. The Celtics will look for a better performance against him Tuesday as they try to even their conference semifinal series at one victory apiece in Game 2 in Boston.

Antetokounmpo collected 24 points, 13 rebounds and 12 assists in Milwaukee’s 101-89 win on Sunday afternoon. The two-time NBA MVP provided the signature moment in the fourth quarter after tossing the ball high off the backboard and following it to the rim for an emphatic slam dunk.

“I can’t do that. I wouldn’t even think about trying,” teammate Jrue Holiday said of the self alley-oop by the star player known as the Greek Freak. “He’s got a great nickname.”

“That’s just pure talent, just pure instinct,” Bucks coach Mike Budenholzer said. “He’s a great player. He does things that are unique and special and timely. That’s one of those plays where you’re happy he’s on our side.”

So, what did it do the other side? After all, the Celtics touted the NBA’s top defense in the regular season and effectively shut down Durant and Kyrie Irving en route to sweeping the Nets in the first round of the playoffs.

“This one should hurt a little bit,” the Celtics’ Al Horford said. “We have an opportunity now to learn from this game, see how we can be better as a group and come out and do that Tuesday.” Speaking of hurt, Boston’s Marcus Smart sustained an injury to his right arm late in the first half on Sunday. The newly crowned NBA Defensive Player of the Year returned for the second half, but he is also nursing a troublesome right quad contusion. He will be listed as questionable for Tuesday’s game, Celtics coach Ime Udoka said.

“I think the quad bothered him more than the shoulder,” Udoka said. “But you know he’s gonna play through a lot and it could affect him. … He’s getting iced down now, so he’ll be OK.”

Now, will Boston stars Jayson Tatum and Jaylen Brown be OK after being held in check by Milwaukee’s bigger bodies and active perimeter defense?

“Give credit to Milwaukee,” Brown said. “They did a good job and had a good plan, but we missed a lot of open shots. They hit us in the mouth so we gotta be ready for the next one.”

Boston also will need to keep an eye on Holiday, who bounced back from a 10-point performance in Milwaukee’s series-clinching victory over the Chicago Bulls. Holiday recorded 25 points, nine rebounds and three steals on Sunday.