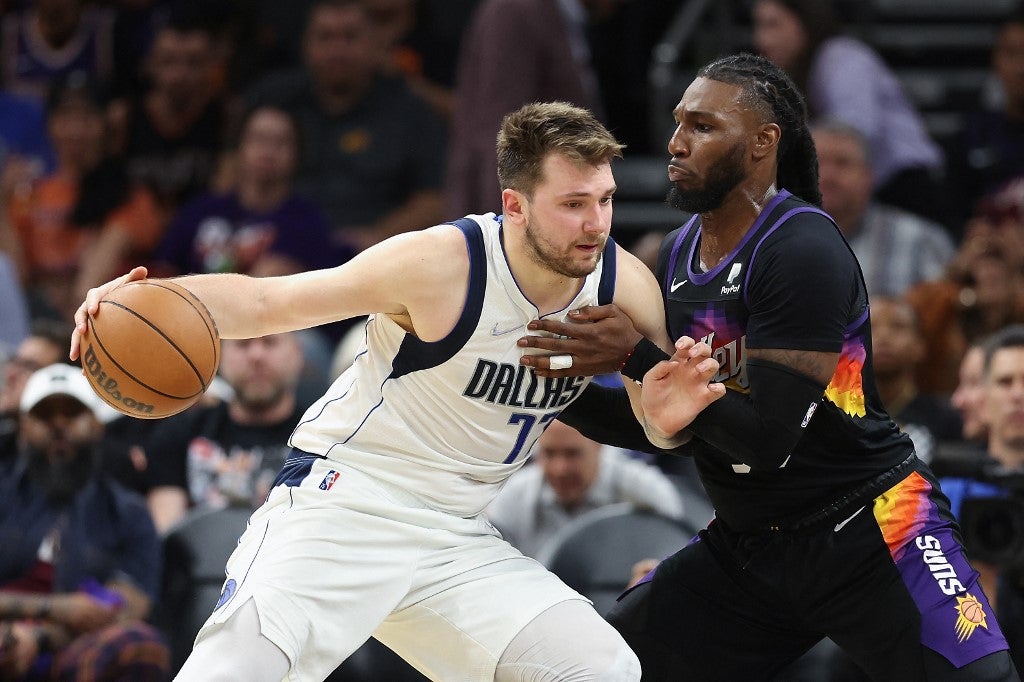 Luka Doncic #77 of the Dallas Mavericks handles the ball against Jae Crowder #99 of the Phoenix Suns during the second half of Game One of the Western Conference Second Round NBA Playoffs at Footprint Center on May 02, 2022 in Phoenix, Arizona. Christian Petersen/Getty Images/AFP

Luka Doncic put on a show in Game 1 but not enough of his Dallas Mavericks’ teammates joined him on stage.

Doncic will look to make Act 2 better than the first when the Mavericks visit the Phoenix Suns on Wednesday night, looking to knot the Western Conference semifinal set at a game apiece.

Doncic recorded 45 points, 12 rebounds and eight assists in Monday’s 121-114 road loss. It was a game Dallas never led and trailed by as many as 21 before staging a frantic fourth-quarter comeback that made the score respectable.

The major problem was that Doncic was a one-man ensemble. He scored more points by himself than the rest of the Mavericks’ starters combined (39).

“He got whatever he wanted, when you look at the shots in the paint, behind the arc, midrange, and then also I thought he got his teammates some great looks that we normally had made,” Dallas coach Jason Kidd said afterward. “I thought he played great.

“We’ve just got to get someone to join the party.”

Among the players on the invitation list are starter Jalen Brunson and reserve Spencer Dinwiddie.

Brunson, who averaged 27.8 points in the first round against the Utah Jazz, was just 6-of-16 shooting and scored 13 points. Dinwiddie averaged 15.3 points against Utah but had just eight in the opener against Phoenix.

Doncic said he felt Dallas didn’t attack the inside enough — the area where dominant Suns center Deandre Ayton hangs out — and didn’t do a good job making things tough for the potent Phoenix offense.

“I think our defense lost us the game,” Doncic said. “Our start on the defensive end was terrible, and we’ve got to change that. I know we can play way better defense.” Devin Booker #1 of the Phoenix Suns handles the ball against Reggie Bullock #25 of the Dallas Mavericks during the second half of Game One of the Western Conference Second Round NBA Playoffs at Footprint Center on May 02, 2022 in Phoenix, Arizona.  Christian Petersen/Getty Images/AFP

Booker is struggling to regain his shooting stroke after missing three games in the first-round series against the New Orleans Pelicans due to a right hamstring injury.

Booker was just 7-of-20 shooting in Game 1 versus the Mavericks after having 13 points on 5-of-12 shooting in the final game against the Pelicans.

Chris Paul contributed 19 points but was less than thrilled that Phoenix’s lead of 106-85 with 8:48 remaining was whittled down to five before the club held off the Mavericks.

“We’ll take the win,” Paul said. “It’s not always going to be pretty. We played well most of the game. We’ll look at the film and see what we need to do differently for Game 2.”

Phoenix will certainly do a thorough investigation of what it can do to limit Doncic’s output.

The 23-year-old superstar raised his career playoff average to 33.4 points in just 17 games. The mixing and matching of defenders on him in Game 1 didn’t lasso him in the least.

That means Suns coach Monty Williams will look to dig deeper into the bag of tracks for Game 2.

“Anytime a guy has 45, you look at that number and you don’t like it, but I look at their assist numbers,” Williams said. “They only had 16. So, (Maxi) Kleber hit some 3s, but for the most part, nobody else got going the way that they’re capable of.”

Phoenix made 11 of 28 from behind the arc but stepped up big at the free-throw line, making all 18 attempts. The Suns were 8 of 8 in the final 47.3 seconds to thwart the Dallas comeback bid.