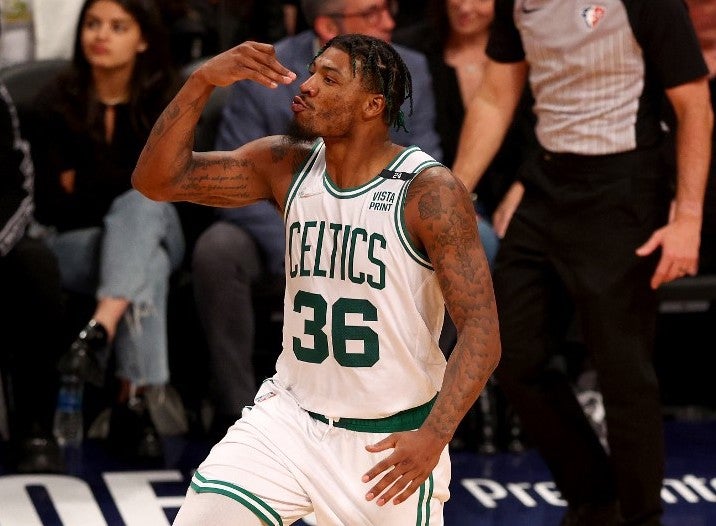 Marcus Smart #36 of the Boston Celtics celebrates during Game Four of the Eastern Conference First Round Playoffs against the Brooklyn Nets at Barclays Center on April 25, 2022 in the Brooklyn, New York City. Elsa/Getty Images/AFP

The Boston Celtics could have reinforcements as they seek to keep the pressure on Giannis Antetokounmpo and the NBA champion Milwaukee Bucks in game three of their Eastern Conference playoff series.

Defensive player of the year Marcus Smart, who missed the Celtics’ game two victory in Boston that knotted the best-of-seven set at one game apiece, said Thursday there was “a strong likelihood I should be back” after sitting out with a painful right quadriceps contusion suffered in Boston’s game-one defeat.

Smart said the bruising near his knee had also led to swelling that restricted his range of motion, the main reason he was unable to play.

He was optimistic he’d be ready to go when the series resumes on Saturday in Milwaukee.

“Once we can get the fluid off of it, everything else will be all right.”

Smart said missing game two, with his team down a game, was a nerve-wracking experience.

“It’s really tough, and my guys know, anybody who knows me understands that if I’m gonna miss a game, especially a playoff game, something’s really got to be wrong with me.”

But he was delighted to see his teammates step up, with Jaylen Brown and Jayson Tatum combining for 59 points in a 109-86 rout of the Bucks.

“We came out flat the first game and give all credit to the Bucks, they did what they were supposed to do, and us going on home court we couldn’t go down 0-2,” he said. “I’m just proud of the way the guys responded, and I’m glad that everybody had a helping hand in that and stepped up.”

Even without Smart, the Bucks did an impressive job defending two-time MVP Antetokounmpo in game two.

The Greek star has averaged 26 points, 11 rebounds and 9.5 assists over the first two games, but hasn’t had the luxury of easy shots.

“You’ve got to give their defenders credit,” Milwaukee coach Mike Budenholzer said. “But Giannis, he always figures things out.”

The Memphis Grizzlies also bounced back from a game-one defeat to level their Western Conference series against Golden State going into a Saturday game three in which no love will be lost between the teams.

Payton is out at least two weeks with a broken elbow and ligament and muscle injuries while Brooks is suspended for game three.

The other two second-round series resume on Friday with the Phoenix Suns, holders of the best regular season record in the league, holding a 2-0 lead over the Dallas Mavericks and the East’s top-seeded Miami Heat 2-0 up on the Philadelphia 76ers.

The 76ers head home for games three and four amid continuing uncertainty over the return of star center Joel Embiid, who is recovering from a concussion and orbital fracture.

Sixers coach Doc Rivers admitted the team could only “wait and see” when the MVP candidate might clear concussion protocols.