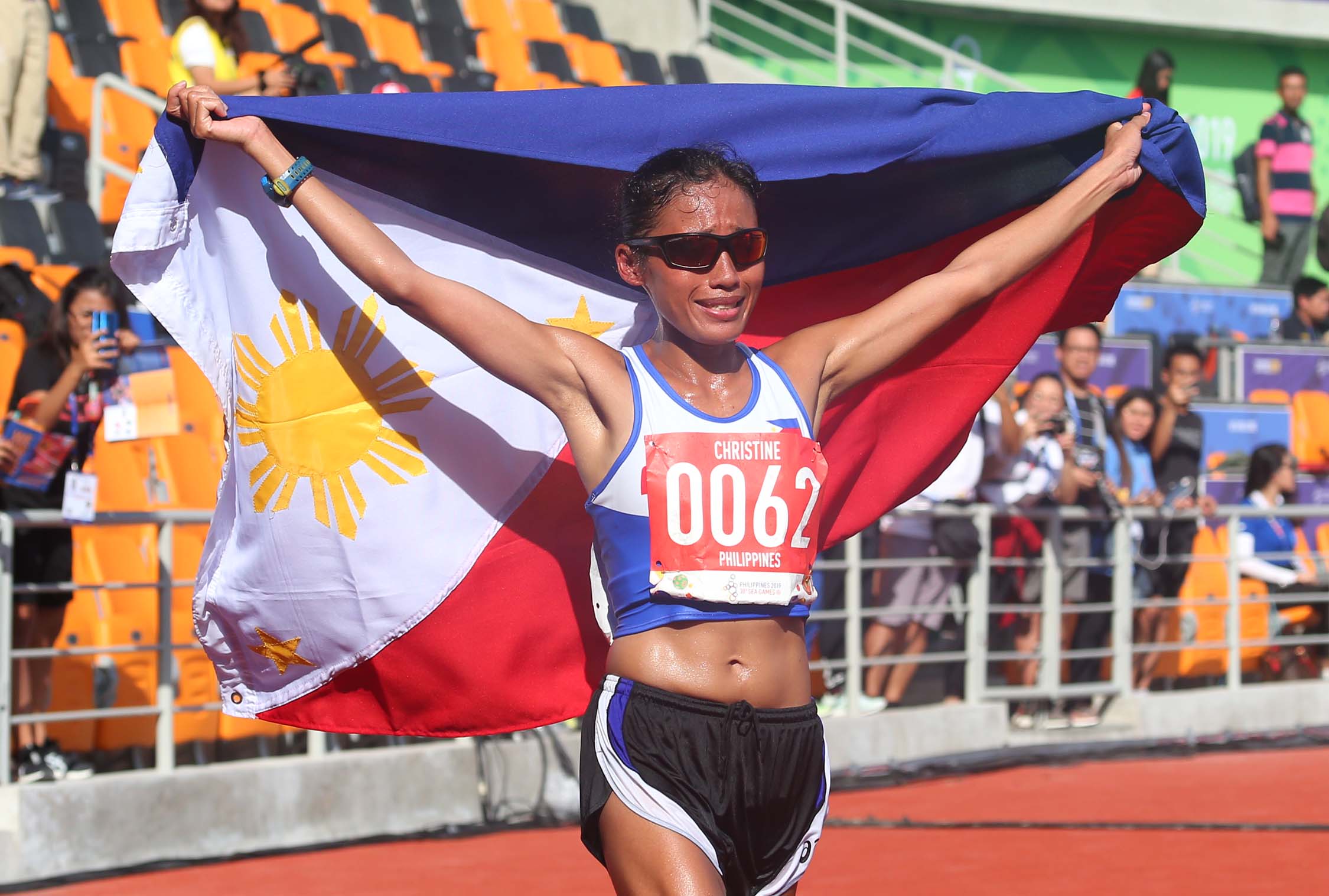 Christine Hallasgo wants to relive the emotions of winning a gold for the country. —MARIANNE BERMUDEZ

A lot of eyes may be on EJ Obiena when the country’s athletics team shoots for gold in the 31st Southeast Asian (SEA) Games in Vietnam.

But the Philippine Athletics Track and Field Association has assembled a gem-studded roster out to grab their share of the spotlight.

Christine Hallasgo, for one, is the defending SEA Games women’s marathon champion. And unlike in 2019 when she came out of nowhere to upend fancied teammate Mary Joy Tabal for the gold medal, Hallasgo admits that she will be running against a field that will mark her as its target.

“I feel a bit of pressure because I was the previous gold medalist. All eyes are on me,” Hallasgo told the Inquirer in Filipino.

“I can’t say if I will be able to defend my title because everyone is aiming for this. But all I can assure is I am a fighter,” she added.

William Morrison is also out to defend his shot put gold medal, but the pressure is less—mainly because of the guy who he expects will challenge him for the gold.

“Probably my own teammate, Albert [Mantua]. We’ve been going pretty hard in practice and stuff,” Morrison told the Inquirer.

“He’s been doing really good. I really love having somebody who is improving everyday, getting better everyday with me. Definitely better than practicing by yourself,” he added.

Unlike Hallasgo and Morrison, Alexie Caimoso is not the defending champion of her event, heptathlon. Her teammate, Sarah Dequinan, is.

But Caimoso is hoping to use the Vietnam staging of the SEA Games as a platform to introduce herself to a wider audience.

“I’m both excited and nervous at the same time. Excited because I always wanted to compete in the SEA Games and now, I’m given a chance to compete,” Caimoso told the Inquirer. “I’m just really hoping that I could do good and perform good and probably bring on pride to our country.”

But Caimoso isn’t just out to gain international experience. She is a medal hopeful, too, judging from her latest personal record of 5,032 points, which she collected this year. For context, Dequinan won the gold in 2019 by totaling 5,101 points.Hallasgo said the athletics squad will face one disadvantage in Vietnam: They didn’t get a chance to train as much as other countries.

But the marathoner from Bukidnon swears she and her teammates made the most of their Baguio camp.

“Rain or shine, we train. No excuses, whatever the weather conditions are here in Baguio,” said Hallasgo.

“I want to feel that moment again—winning the gold and waving the Philippine flag in the SEA Games,” she said.

Morrison also wants to win the gold for the country. And, if possible, the silver too.

“[I]t’s gonna be cool to see the Philippines go one and two in shot put,” he said.