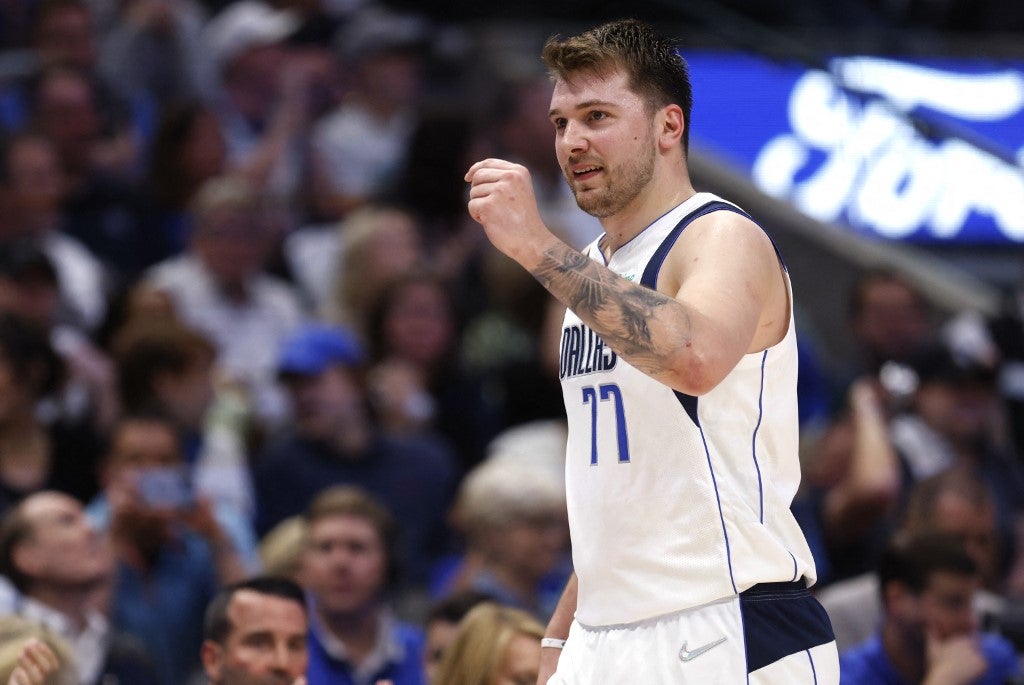 Luka Doncic #77 of the Dallas Mavericks reacts after scoring against the Phoenix Suns during the second half of Game Three of the 2022 NBA Playoffs Western Conference Semifinals at American Airlines Center on May 6, 2022 in Dallas, Texas. Ron Jenkins/Getty Images/AFP

Doncic finished with 26 points, 13 rebounds and nine assists for fourth-seeded Dallas, which sliced top-seeded Phoenix’s lead to 2-1 in the best-of-seven Western Conference semifinal.

Game 4 of the series is Sunday in Dallas.

The Mavericks also got 15 points from Reggie Bullock plus 14 each from Dorian Finney-Smith and Maxi Kleber. While Doncic had his lowest-scoring game of the series — he averaged 40 in the two losses at Phoenix — Dallas had more of the balance coach Jason Kidd said was required to beat the Suns.

The Mavericks also came up big on defense. Phoenix hit just 44.7 percent from the field, the first time in nine postseason games it was held under 50 percent. The Suns also coughed up 17 turnovers, their highest figure in the playoffs this year.

Dallas made only 44.4 percent of its shots but committed just eight turnovers.

The Mavericks avoided falling into a 9-0 hole at the start, the deficit they faced in each of the series’ first two games. Instead, Dallas rattled off a 19-3 spurt for a 26-16 lead on Doncic’s layup with 1:44 left in the first quarter. The hosts held a 29-20 edge entering the second.

Meanwhile, Phoenix was its worst enemy at times. The Suns shot well but harmed themselves with turnovers. Paul committed seven in the first half, while Dallas didn’t have a turnover until Doncic was whistled for an offensive foul on its final possession of the half.

Ahead 51-44 at halftime, the Mavericks gained more separation in the third quarter. They started the period with a 20-9 run for a 71-53 advantage at the six-minute mark on Kleber’s pullup jumper and took an 82-67 cushion into the final 12 minutes.