Maroons shoot down Eagles for second time this season 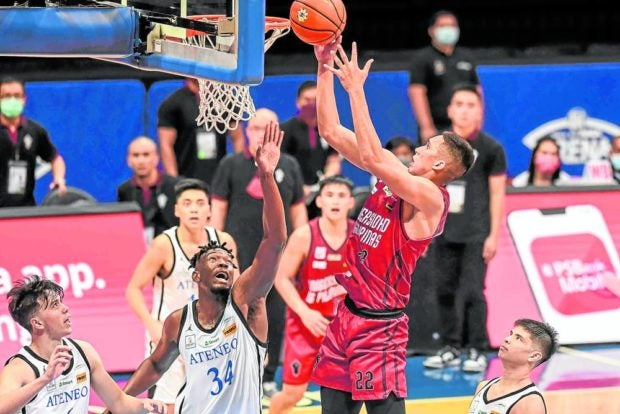 Zavier Lucero scores easily in this bit of play before he celebrates with James Spencer (right, photo below) after a key play in overtime. —UAAP MEDIA

University of the Philippines stared down the inevitability of Ateneo’s fourth straight championship and found itself peering at the possibility of a first title in close to four decades.

The Maroons, flaunting the same doggedness that allowed them to sail through a stormy semifinal test, stunned the defending champion Blue Eagles, 81-74, in Game 1 of the UAAP men’s basketball finals on Sunday at Mall of Asia Arena.

Ricci Rivero completed a clutch three-point play while James Spencer drained the second of his two huge triples for the night in overtime as the Maroons scored 21 of the game’s last 27 points after being down eight with less than five minutes remaining in regulation.

“Our team has gone through a lot of ups and downs,” UP coach Goldwyn Monteverde said after the match.

“But we just kept reminding each other not to give up. Try to be consistent in the game and keep on fighting until the final buzzer,” he added.

Now, the Maroons have shoved the Blue Eagles into a situation they are completely unfamiliar with: Their backs against the wall with a chance for UP to end a 36-year title drought in Game 2 on Wednesday.

“Well, we have a 1-0 lead but it doesn’t mean anything,” Monteverde said. “We still need to look at what happened in the game and find ways to improve.”

He doesn’t need to dig too deep into the tapes to check for ways to play better.

At one point, it was easy to chalk up a win for the Blue Eagles after Ange Kouame hit a basket and Raffy Verano plucked an offensive rebound and scored on a putback that pushed the Maroons into a 60-68 hole, 4:35 to play.

This was, after all, exactly the kind of situation where Ateneo is known to run an assassin’s blade across the jugular. But this was also around the same time just two nights ago when UP began overhauling a 14-point deficit to drag a befuddled La Salle out of the semifinals.

Zavier Lucero footed the bulk of the comeback duties, draining seven points against a lone Verano jumper to put the Maroons within 67-70. And then, quite uncharacteristically, Ateneo lost the kind of machine-like efficiency that had marked its run to the Finals, where the Eagles were looking to notch a fourth straight crown.

Ateneo committed 26 turnovers for the night, which UP translated into 26 points.

Gian Mamuyac and Kouame combined for one of those errors-to-points sequences, with the Ateneo skipper throwing an inbounds pass that his 6-foot-10 teammate lost to the sidelines. That led to Spencer nailing a three-pointer from at least two steps behind the arc to knot the count at 70 with 24 seconds remaining in the fourth.

“Honestly, I was just thinking that my shot was feeling good and if no one was going to be near me, I was just going to let it fly,” Spencer said.

The Maroons’ defense protected the tied count until the final buzzer. And in overtime, their defense went into overdrive.

UP held Ateneo to just four points in the extra period as Spencer, Rivero and Carl Tamayo made the Eagles pay for every missed chance and every fumble.

“We knew what a great team Ateneo is offensively so we just locked in on defense as a team,” said Lucero.

Despite shooting poorly, the Maroons dug into their locker rooms at halftime slightly ahead, 32-31, after two periods of what seems like a battle of attrition.

UP shot just a shade above 26 percent and had eight turnovers while making just 10 field goals in the first half. Ateneo was only slightly better from the floor, making 12 of 35 attempts from the floor but committing nine turnovers before the break.

The Maroons scored nine points off those turnovers—a portent, it turned out, of what was to come.