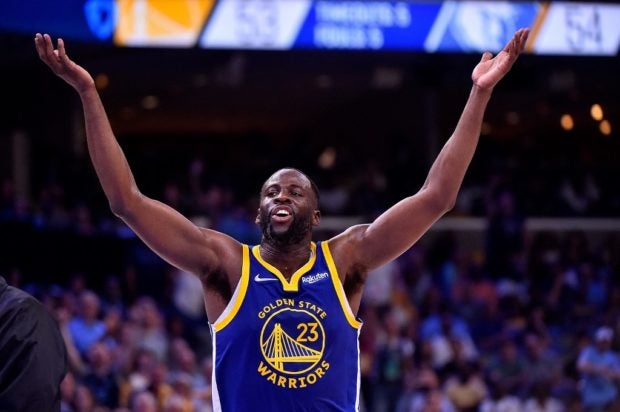 Draymond Green of the Golden State Warriors reacts after being ejected during Game One of the Western Conference Semifinals of the NBA Playoffs against the Memphis Grizzlies at FedExForum on May 01, 2022 in Memphis, Tennessee.  (Getty Images via AFP)

Golden State forward Draymond Green said the Warriors are playing a Memphis team that is different than the one they prepared for now that Grizzlies guard Ja Morant is out and need to refresh their game plan after being blown out on Wednesday.

The Grizzlies cut the Warriors lead in the best-of-seven series to 3-2 after embarrassing the visitors 134-95 in Game Five in Memphis.

“I don’t think it is anything for us to panic about,” Green said on his podcast, the Draymond Green Show, after the game.

“We’re going back home, we want to get the home crowd into it. And come out and put your hard hats on. That’s what we’ve got to do.”

Explosive All-Star guard Morant was the Grizzlies primary scoring option against the Warriors but went down with a knee injury late in Game Three and the team has said he is doubtful to return this post-season.

The young Grizzlies squad had a 20-5 record without Morant this season and have done a better job rebounding and scoring in the paint against the Warriors in his absence.

The Warriors committed and unsightly 22 turnovers and gave up 18 offensive rebounds on Wednesday to the Grizzlies, who will look to force a Game Seven on their home court when they visit Chase Center on Friday.

“We go back to the drawing board,” Green said.

“Travel day tomorrow, shootaround on Friday, put in our adjustments and get ready for Game Six.

“Nobody said it would be easy.”