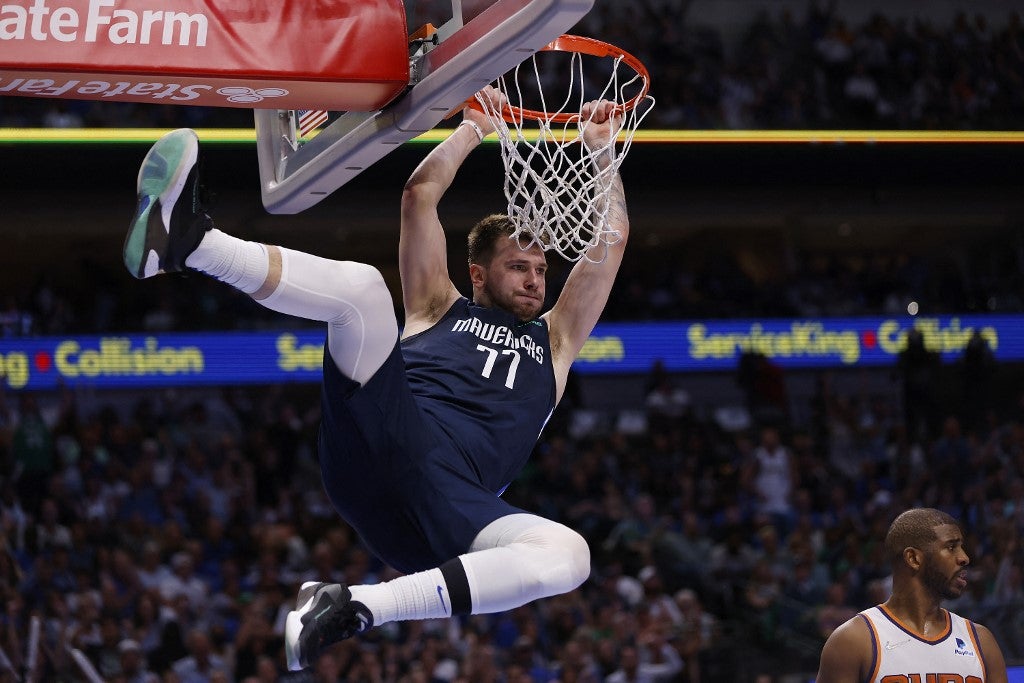 Luka Doncic #77 of the Dallas Mavericks dunks the ball against the Phoenix Suns in the third quarter of Game Six of the 2022 NBA Playoffs Western Conference Semifinals at American Airlines Center on May 12, 2022 in Dallas, Texas. Ron Jenkins/Getty Images/AFP

Reggie Bullock made five 3-pointers while contributing 19 points and seven rebounds for Dallas. Jalen Brunson added 18 points for the fourth-seeded Mavericks, who outscored Phoenix by 24 points over the final three quarters of the easy Game 6 win.

Deandre Ayton registered 21 points and 11 rebounds and Devin Booker added 19 points on just 6-of-17 shooting for the top-seeded Suns. Chris Paul had 13 points but committed five turnovers while handing out just four assists.

The decisive Game 7 will be played Sunday in Phoenix. The home team has won all six games in the series.

Luka muscles into the paint for his 33rd point of the night!#NBAPlayoffs presented by Google Pixel on ESPN pic.twitter.com/QZLWtYt5RD

Doncic scored 11 first-quarter points to get the Mavericks started. He topped 30 points for the third time in the series and has tallied more than 25 in all six games.

Dallas committed just two turnovers over the first three quarters and finished with seven. The Suns had 22 turnovers, eight of them by Booker.

Spencer Dinwiddie added 15 points on five 3-pointers for the Mavericks, who have won their three home games in the series by an average of 15.3 points.

Dallas shot 45.5 percent from the field, including 16 of 39 (41 percent) from 3-point range. Frank Ntilikina had four steals and Brunson had three as the Mavericks accumulated 16 overall.

He's up to 28 points for the @dallasmavs and we're not even through the 3rd quarter 🔥#NBAPlayoffs presented by Google Pixel on ESPN pic.twitter.com/ZTEPJOufNU

Phoenix trailed 39-37 after Bismack Biyombo’s inside hoop with 8:21 left in the first half before Dallas erupted.

The Mavericks scored the next eight points to move ahead by 10. Later in the half, Maxi Kleber and Bullock hit consecutive 3-pointers to make it a 17-point margin before Dallas settled for a 60-45 halftime lead.

The Suns moved within 100-84 on Paul’s 3-pointer with 5:16 remaining, but Doncic answered with back-to-back baskets as the Mavericks put the finishing touches on the rout with a 13-2 game-ending spurt.