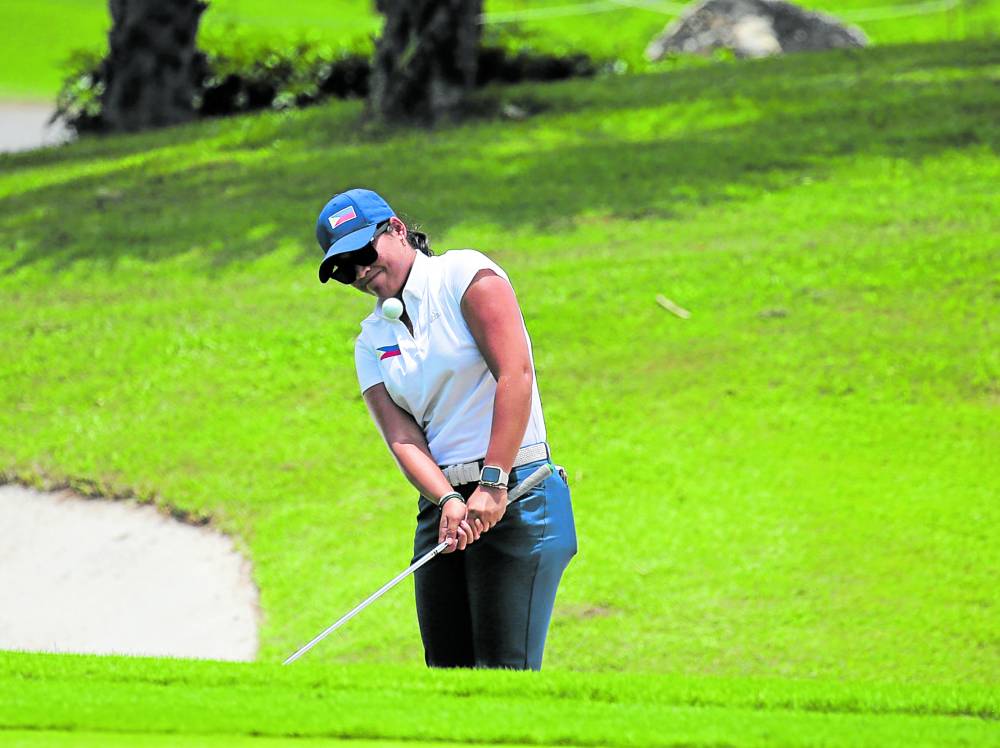 Mafy Singson keeps herself in contention for a medal. —CONTRIBUTED PHOTO

HANOI—It was all about giving themselves a good chance, and Lois Kaye Go and Mafy Singson just didn’t like the idea of playing in the final round as mere also-rans.

Go and Singson made the right adjustments from their first round struggles as both cracked par to keep themselves in the hunt for a podium finish even as the gold medal may have been won a day early by an unrelenting Thai ace in the 31st Southeast Asian Games golf competitions at the challenging Heron Lake Golf Course and Resort here.

Go submitted a three-under-par 69 on Saturday that bettered her opening day effort by seven strokes, racking up three straight birdies late in her round to jump into solo sixth with a 146 total, just three behind the third-running Jeneath Wong of Malaysia (142) and four adrift of Eila Galitsky of Thailand, who was in second place at 141.

Natthakritta Vongtaveelap, though, appears to have sewn up the gold medal for Thailand with her second straight 67, pulling away in the back nine with a five-under effort in a five-hole stretch that saw her gun down three birdies and an eagle that followed a rare double-bogey miscue on the ninth. She ended the day taking a commanding seven-stroke lead over her teammate Galitsky.

“I played pretty solid out there overall and I’m happy on how today went,” said Go, who mixed six birdies with three bogeys. “I was able to visualize my shots and was able to execute them well.”

“Coming into [the final round], I’ll play with no expectations and just go out there have fun and play my game,” the pro-bound Go went on. “I have to keep trusting myself, build my confidence up and not let any negative thoughts get into my head.”

Singson was already one-over after 12 holes but picked up three birdies on her last six holes to also keep herself in the running for a medal in her national team debut. Rianne Malixi, meanwhile, was virtually out of it after falling far behind with a lackluster 74 that pulled her further down to a tie for 12th at 150.

The men’s division bets will need a miracle to salvage a medal as another day of low-scoring sent the front-runners streaking ahead.

Jet Hernandez was able to boost his drive with three birdies on his first six holes, but failed to keep the momentum and ended his round with a double-bogey to settle for an even-par 72.

He was the best-placed Filipino in the standings, tied for 14th at 146, eight shots behind solo leader Arsit Areephun of Thailand and six off joint second placers Weerawish Narkprachar of Thailand and Ervin Chang of Malaysia.

“Today’s round was way better than yesterday and I really thought that I achieved my goal of two under until I made that double bogey on the 18th. There’s still one more day and hopefully we’ll go low tomorrow,” said Hernandez.