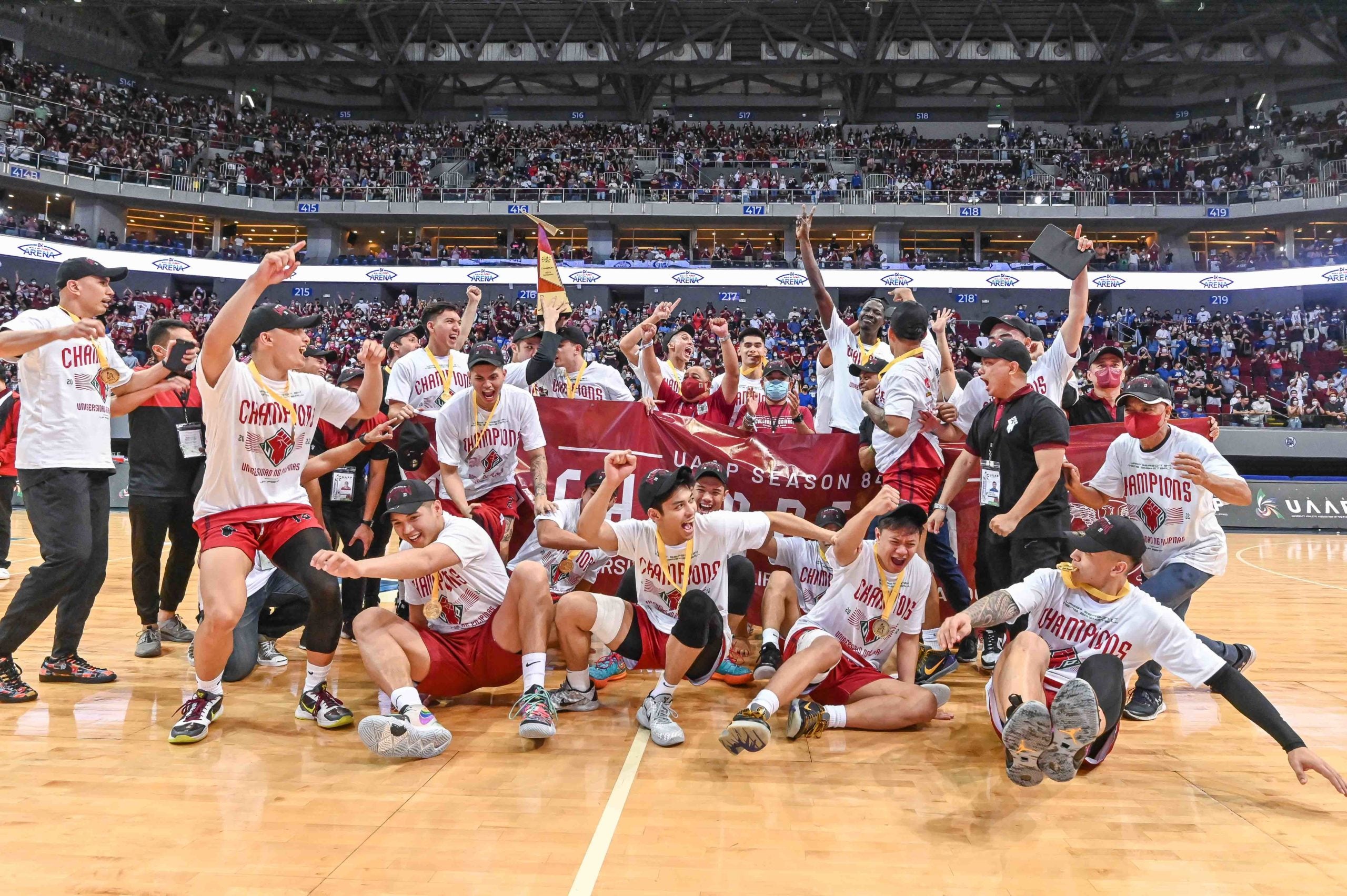 The UP Maroons rush to center court to frame their moment of triumph for posterity. —PHOTOS COURTESY OF UAAP MEDIA

MANILA, Philippines — University of the Philippines coach Goldwin Monteverde is extremely proud how the never-say-die Fighting Maroons thrived to end the school’s 36-year UAAP title drought in these trying times.

UP put an end to Ateneo’s three-season reign with JD Cagulangan hitting the championship-clinching triple to complete a dramatic come-from-behind 72-69 win in overtime of the Game Three of UAAP Season 84 men’s basketball finals.

The Fighting Maroons, who were led by Cagulangan, Finals MVP Malick Diouf, Season 84 top rookie Carl Tamayo, Ricci Rivero and CJ Cansino, made history by winning the school’s third title in these unprecedented times under a bubble environment with a

“We’re in an unprecedented season. The players need to play and practice every other day, in between games. They sacrificed a lot since December, being away from their families because of our bubble training,” said Monteverde after delivering UP’s first crown since 1986 in right in his first season as head coach.

“To be able to endure this kind of situation at their age is really tremendous for me. I’m really, really proud of what we achieved for this season,” he added.

Coming off their mentally-challenging bubble training that started December last year, the Fighting Maroons started the season on the wrong foot, losing to the Blue Eagles on opening day. But they averted their slow start and went on an eight-game win streak — their most consecutive wins since 2004 — behind the emergence of Zavier Lucero as top two statistical leader in the first round

It was snapped by Adamson but Monteverde used that setback as a wake up call and still finished the elimination at second place, ending Ateneo’s 39-game win streak to halt its flight for an outright finals and shift the postseason to a regular Final Four format.

UP squandered a twice-to-beat advantage losing the first game to La Salle but it didn’t stop it from crawling its way to the finals after Tamayo’s heroics in the do-or-die semifinals game erased a 14-point fourth quarter deficit to set a Finals date with Ateneo.

For every game, win or lose, Monteverde stressed to his wards to keep on learning regardless of the outcome.

From all those matches including their last three wins in come-from-behind fashion, the multi-titled high school coach believes the Maroons biggest learning in the season is to never give up that they can also apply in life outside basketball.

“I guess ‘dealing with pressure… If you make the right choices in those kinds of situations, you’ll (succeed) if you don’t give up,” he said. “This doesn’t apply only in basketball. We can take our learnings after this season and apply it in life.”

Monteverde, the only coach who has a winning 3-2 record against Ateneo’s Tab Baldwin in the UAAP, may be a soft-spoken person. But his heart is screaming how proud he is for the Fighting Maroons for defying the odds.

“There’s no words to express what I’m feeling right now. Sometimes I’m like this, out of words. But deep inside my heart. I am so happy,” he said.