NBA: Jimmy Butler pours in 41 as Heat down Celtics in Game 1 | Inquirer Sports

NBA: Jimmy Butler pours in 41 as Heat down Celtics in Game 1 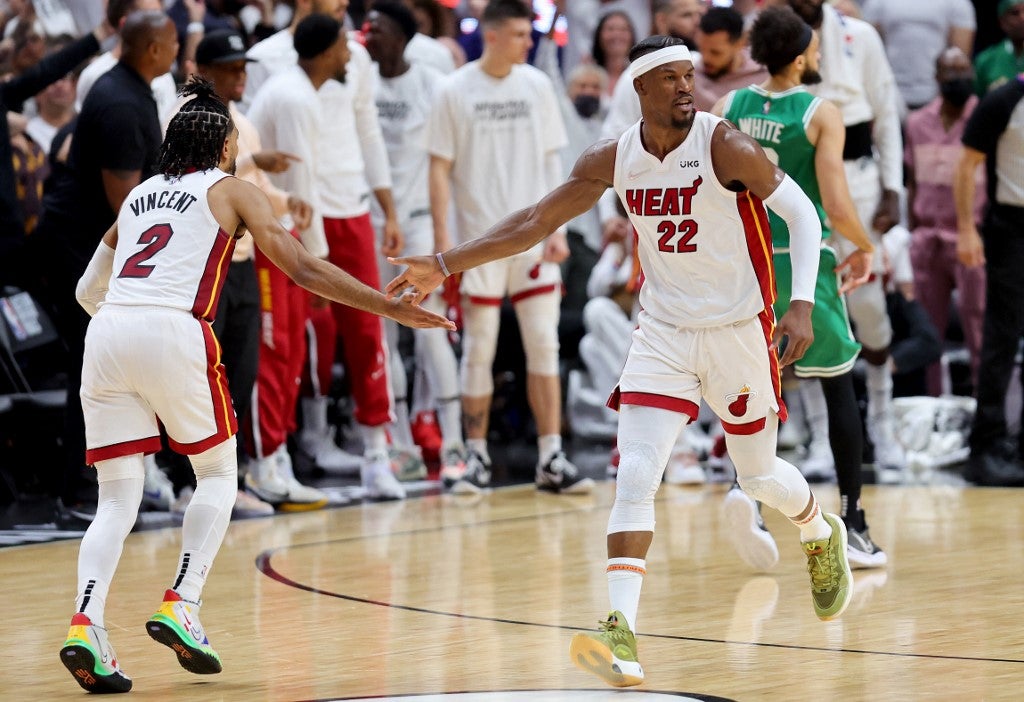 Jimmy Butler #22 of the Miami Heat celebrates a basket with Gabe Vincent #2 against the Boston Celtics during the third quarter in Game One of the 2022 NBA Playoffs Eastern Conference Finals at FTX Arena on May 17, 2022 in Miami, Florida. Michael Reaves/Getty Images/AFP

Jimmy Butler was pegged to play a co-starring role with Boston’s Jayson Tatum in the Eastern Conference finals, but the Miami Heat standout reconstructed the projections into a one-hero script in Game 1.

One day after signaling Tatum was the type of player he wants to compete against, Butler stole the show. He scored 17 of his 41 points in an epic third-quarter uprising to help the host Heat rally for a 118-107 victory over the Celtics in the series opener on Tuesday night.

“MVP Jimmy did his thing,” Heat guard Tyler Herro said. “He put us on his back tonight. We’ll need other guys to step up throughout the series to help Jimmy.”

Game 2 is Thursday night in Miami.

"I think it's a blessing to play basketball at the highest level… I enjoy going to battle with the guys that I got." –@JimmyButler pic.twitter.com/8hZ4PUJ9iI

The 40-point effort was Butler’s fifth in the postseason during his three-season tenure with the Heat. The only player with more is franchise icon Dwyane Wade with seven.

“I know what I’m capable of, I don’t do this to score 40 points,” Butler said of his third 40-point outing of this postseason. “I play the way I play to win by all means necessary and it just so happened that I score 40. If I score 40 and lose, I’ll be pretty (ticked) off.”

Miami coach Erik Spoelstra said Butler stepped up under the lights of the conference finals showcase.

“This competition is high level and he senses it,” Spoelstra said. “He knows it and feels it and he was able to produce to feel comfortable that we could win this game tonight.”

"He's competing to win… and he does that as well as anybody in this league."

The Heat turned the game around by outscoring Boston 39-14 in the third quarter to seize a 93-76 lead entering the final stanza.

“I had too many turnovers,” Tatum said. “I have to be better in those situations. I’ve got to take care of the ball better.”

The Heat were without Kyle Lowry (left hamstring) for the seventh time in the past nine games.

Max Strus scored 11 points and Bam Adebayo added 10 points and four blocked shots for Miami. The Heat shot 48.8 percent from the field, including 10 of 30 from 3-point range.

The @MiamiHEAT lead 1-0 in the Eastern Conference Finals. pic.twitter.com/rJTEZAxzCJ

Miami opened the third quarter with a 22-2 burst to turn an eight-point halftime deficit into a 76-64 lead. Boston didn’t make a field goal for the first 7:07 of the period.

After the Celtics scored nine straight points to move within three, the Heat finished the quarter with a 17-3 surge to hold the 17-point edge. Boston shot just 13.3 percent (2 of 15) from the field in the period.

“It flipped pretty quickly,” Celtics coach Ime Udoka said. “We lost our composure — 39-14 on 2-of-15 (shooting) is tough to overcome. We had one poor quarter that hurt us. It’s disappointing we came out as flat as we did.”

Herro was fouled while shooting a 3-pointer and made all three free throws to give Miami a 96-76 lead with 10:45 left in the contest. Boston answered with 10 straight points and pulled within 96-86 on two free throws by Grant Williams with 8:21 remaining.

Two free throws by Vincent and a layup by Butler clinched it for Miami.

Tatum scored 21 first-half points as Boston held a 62-54 lead at the break. The Celtics shot a torrid 59.1 percent from the field in the half. Miami shot 48.8 percent.

“I think we kind of went away from what was working,” Tatum said. “That’s something we have to be aware of Thursday.”