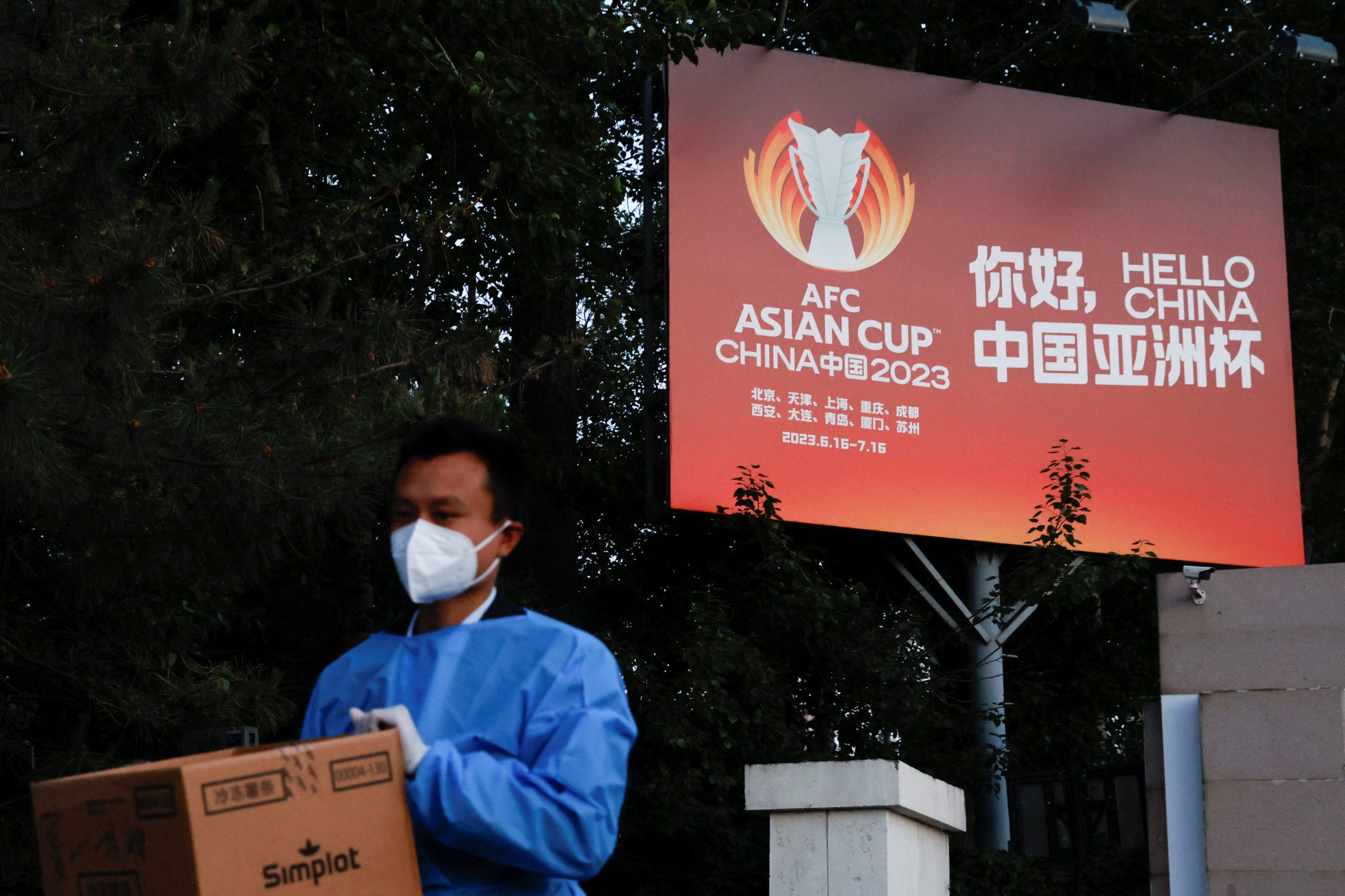 FILE PHOTO: A man wearing personal protective equipment (PPE) walks past a billboard of the AFC Asian Cup, as he walks out from a makeshift nucleic acid testing site amid the coronavirus disease (COVID-19) outbreak in Beijing, China May 14, 2022. REUTERS/Carlos Garcia Rawlins

The Asian Football Confederation (AFC) announced last Saturday that China had pulled out of hosting the 24-team continental championship, citing the COVID-19 situation in the country.

“We were sounded out,” Tashima told the newspaper, without giving further details.

“If Japan were able to host, there’s no question that it would be pretty exciting.”

Japan has the stadium infrastructure in place to stage the tournament in June and July next year, having co-hosted the World Cup in 2002, rugby’s global showpiece in 2019 and the Olympic football tournament last year.

Other potential hosts such as Qatar, Saudi Arabia and Australia would need the tournament moved back to late 2023 or early 2024.

Qatar, which will host the World Cup later this year, and Saudi Arabia would be inhospitable in the middle of the year because of the summer heat, while Australia is co-hosting the women’s World Cup in July and August 2023.

Last year’s Tokyo Olympics were held in a bio-secure bubble with limited local crowds because of fears of athletes and officials spreading the novel coronavirus.

Japan said on Tuesday, however, that it would start conducting “test tourism” in the form of limited package tours in May as a way of gathering information prior to a full re-opening of the country to tourism.

Tourists have not been permitted to enter Japan since the country adopted strict border controls in 2020 at the start of the pandemic.

Japan has won the Asian Cup a record four times and previously hosted the tournament in 1992, when only eight teams took part.

A South Korea FA official said they had a “briefing” after China relinquished the hosting rights but there was not enough time to deliver a world-class tournament in the country.

“When we applied for the 2023 Asian Cup years back, we had quite some time but this Asian Cup is happening just next year and this can’t be just happening in a top-down way,” the official said, declining to be named.

“It’s just the schedule is so tight now.

“I mean if the AFC just lets us host it without any conditions, we’ll do it, but we don’t know what conditions there are to host the Asian Cup and whether we can meet the standard…”

The AFC, which has not responded to requests for information about the process of replacing the host country, is meeting for its 32nd Congress in Kuala Lumpur later on Wednesday.