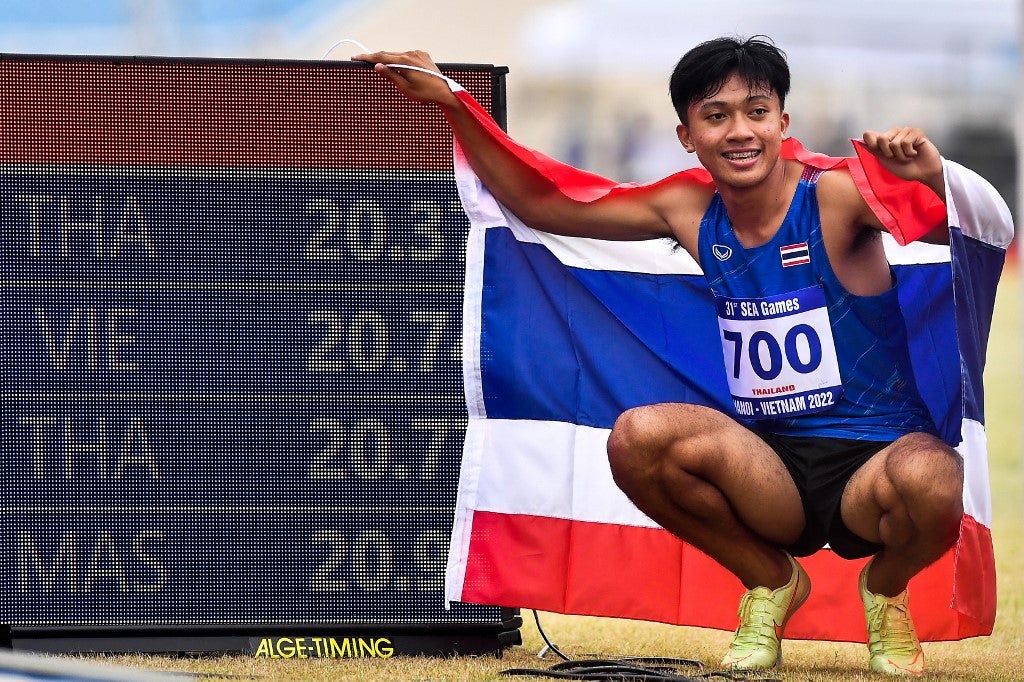 Thailand’s Puripol Boonson celebrates with his time after winning the gold medal in the men’s 200m race during the athletics events at the 31st Southeast Asian Games (SEA Games) in Hanoi on May 14, 2022. (Photo by Ye Aung Thu / AFP)

Thai teenager Puripol Boonson destroyed the opposition to win the men’s 100m in 10.44secs at the 31st SEA Games on Wednesday and grab a sprint double in Hanoi.

Kayla Anise Richardson of the Philippines won the women’s 100m to add to 200m bronze in the Vietnamese capital.

But the night belonged to wonder kid Puripol, 16, who easily beat the rest of the field to silence the almost wholly local crowd at My Dinh stadium.

“Before the competition I was under a lot of pressure… but I made it and I’m very glad,” he told reporters.

The teenager had already made headlines at the regional showpiece after twice breaking the Games record in the 200m, his best time of 20.37secs bringing gold.

“My target for this year is that I will try to consistently improve my record and break my own record,” Puripol said.

He finished ahead of Thai teammate Soraoat Dapbang, who took silver, with Singapore’s Marc Brian Louis in bronze.

Richardson found herself nearly neck-and-neck with her rivals as she crossed the finish line in 11.60secs to win women’s gold, a mere 0.02secs in front of Singapore’s Veronica Shanti Pereira.

She eclipsed her performance when winning gold at the 2015 SEA Games, then clocking in at 11.76secs, and called Wednesday’s triumph a “little personal victory”.

“Just to be able to put it together for today feels amazing, I’m so grateful. I’ve such a great support system. I’m just so happy,” the 24-year-old said.

Her bronze in the 200m came behind twin sister Kyla in silver, with Pereira taking gold. Philippines’ Kayla Richardson (C) competes in the women’s 100m final in the 31st Southeast Asian Games (SEA Games) at My Dinh National Stadium in Hanoi on May 18, 2022. (Photo by Ye Aung Thu / AFP)

Richardson, who holds dual citizenship in both the Philippines and the United States, said she was going to try and qualify for the World Athletics Championships in July.

The sprinter’s main goal though is the Paris 2024 Olympics.

“2024 is definitely a goldmine, it’s reachable for both me and my sister so that’s definitely something that I’m keeping in mind throughout all these seasons coming up,” she said.

Coming on the heels of Puripol’s sprint success, Thailand’s badminton players also demolished the opposition in the men’s and women’s team finals.

In the women’s they crushed Indonesia 3-0 while the men defeated Malaysia by the same scoreline.

That gave Thailand 53 gold and they sit second in the medals table ahead of the Philippines on 37.

Hosts Vietnam are way out in front with 126 golds.