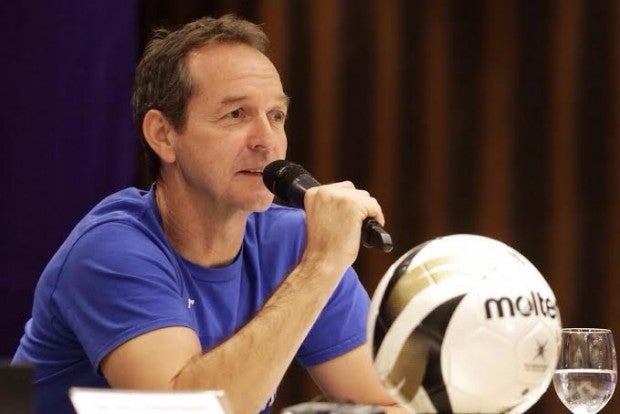 MANILA, Philippines — Thomas Dooley is back as the Philippine Azkals coach after four years.

The former United States national team player, who called the Philippine men’s football team from 2014 to 2018, announced on his official Facebook account that he was reinstated as Azkals coach.

“Yes, I’m back and can’t wait to get started. We will change the direction we have been going for the last (four) years,” Dooley wrote on Wednesday.  “I am honored to coach our beloved team again. Players will be honored to wear this jersey with pride. Not just talking about it, showing it ON THE FIELD.”

The Philippine Football Federation (PFF) welcomed back Dooley as Scott Cooper’s replacement ahead of the team’s upcoming AFC Asian Cup qualifying from June 8 to 14 in Mongolia.

“We would like to welcome Coach Thomas Dooley back with the Men’s National Team,” said PFF president Mariano Araneta, Jr. in a statement. “We trust that he can take the team to greater heights in his second stint as head coach. We wish him and the team well as they prepare for the AFC Asian Cup 2023 qualifiers next month.”

Dooley last called the shots for the Philippine Azkals when they beat Tajikistan, 2-1,  to qualify for the 2019 AFC Asian Cup four years ago.

However, he was not offered a contract extension by the PFF and hired English coach Terry Butcher as his replacement.

The American coach is eager to pick up from where he left off for the men’s football program as he praised the success of the women’s national football team, which qualified for the Fifa World Cup early this year and won a historic bronze medal in the 31st Southeast Asian Games last Saturday.

“We will take the success back to where we left off together (four) years ago. I know it’s easier said than done. It will be difficult, but we will make it. We will fight, we will play football and we will win again. So let’s start together to help the Philippines Men’s National Team succeed,” Dooley said.

“Now let’s work hard to complete and top the 2022 success with the AZKALS. Thank you PFF for the trust. You will not regret it.”

Dooley and the Azkals will have a training camp in Manila starting on Thursday until June 3 before they fly to Mongolia for the qualifiers, where they are slated against Palestine, Yemen, and host Mongolia.