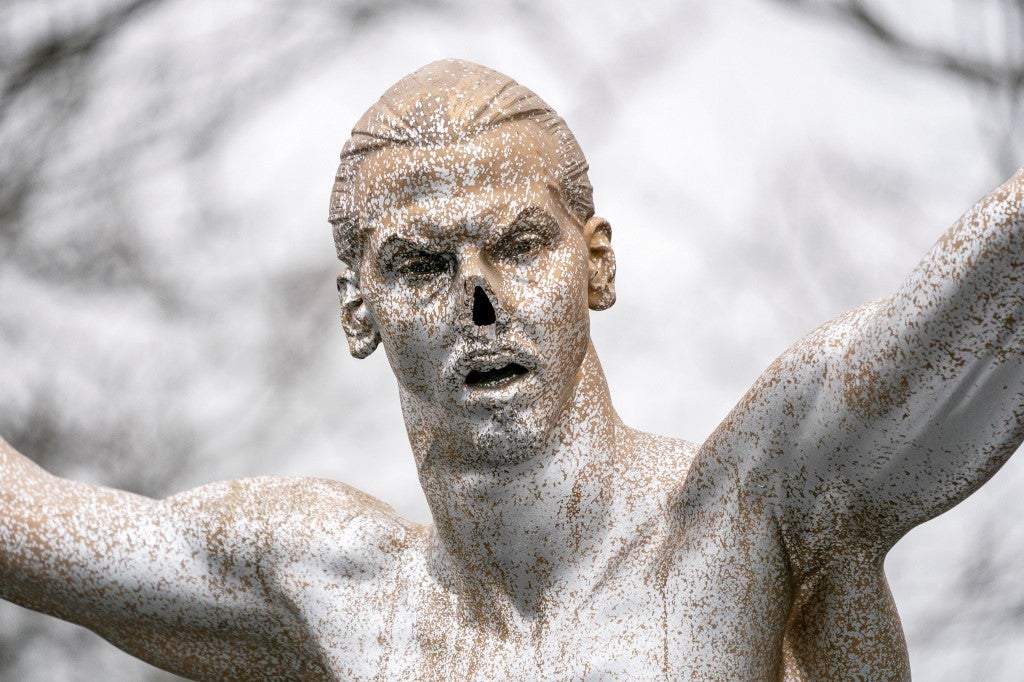 A picture taken on December 22, 2019 shows a detail of the bronze statue of iconic football player Zlatan Ibrahimovic after it was vandalised and had its nose chopped off in Malmo, Sweden. (Photo by Johan NILSSON / TT NEWS AGENCY / AFP) / Sweden OUT

Angry Swedish football fans are auctioning replicas of the sawn-off nose of a Zlatan Ibrahimovic statue to protest against the commercialization of the sport and what they perceive as the star’s betrayal.

The lifesize bronze statue of the Swedish superstar, erected in his hometown of Malmo in 2019, has been the target of numerous attacks since he invested in Stockholm-based football club Hammarby in November 2019, angering supporters of Malmo FF, the club where he began his professional career.

The statue’s nose was sawn off in December 2019, with the feet going the following month, causing it to collapse against the barrier protecting it.

Malmo FF fans said they had put three replicas of the original nose — which is still missing — up for auction “because choosing money over love can cost you dearly”.

Ibrahimovic “chose money over love of his hometown and the club where he began his career”, they wrote on the specially-created website www.vararnasan.se, Swedish for “where is the nose”.

“Football was originally a mass movement, but it has increasingly turned into a hyper-commercialised mass industry, where fans are seen as consumers and players and clubs are treated like merchandise”, they wrote.

The sellers said they planned to use the profits from the auction on efforts to combat “modern and commercial football and promote a sport where the focus is on love for the clubs and the game”.

The artist who made the bronze sculpture, Peter Linde, was upset about the auction.

“The sellers complain that football is turning the game into big business, but they themselves are making money off a crime”, he told daily Sydsvenskan.

Ibrahimovic wants to stay at AC Milan for life, ‘scared to stop playing’