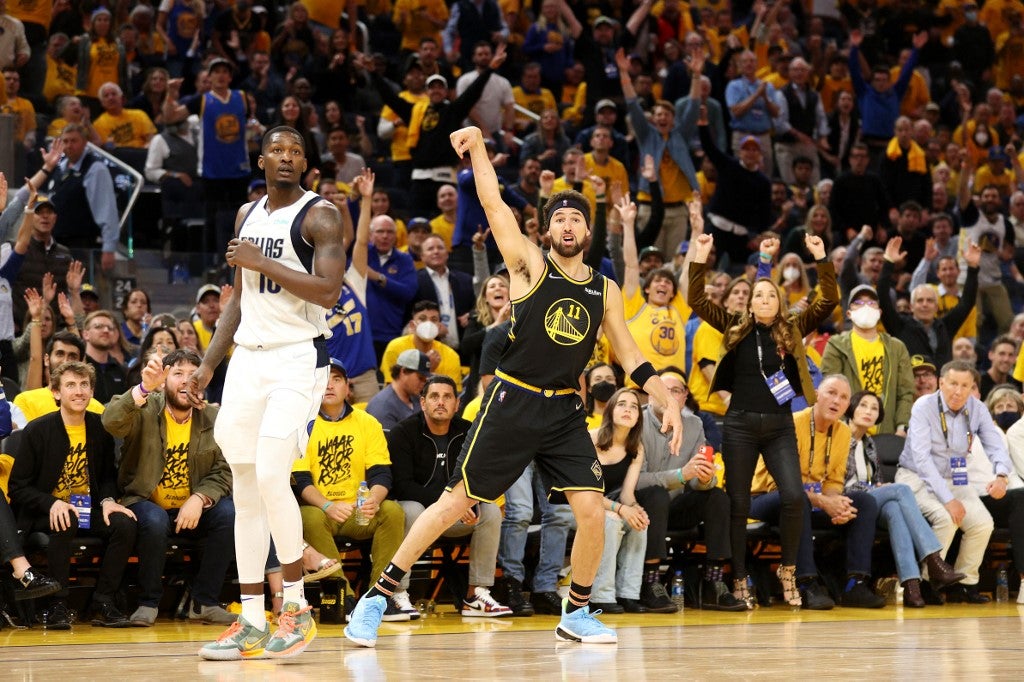 SAN FRANCISCO, CALIFORNIA – MAY 26: Klay Thompson #11 of the Golden State Warriors reacts after a three point basket during the fourth quarter against the Dallas Mavericks in Game Five of the 2022 NBA Playoffs Western Conference Finals at Chase Center on May 26, 2022 in San Francisco, California. The Golden State Warriors won 120-110 to advance to the NBA Finals. (Getty Images via AFP)

The Golden State Warriors will be headed down a familiar path next week.

And now they’ve shown the up-and-coming Dallas Mavericks the road.

Klay Thompson matched his season playoff-high with 32 points as the Warriors captured the Western Conference crown and earned their sixth trip to the NBA Finals in the last eight years with a 120-110 victory over the Mavericks in Game 5 on Thursday night in San Francisco.

The 2015, 2017 and 2018 NBA champs thus earned the right to go for another title in the best-of-seven NBA Finals, which will open in San Francisco on June 2.

Kevon Looney dominated the boards with a game-high 18 rebounds to help the Warriors, in their second opportunity, close out the Mavericks with a 4-1 triumph in the best-of-seven Western Conference finals.

“It was a helluva series,” assured Warriors coach Steve Kerr, whose teams have not lost a playoff series to a Western foe since he took over in 2015. “We had to battle like crazy, and we’re thrilled to have won.”

“It’s pretty amazing,” Kerr gushed. “It’s so difficult to get to the Finals. It’s frankly exhausting, stressful, emotions, physically tiring … all of that.

“For our team, our guys, especially the core group (of Thompson, Green, Curry and Andre Iguodala) to be a part of that six times in eight years … I don’t know what to say. It just takes an enormous amount of skill and determination and work, and I couldn’t be prouder of our guys.”

Luka Doncic had 28 points and Spencer Dinwiddie 26 for the Mavericks, who used a 15-0 run late in the third quarter to give themselves a chance after falling behind by as many as 25 points.

Poole ended the flurry and closed the third period with a layup that gave Golden State a 94-84 lead. When Wiggins and Green opened the final quarter with consecutive hoops, the Warriors began printing tickets to their first NBA Finals appearance since a loss to the Toronto Raptors in 2019.

“Unfortunately, we didn’t play our best game, and the season ended,” Mavericks coach Jason Kidd said. “We tip our hat to Golden State, but we accomplished a lot. It doesn’t mean we had a bad season. We just had a bad night.

“It means a lot (just to get to this point), especially with where we’ve been in the past. We’d be on our second vacation by now. This is just the start of an era.”

He nearly cried in an on-court interview with TNT after the win.

“I’m just so happy to be back,” he declared. “I’m so thankful for this team. These guys carried us to an incredible start. Then me coming back in there …

“I can’t believe we’re back (in the Finals). It’s crazy. I’m going to enjoy it tonight. Wow, we still have four more (wins) to go. I’m going to soak this in tonight.”

Looney’s rebound total included seven at the offensive end, helping Golden State to a commanding 51-34 edge overall and a 14-6 advantage in offensive boards. He also found time for 10 points, his second double-double of the series.

Dallas had the edge in 3-point scoring, thanks in large part to Dinwiddie’s 5-for-7 success from beyond the arc. The Mavericks shot 17-for-42 on 3-point tries, outscoring Golden State 51-42 from deep.

Doncic was harassed into just 10-for-28 shooting overall and 3-for-13 on 3-point attempts en route to his team-high point total. He also had team-highs in rebounds with nine and assists with six.

“We can all agree this wasn’t his best game,” Kidd said. “This is a great lesson for him. We need him to go big a lot of nights just to give us a chance. Unfortunately, the shots didn’t fall for him tonight.”

Dorian Finney-Smith had 13 points and Jalen Brunson 10 for Dallas, which lost all three games at Golden State in the series.