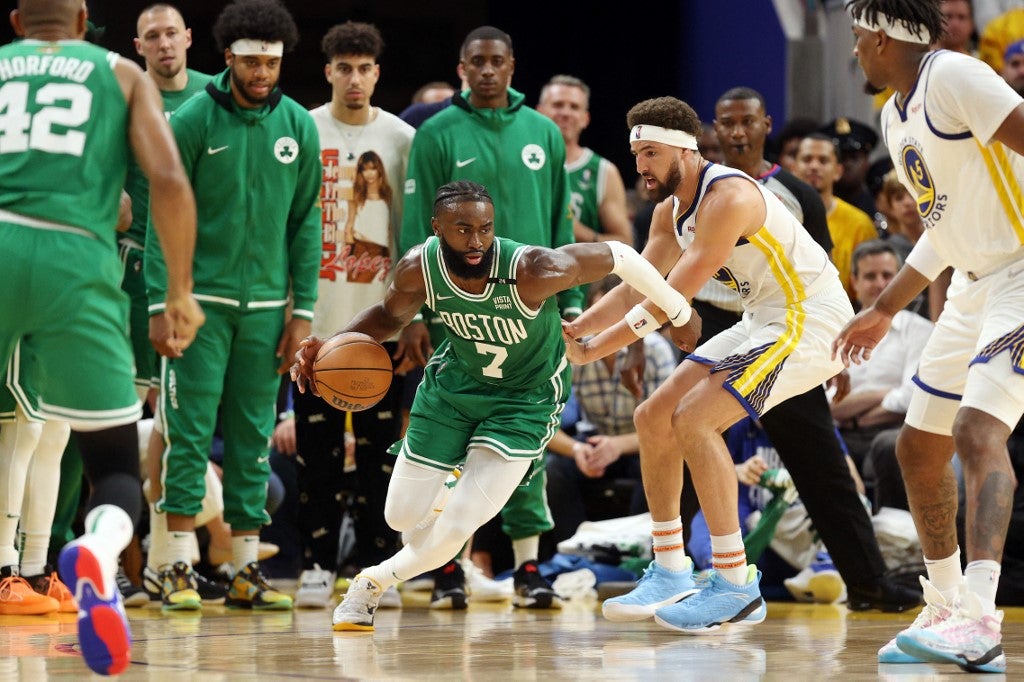 Jaylen Brown #7 of the Boston Celtics dribbles against Klay Thompson #11 of the Golden State Warriors during the fourth quarter in Game One of the 2022 NBA Finals at Chase Center on June 02, 2022 in San Francisco, California. Ezra Shaw/Getty Images/AFP

Al Horford and Derrick White are well down the list of go-to players on offense for the Boston Celtics.

Maybe that’s why the Golden State Warriors seemed to lose track of them on Thursday in Game 1 of the NBA Finals.

Jaylen Brown ignited a fourth-quarter flurry with 10 early points, Horford and White combined for four late 3-pointers and the Celtics continued their postseason road mastery with a 120-108 victory in the series opener at San Francisco.

Horford led a balanced attack with 26 points, Brown chipped in with 24 and White came up with 21 off the bench for the Celtics, giving the Eastern Conference champs a chance to go up 2-0 in the best-of-seven series on Sunday with another game on the Warriors’ floor.

Al Horford did not disappoint in his NBA Finals debut, leading the @celtics in scoring with 26 points and setting a record for three-pointers made in a Finals debut (6)! pic.twitter.com/YKr5IQgyXm

Golden State had been 9-0 at home in the playoffs entering the Finals.

Boston trailed by 12 entering the fourth period but outscored the Warriors 40-16 over the last 12 minutes.

“My gut reaction is: They just came in and played a helluva fourth quarter,” Warriors coach Steve Kerr said. “You have to give them credit. It’s as simple as that.”

In winning for the eighth time in 10 road games in the playoffs, the Celtics trailed 92-80 before opening the fourth period with a 9-0 burst that quickly closed the gap to three. Brown had 2- and 3-point hoops to ignite the run.

Brown added another trey and a layup, but Golden State temporarily was able to stave off the attack, retaining a 101-97 lead with 6:47 to go.

White and Horford then got going, combining for four consecutive 3-pointers and eventually getting help from Smart, who sank back-to-back treys, to win going away.

“My guys found me tonight and I just knocked them down,” said Horford, pointing to 33 Celtics assists, including 13 by Jayson Tatum.

Jayson Tatum on @celtics Head Coach Ime Udoka challenging him to be the best player he could be by improving his playmaking skills.

“The group that started the fourth quarter did a great job setting the tone,” he continued. “Jaylen attacking, Rob (Williams) got a lob dunk. That just got us going; and, from that point on, we just continued to fight.”

The made 3-pointers were playoff career highs for Horford and White.

“To beat Boston if they’re getting 21 3s and they’re getting a combined 11 from Horford and White … it’s going to be tough,” Kerr said. “They knocked down every shot in the fourth quarter. They just pounced. They took advantage of every opportunity.

“Boston just came in and deserved to win.” Marcus Smart #36 of the Boston Celtics reacts after his three point basket against the Golden State Warriors during the fourth quarter in Game One of the 2022 NBA Finals at Chase Center on June 02, 2022 in San Francisco, California. Ezra Shaw/Getty Images/AFP

Smart finished with 18 points as the Celtics won despite an off shooting night from star Tatum, who went just 3-for-17. He did manage 12 points to complete a double-double with his career-playoff-high assist total.

“Obviously good that we won this one,” Horford said. “Now get some rest. Those guys are really good at home. We know we have our hands full.”

Stephen Curry had a game-high 34 points and Andrew Wiggins 20 for the Warriors, who led by as many as 15 points and held the upper hand for most of the first 43 minutes. A majority of Curry’s points came on 7-for-14 shooting from beyond the arc.

Curry set a Finals record for a quarter with six 3-pointers on eight tries in the first period. However, he went on to endure a roller-coaster night. Curry was scoreless in the second quarter before adding nine points in the third but just four during the Warriors’ downfall in the fourth.

Klay Thompson added 15 points and Otto Porter Jr. 12 for the Warriors, who are making their sixth Finals appearance in the past eight years.