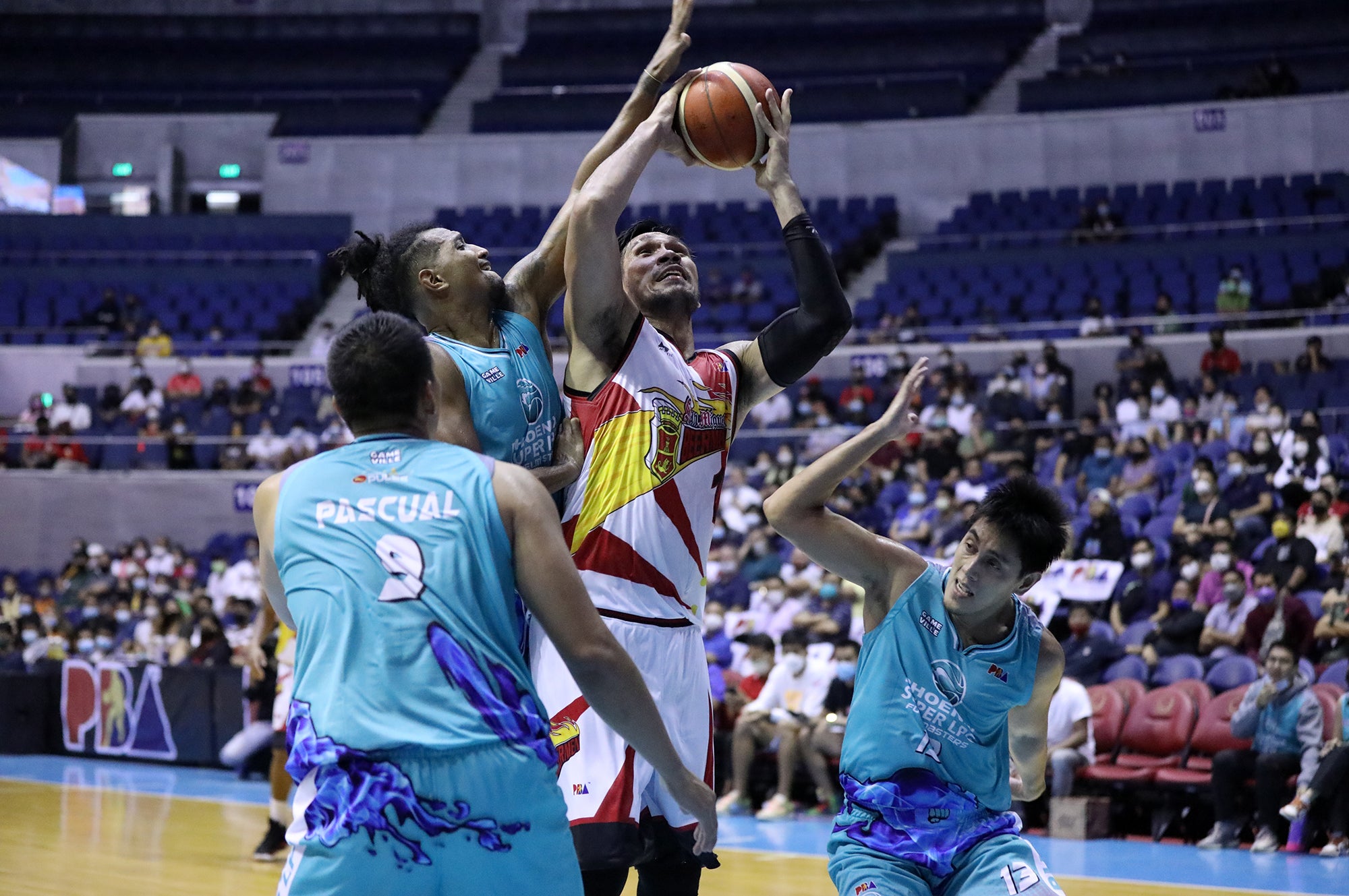 June Mar Fajardo goes up for a basket vs Phoenix defenders. –PBA IMAGES

MANILA, Philippines–Wary of the slow starts that usually hound its campaigns, San Miguel Beer on Wednesday night turned to its potent core of veterans for a 108-100 victory over hard-fighting Phoenix Super LPG at Smart Araneta Coliseum.

“We’re seeing there’s an opportunity,” said coach Leo Austria. “The past two seasons, two bubble (tournaments), you could all see that it was hard to push the players. Physically, mentally and emotionally, they are not in shape because of the pandemic.”

June Mar Fajardo, expectedly, figured as the spearhead of that charge, asserting dominance right from the jump on the way to 24 points, 15 rebounds, six assists and three blocks.

Vic Manuel finished with just as much, while Chris Ross chipped in 17 more as the Beermen opened their bid to reclaim the PBA Philippine Cup on a high note.

“This time, I think, they are seeing the difference. They’ve been saying this is our conference, the all-Filipino. But I told them we have to walk the talk,” he went on.

And they did just that.

Facing an enemy enjoying big nights from rookies Tyler Tio and Encho Serrano and skipper Matthew Wright, the Beermen kept it together for most of the night and then picked the most opportune time to uncork its killer blows.

Ross hit a heady layup with 18 seconds remaining. A Marcio Lassiter rebound in the next sequence then set up Fajardo for a clean look that ultimately sealed the final tally.

“I told the (players) that they will be the ones to decide what to do. That we’re just helping. I think this is the first time we had an off-season training, and we’re able to address the things we needed to (address), especially our chemistry,” said Austria.

“You all could see what they’ve been doing earlier. Though I think that that’s not enough. I’m expecting that the (coming games) will be hard for us because we’re the team to beat whenever it’s all-Filipino.”

Friday’s assignment is shaping up as a perfect opportunity to see whether the Beermen are up to the task. They play NLEX next, a club coming off a comeback victory over Terrafirma, 105-102, earlier in the day.

Austria eyes championship with ‘most dominant’ Fajardo back