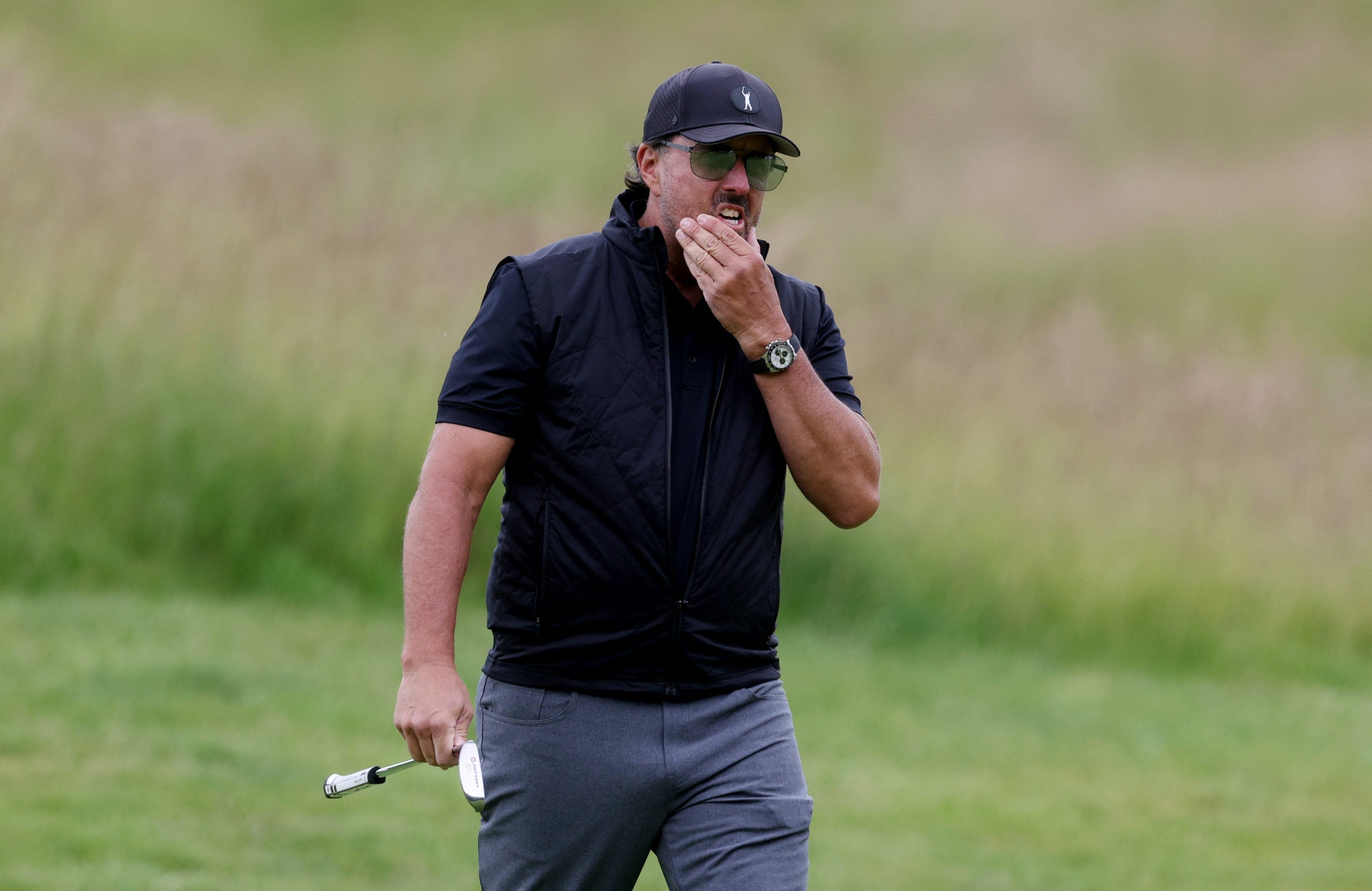 June 9, 2022 Team Hy Flyers Phil Mickelson of the U.S. during the first round in the he inaugural LIV Golf Invitational . Action Images via Reuters/Paul Childs

The PGA Tour suspended longtime fan favorite Phil Mickelson and all other members who decided to join the Saudi-backed LIV Golf Invitational Series that began on Thursday and said anyone else who makes the jump will face the same fate.

PGA Tour Commissioner Jay Monahan sent a letter to members not long after play in the lucrative breakaway series began outside London to address the 17 golfers who he said “decided to turn their backs” on the U.S.-based circuit.

“These players have made their choice for their own financial-based reasons. But they can’t demand the same PGA Tour membership benefits, considerations, opportunities and platform as you,” Monahan wrote. “That expectation disrespects you, our fans and our partners.

“You have made a different choice, which is to abide by the Tournament Regulations you agreed to when you accomplished the dream of earning a PGA Tour card and – more importantly – to compete as part of the preeminent organization in the world of professional golf.”

Mickelson, who counts six major championships among his 45 PGA Tour wins, former world number one Dustin Johnson and 2017 Masters winner Sergio Garcia are among the higher-profile golfers in the 48-player field at Centurion Club this week.

According to the memo, players who join the LIV series that threatens to blow apart men’s professional golf, are no longer eligible to participate in PGA Tour events, including the Presidents Cup and all other tours sanctioned by the circuit.

Even if players resigned from the tour ahead of the first LIV Golf event, as Johnson announced this week, they will not be permitted to play as a non-member via a sponsor exemption or any other eligibility category.

Both the PGA Tour and DP World Tour had declined requests from members who had asked for releases to compete at Centurion where $25 million is up for grabs, including $4 million for the winner.

Players who decided to take part in the inaugural LIV Golf have faced plenty of criticism given the alleged human rights abuses by the Saudi Arabian government.

The PGA Tour’s decision triggered a quick and scathing response from LIV Golf, which is bankrolled by Saudi Arabia’s Public Investment Fund and has lured players over with a $255 million purse spread over eight events this year.

“Today’s announcement by the PGA Tour is vindictive and it deepens the divide between the Tour and its members,” LIV Golf said in a statement.

“It’s troubling that the Tour, an organization dedicated to creating opportunities for golfers to play the game, is the entity blocking golfers from playing.

“This certainly is not the last word on this topic. The era of free agency is beginning as we are proud to have a full field of players joining us in London, and beyond.”

Monahan did not say how long the suspensions, which also impact former major winners Martin Kaymer, Graeme McDowell, Charl Schwartzel and Louis Oosthuizen, would be in place.

“What’s next? Can these players come back?,” wrote Monahan.

“Trust that we’re prepared to deal with those questions, and we’ll approach them in the same way we have this entire process: by being transparent and respecting the PGA Tour regulations that you helped establish.”

The decision by the PGA Tour, which does not run golf’s four majors, came after the United States Golf Association said it would allow LIV golfers to play in next week’s U.S. Open if they are exempt or had already qualified.

The Royal and Ancient, which runs the British Open, said it was not planning to comment on entry conditions until after the U.S. Open while organizers of next May’s PGA Championship said it would be premature to speculate.

Organizers of the Masters, traditionally held in April, did not respond when asked if they were evaluating entry conditions for the year’s first major.

Read Next
LeBron’s next NBA goal: ‘I want a team in Vegas’
EDITORS' PICK
Hidilyn Diaz wins only gold missing from her collection
Shop smarter with vivo’s big 12.12 holiday deals
The vivo Y02 is now available in the Philippines for only PHP 5,299
How not to retire as an ex-president
House energy committee chair Arroyo bats for cheap electricity
Lawmakers eyeing more changes in Maharlika plan
MOST READ
Jovit Baldivino, ‘Pilipinas Got Talent’ winner, dies at 29
Andi Eigenmann, family in Manila for a quick visit; Ellie dines with grandma Jaclyn Jose
LPA enters PAR, to likely strengthen into tropical depression in coming days – Pagasa
11 Filipino imports named to Japan B.League Asian All-Star team
Don't miss out on the latest news and information.